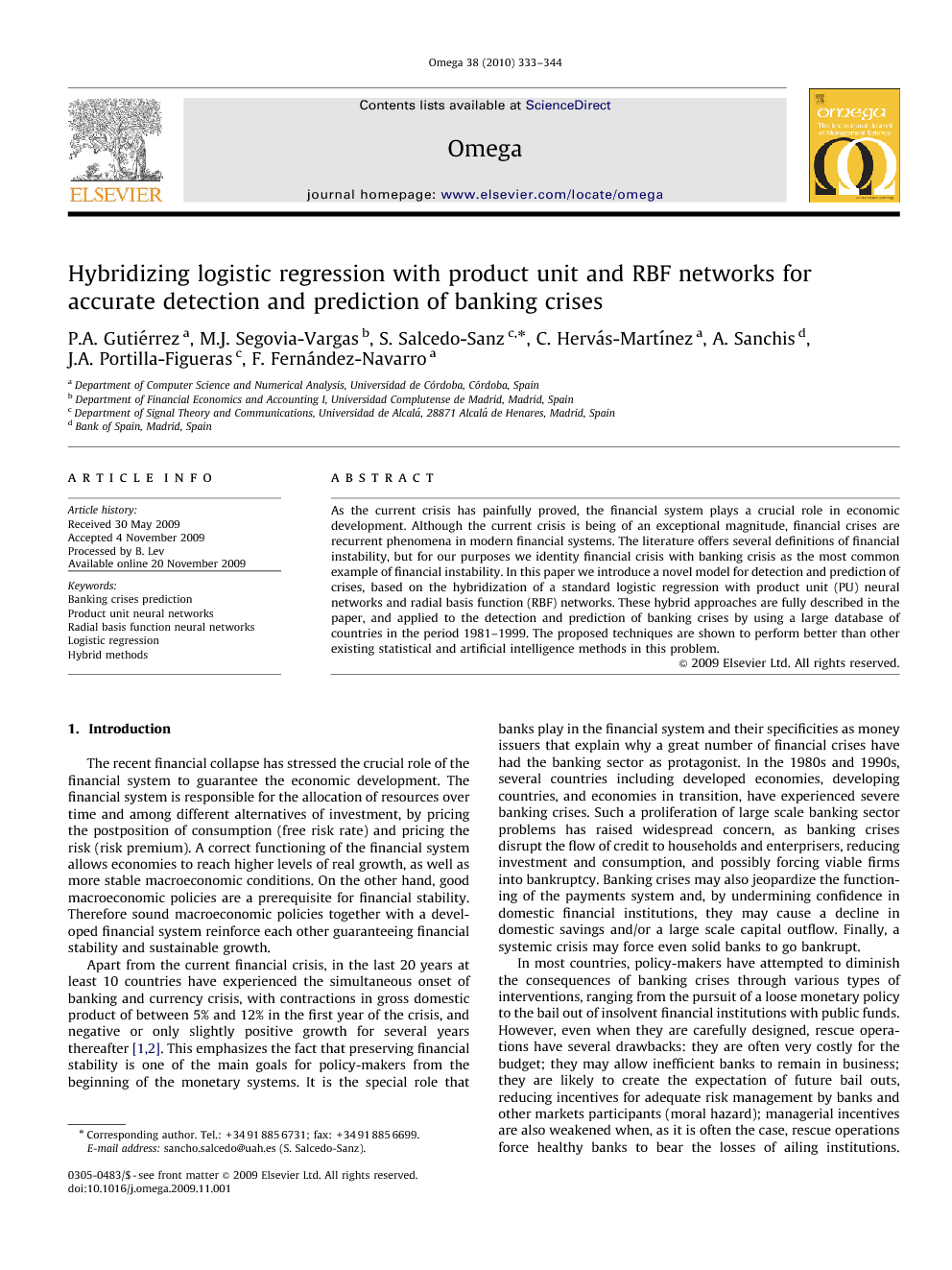 As the current crisis has painfully proved, the financial system plays a crucial role in economic development. Although the current crisis is being of an exceptional magnitude, financial crises are recurrent phenomena in modern financial systems. The literature offers several definitions of financial instability, but for our purposes we identity financial crisis with banking crisis as the most common example of financial instability. In this paper we introduce a novel model for detection and prediction of crises, based on the hybridization of a standard logistic regression with product unit (PU) neural networks and radial basis function (RBF) networks. These hybrid approaches are fully described in the paper, and applied to the detection and prediction of banking crises by using a large database of countries in the period 1981–1999. The proposed techniques are shown to perform better than other existing statistical and artificial intelligence methods in this problem.

In this paper we have presented several new hybrid algorithms mixing logistic regression with product unit neural networks (PUNNs) or radial basis function neural networks (RBFNNs) for detecting and predicting banking crises. Both hybrid approaches consist in the evolutionary training of a PUNN or a RBFNN using an evolutionary algorithm (EA). Once the basis functions have been determined by the EA, a transformation of the input space is considered. This transformation is performed by adding the non-linear transformations of the input variables given by the PU or RBF functions obtained by the EA. The final model obtained is linear in these new variables together with the initial covariates. In this paper we have tested these hybrid approaches in a Financial Crisis Database, formed by macroeconomic variables of 79 countries in the periods 1981–1997 (training data) and 1998–1999 (test data), and the corresponding crisis/no crisis decision variable. The hybrid models have been shown to be very strong in the problem of bank crisis prediction. The AUC measure has been presented and applied to the evaluation of the different models, since it avoids the use of arbitrary cut-off probabilities, evaluating the models for all possible thresholds. The results obtained have proven the good performance of the proposed approaches, that improve the results of other existing Statistical and Artificial Intelligence techniques in the problem of detecting and predicting banking crises.