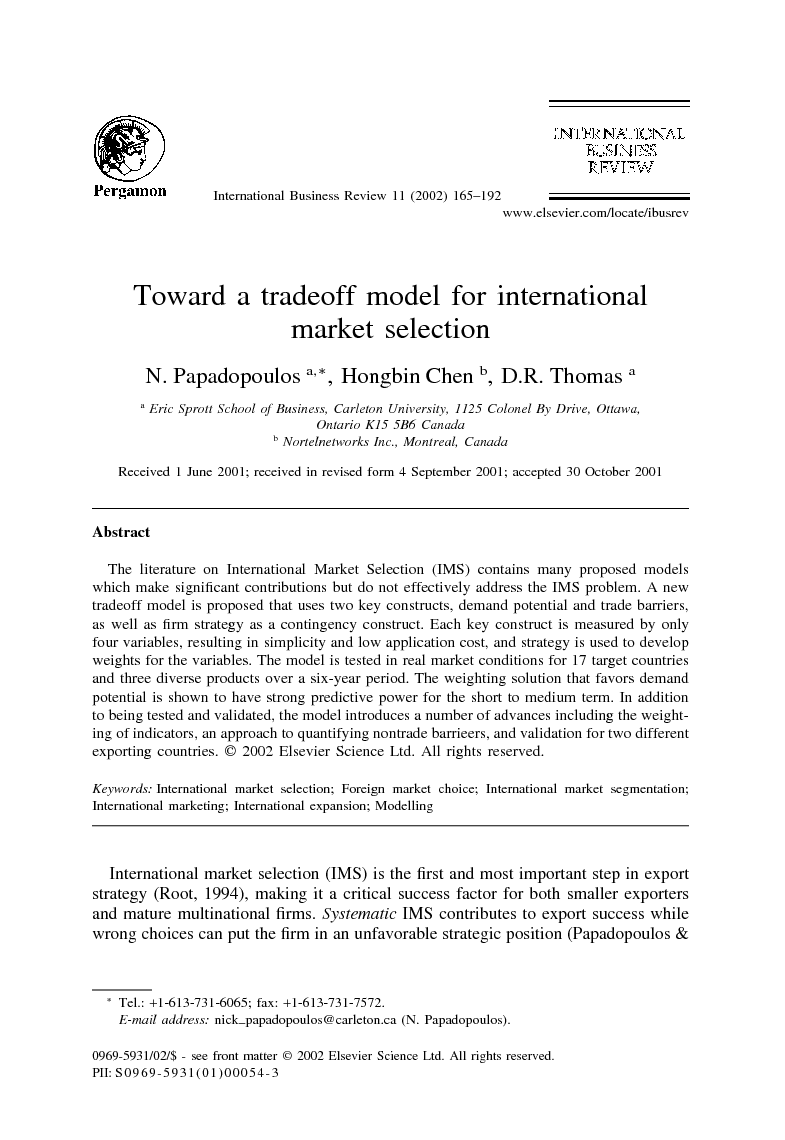 The literature on International Market Selection (IMS) contains many proposed models which make significant contributions but do not effectively address the IMS problems. A new tradeoff model is proposed that uses two key constructs, demand potential and trade barriers, as well as firm strategy as a contingency construct. Each key construct is measured by only four variables, resulting in simplicity and low application cost, and strategy is used to develop weights for the variables. The model is tested in real market conditions for 17 target countries and three diverse products over a six-year period. The weighting solution that favors demand potential is shown to have strong predictive power for the short to medium term. In addition to being tested and validated, the model introduces a number of advances including the weighting of indicators, an approach to quantifying nontrade barrieers, and validation for two different exporting countries.

International market selection (IMS) is the first and most important step in export strategy (Root, 1994), making it a critical success factor for both smaller exporters and mature multinational firms. Systematic IMS contributes to export success while wrong choices can put the firm in an unfavorable strategic position ( Papadopoulos & Denis, 1988). Given its importance, IMS attracted significant research attention from the 1960s to the mid-1980s. However, this interest waned in later years, mainly because of the difficulty in developing IMS models that would be generalizeable to various industries while also having adequate predictive power for business ( Douglas & Craig, 1992). As a result, the literature to date is limited to either general qualitative frameworks or operational models that have not been tested sufficiently, offer little or no evidence that they can in fact predict market attractiveness, and/or are too complex to apply in practice. On first review, a promising exception appeared to be the shift-share model ( Green & Allaway, 1985), which Douglas and Craig (1992) rightly called “the only new approach” to have been proposed in recent years. The model’s core strength is that it appears to be able to predict the industry-specific attractiveness of target markets using two simple and readily available measures: their import size and import growth rate. The model’s major apparent weakness is its exclusive reliance on import measures. Since exporters compete not only among themselves but also against domestic producers in the target countries, the initial intent of this research was to explore ways for extending the model to include total demand measures, in order to reflect the true attractiveness of potential target markets. However, an in-depth review indicated that the base model itself in fact lacks predictive power and is not well grounded theoretically. As a result, this study was revised to develop a new model that would build on the core logic of shift-share but also attempt to meet Douglas and Craig’s (1992: 301) call for “more sophisticated, parsimonious [market selection] techniques in a multi-country context”.