عنوان انگلیسی
An examination of the foreign market knowledge of exporting firms based in the People's Republic of China: Its determinants and effect on export intensity
دانلود فوری مقاله + سفارش ترجمه 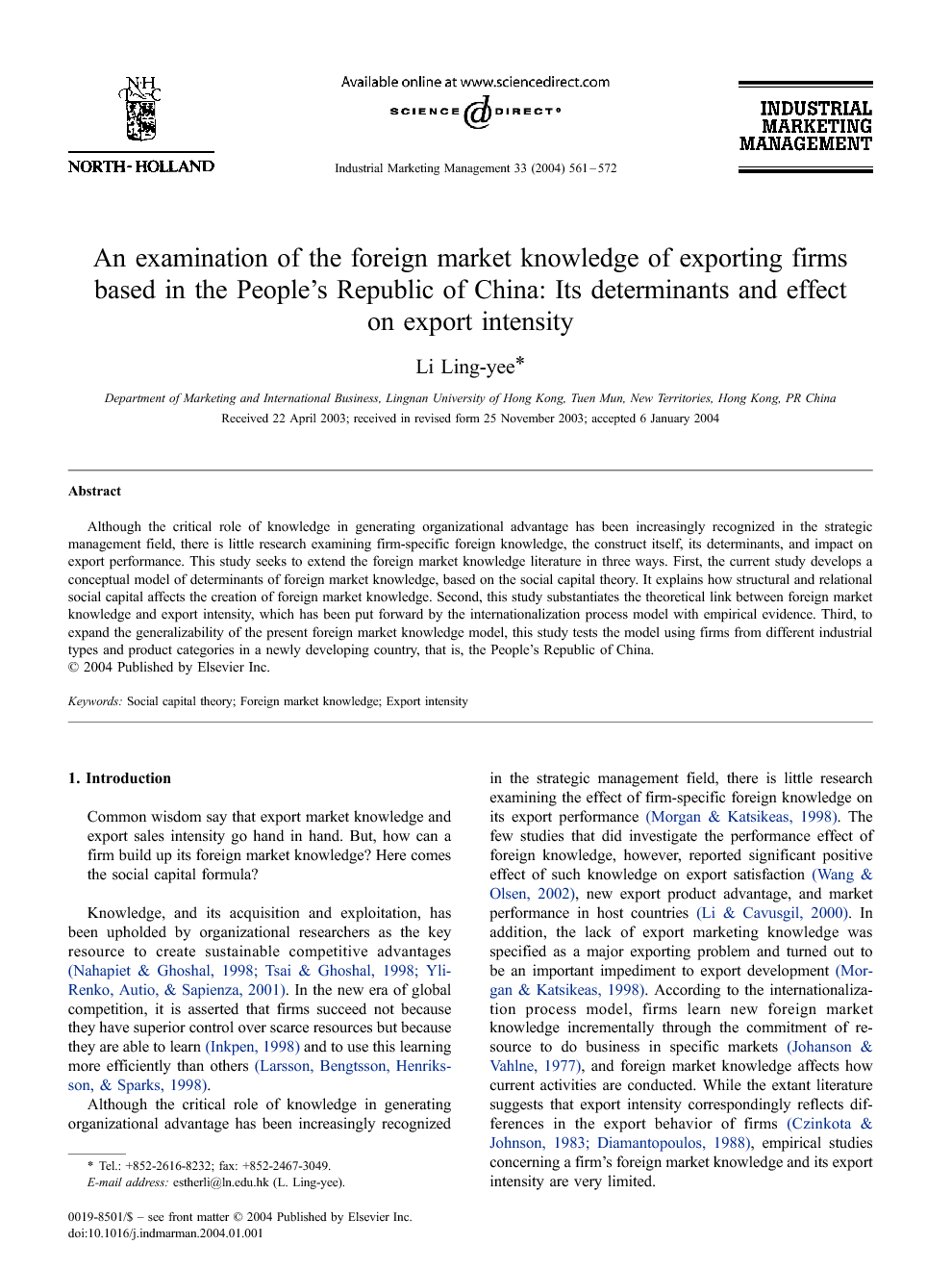 Common wisdom say that export market knowledge and export sales intensity go hand in hand. But, how can a firm build up its foreign market knowledge? Here comes the social capital formula? Knowledge, and its acquisition and exploitation, has been upholded by organizational researchers as the key resource to create sustainable competitive advantages Nahapiet & Ghoshal, 1998, Tsai & Ghoshal, 1998 and Yli-Renko et al., 2001. In the new era of global competition, it is asserted that firms succeed not because they have superior control over scarce resources but because they are able to learn (Inkpen, 1998) and to use this learning more efficiently than others (Larsson, Bengtsson, Henriksson, & Sparks, 1998). Although the critical role of knowledge in generating organizational advantage has been increasingly recognized in the strategic management field, there is little research examining the effect of firm-specific foreign knowledge on its export performance (Morgan & Katsikeas, 1998). The few studies that did investigate the performance effect of foreign knowledge, however, reported significant positive effect of such knowledge on export satisfaction (Wang & Olsen, 2002), new export product advantage, and market performance in host countries (Li & Cavusgil, 2000). In addition, the lack of export marketing knowledge was specified as a major exporting problem and turned out to be an important impediment to export development (Morgan & Katsikeas, 1998). According to the internationalization process model, firms learn new foreign market knowledge incrementally through the commitment of resource to do business in specific markets (Johanson & Vahlne, 1977), and foreign market knowledge affects how current activities are conducted. While the extant literature suggests that export intensity correspondingly reflects differences in the export behavior of firms Czinkota & Johnson, 1983 and Diamantopoulos, 1988, empirical studies concerning a firm's foreign market knowledge and its export intensity are very limited. In the light of the importance of knowledge as a central value-adding resource of firms, there are repeated calls Li & Cavusgil, 2000 and Morgan & Katsikeas, 1998 for additional research to identify the antecedents on foreign knowledge. Yet, little or no research works on it. For the few studies Chetty & Eriksson, 2002, Wang & Olsen, 2002 and Yli-Renko et al., 2002 that identified the antecedents of foreign knowledge, certain conceptual limitations and methodological shortcoming exist that warrant further consideration. First, researchers have either explained the variations of foreign knowledge by differences in firm-specific resources, like managers' awareness of export environment (Wang & Olsen, 2002), or by differences in relational commitment within the business network (Chetty & Eriksson, 2002). The researchers have largely neglected that the variations of foreign knowledge need to be accounted for by a combination of both internal resources-based and external relationship-specific factors. Second, the three empirical studies conducted on the antecedents of foreign market knowledge were sourced from research environments in developed countries like the United States, Finland, and Western European countries. Consequently, attempts to draw generalization from such evidence and to infer the same to other research context, like newly industrial countries or recently liberalized economies, can be misleading and potentially ill founded. Third, the generalizability of the results of the study of Yli-Renko et al. (2002) is constrained by its focus on technology-based, new firms. While the influence on foreign market knowledge was shown as predicted among technology-based new firms, whether the same general influences apply to medium- and low-technology firms demand further examination. In the light of the above limitations, this study seeks to extend the foreign market knowledge literature in three ways. First, the current study develops a conceptual model of determinants of foreign market knowledge, based on the social capital theory (Nahapiet & Ghoshal, 1998). The model covers two types of social capital, namely, intrafirm structural social capital and interfirm relational social capital, in explaining and testing their roles in creating foreign market knowledge. Second, this study substantiates the theoretical link between foreign market knowledge and export intensity, which has been put forward by the internationalization-process model (Johanson & Vahlne, 1977), with empirical evidence. Third, to expand the generalizability of the present foreign market knowledge model, this study tests the model using firms from different industrial types and product categories in a newly developing country, that is, the People's Republic of China.