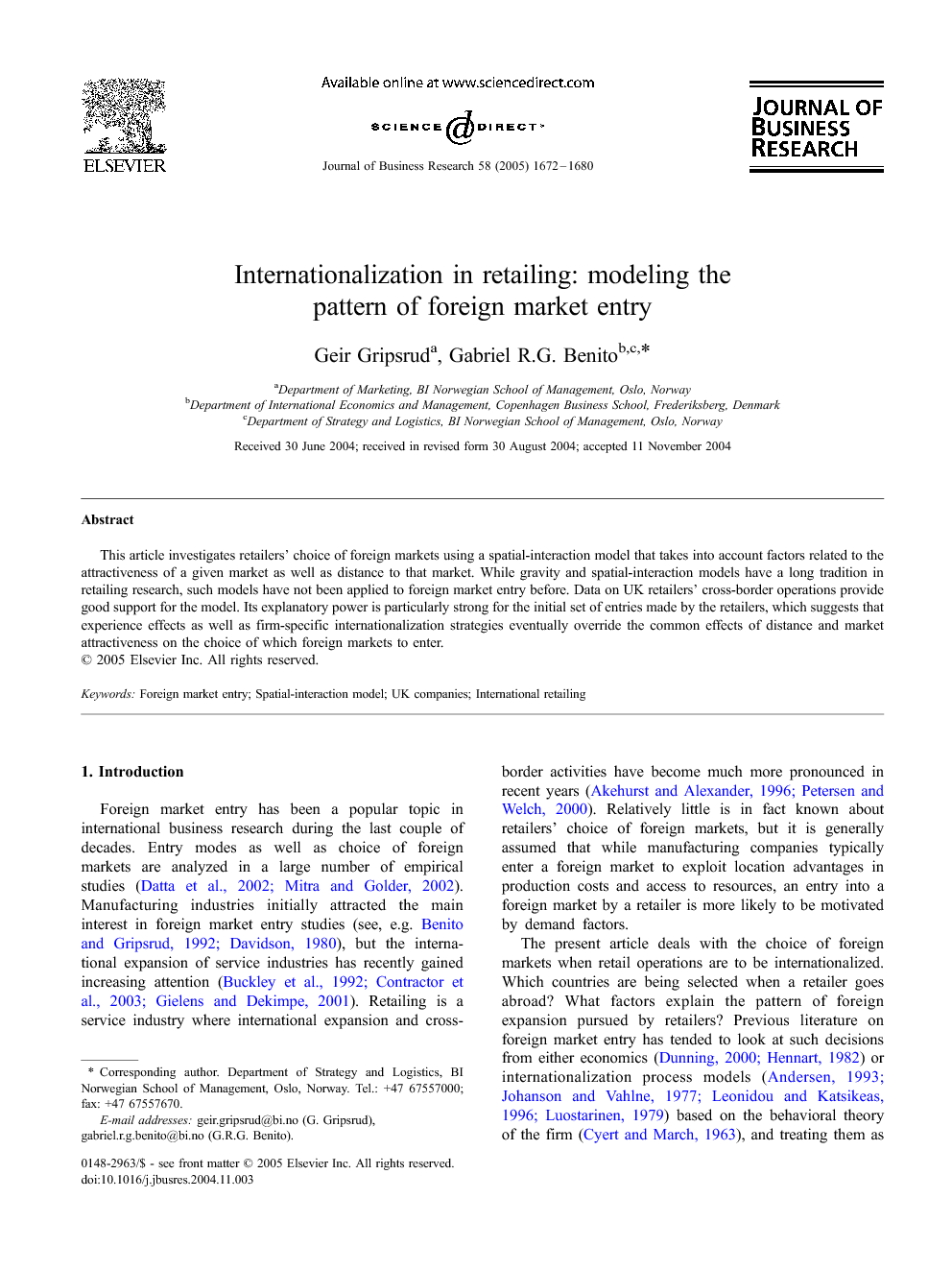 This article investigates retailers' choice of foreign markets using a spatial-interaction model that takes into account factors related to the attractiveness of a given market as well as distance to that market. While gravity and spatial-interaction models have a long tradition in retailing research, such models have not been applied to foreign market entry before. Data on UK retailers' cross-border operations provide good support for the model. Its explanatory power is particularly strong for the initial set of entries made by the retailers, which suggests that experience effects as well as firm-specific internationalization strategies eventually override the common effects of distance and market attractiveness on the choice of which foreign markets to enter.

Foreign market entry has been a popular topic in international business research during the last couple of decades. Entry modes as well as choice of foreign markets are analyzed in a large number of empirical studies (Datta et al., 2002 and Mitra and Golder, 2002). Manufacturing industries initially attracted the main interest in foreign market entry studies (see, e.g. Benito and Gripsrud, 1992 and Davidson, 1980), but the international expansion of service industries has recently gained increasing attention (Buckley et al., 1992, Contractor et al., 2003 and Gielens and Dekimpe, 2001). Retailing is a service industry where international expansion and cross-border activities have become much more pronounced in recent years (Akehurst and Alexander, 1996 and Petersen and Welch, 2000). Relatively little is in fact known about retailers' choice of foreign markets, but it is generally assumed that while manufacturing companies typically enter a foreign market to exploit location advantages in production costs and access to resources, an entry into a foreign market by a retailer is more likely to be motivated by demand factors. The present article deals with the choice of foreign markets when retail operations are to be internationalized. Which countries are being selected when a retailer goes abroad? What factors explain the pattern of foreign expansion pursued by retailers? Previous literature on foreign market entry has tended to look at such decisions from either economics (Dunning, 2000 and Hennart, 1982) or internationalization process models (Andersen, 1993, Johanson and Vahlne, 1977, Leonidou and Katsikeas, 1996 and Luostarinen, 1979) based on the behavioral theory of the firm (Cyert and March, 1963), and treating them as essentially competing approaches (Datta et al., 2002). Despite the emerging recognition that the theoretical perspectives complement each other (Benito and Welch, 1994), few attempts have been made to bring their strong points together; possibly due to a perceived lack of modeling tools that could adequately integrate the main attributes of the various approaches. Our aim is to develop a model of foreign market choice with a micro-foundation concerning human choice behavior. In this article we argue that a spatial-interaction model may be highly relevant for analyzing the impact of various factors on the choice of foreign markets to enter. That model can accommodate both factors drawn from economics approaches–e.g. the purchasing power and size of markets–and factors drawn from the internationalization process approach, such as the distance to a market. The proposed probability model summarizes the impact of various factors on the outcome of the location choices and makes it possible to estimate the effect of each factor. To the best of our knowledge, the model has not been applied to the choice of foreign markets before. The remainder of this article is organized as follows: In the next section, we briefly review literature dealing with retailers' choice of foreign markets. Following that, we present our model and describe the data and measures used in the study. Then, we present our results and conclude with a discussion of key findings, limitations of the study and possible directions for future research.