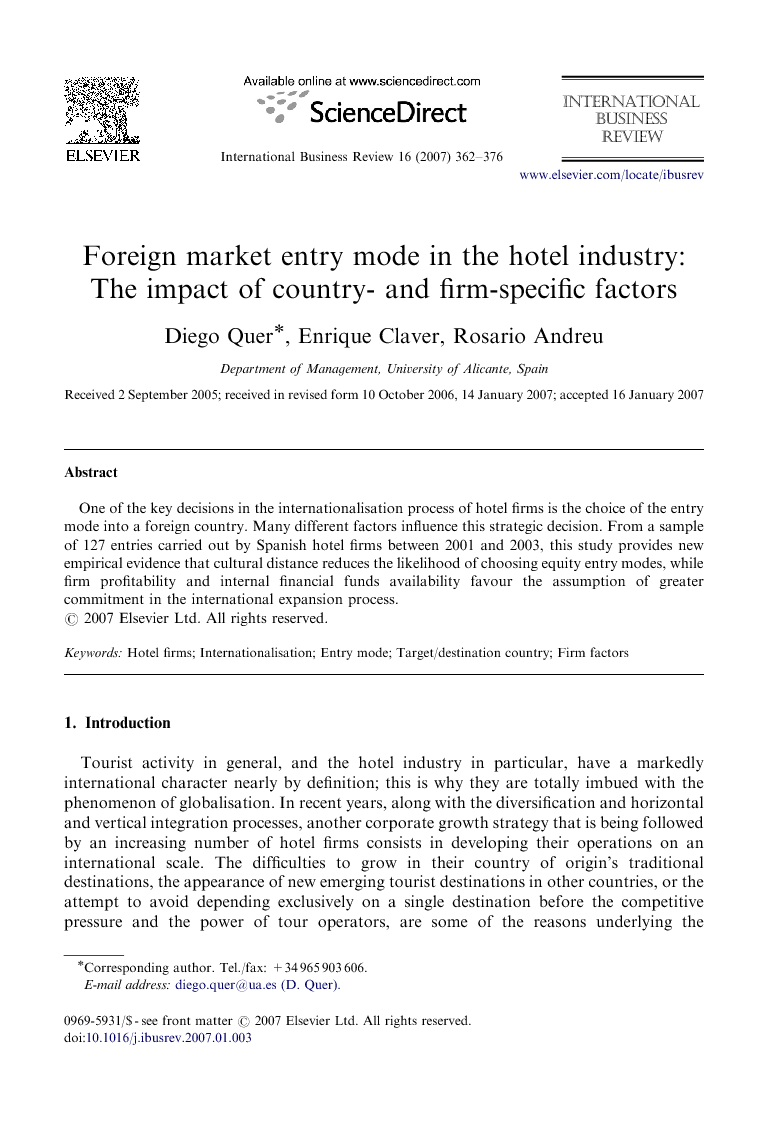 One of the key decisions in the internationalisation process of hotel firms is the choice of the entry mode into a foreign country. Many different factors influence this strategic decision. From a sample of 127 entries carried out by Spanish hotel firms between 2001 and 2003, this study provides new empirical evidence that cultural distance reduces the likelihood of choosing equity entry modes, while firm profitability and internal financial funds availability favour the assumption of greater commitment in the international expansion process.

Tourist activity in general, and the hotel industry in particular, have a markedly international character nearly by definition; this is why they are totally imbued with the phenomenon of globalisation. In recent years, along with the diversification and horizontal and vertical integration processes, another corporate growth strategy that is being followed by an increasing number of hotel firms consists in developing their operations on an international scale. The difficulties to grow in their country of origin's traditional destinations, the appearance of new emerging tourist destinations in other countries, or the attempt to avoid depending exclusively on a single destination before the competitive pressure and the power of tour operators, are some of the reasons underlying the internationalisation strategies implemented by Spanish hotel firms. Since the first relevant international operation carried out by a Spanish chain in the mid-1980s (Sol Meliá in Bali, Indonesia), this type of strategies have grown exponentially until the present day, when we find over 600 Spanish hotels in about 50 countries. One of the critical decisions in that internationalisation process is the choice of an entry mode. This decision is determined not only by the specific characteristics of the firm and of the country where the entry operation is planned, but also by the distinctive features of the hotel business. The analysis of the factors influencing the choice of an entry mode is one of the research topics most commonly treated in the literature on international business. Although most works have tended to focus on manufacturing firms, a growing interest has recently developed in analysing the peculiarities of service firms when it comes to adopting this strategic decision (Brouthers & Brouthers, 2003; Ekeledo & Sivakumar, 2004; Sánchez & Pla, 2006). Among the second group of research studies can be found some that have dealt with this issue in relation to the hotel industry; they are less numerous though (Brown, Dev, & Zhou, 2003; Contractor & Kundu, 1998; Erramilli, Agarwal, & Dev, 2002; Pla & León, 2002; Ramón, 2002). Within this framework, our paper seeks to complement the existing contributions by providing new empirical evidence about the way in which factors linked with the target country and the firm itself have determined the entry modes used by Spanish hotel firms in their most recent internationalisation process (2001–2003). With this aim in mind, the paper is structured as follows. In the first place, we will show the peculiar characteristics of the hotel industry and the way in which they affect the entry mode, after which, based on a thorough literature review, a number of hypotheses will be proposed. Once the characteristics of the sample and the data used have been presented, we will offer the results obtained. The paper will finally offer some conclusions and will equally refer to some of the contributions made by this research as well as its limitations, after which future orientations will be suggested that can help scholars to make further progress in this line of research.

This research allows us to conclude that the resource commitment assumed with the decisions to enter foreign countries made by Spanish hotel firms in recent years has been determined both by factors linked with the target country and by others associated with the companies themselves. On the one hand, it was checked that the smaller cultural distance existing in Latin America with respect to other world regions has led to a preference to enter via FDI, to the detriment of contractual cooperation agreements. On the other hand, two ex-ante factors like the initial profitability and the availability of internal financial funds turned out to be resources favouring the hotel firms’ decision to choose that investing alternative in their internationalisation process. Moreover, our results suggest that the entry mode decision is also influenced by other location-specific factor, although with low significance. Rising levels of equity and control are negatively associated with the GDP in the country where the hotel firm is located. Our study on hotel firms shows some results contrary to those found in several manufacturing sectors. Some of the underlying arguments regarding the influence of cultural distance and country risk on the choice of equity entry modes seem to require a reinterpretation in the hotel industry, building on Transaction Cost Economics. Cultural distance can make it difficult to establish contractual agreements and increase the costs of transferring knowledge to other organisations. Furthermore, before a high target country risk, internalisation may be a better option than contractual agreements in order to avoid the possible opportunistic behaviour of a local partner. The lack of support for a positive relationship between firm size and equity entry modes suggests a different argument. A network of franchisees and hotels under management service agreements enable hotel firms to capture some of the advantages of global supplies, reservations or brand recognition. In addition, our finding regarding the negative impact of GDP on equity entry modes needs further research before a meaningful conclusion can be drawn. As was suggested above, FDI of hotel companies may depend not only on general market conditions but also on specific determinants of tourism potential. In our opinion, this study provides contributions in several contexts. Concerning the implications for extant theory, our results suggest that a theory of entry mode choice in the hotel industry cannot rest only on conditions in the host country environment. Similarly, firm-specific factors can provide only a partial explanation. A complete theoretical framework of entry mode choice in the hotel industry is therefore necessary, including factors linked with the location country and the hotel companies themselves. On the other hand, we think that having provided new empirical evidence, with information at the level of individual firms, about one of the most important research issues in international business—the entry mode choice—has made it possible to complement the still scant research done about hotel firms in this field. This issue becomes even more relevant if we consider that internationalisation is undoubtedly one of the main growth strategies that hotel firms must follow if they want to maintain and improve their competitive advantages in the tourism industry, which plays an important role for the economy of many countries. Nevertheless, we are aware of the fact that our study has some limitations, mainly derived from the nature of the data we have worked with. For this reason, it was not possible to incorporate other variables which can also determine the entry mode, e.g. the firm's international experience, its technological and commercial capabilities or the actual perceptions of the managers involved. These limitations could be overcome in future research works, above all as far as obtaining primary data is concerned. Replicating this research in other service industries would also be beneficial in order to accumulate findings and compare among models of entry mode choice. Furthermore, another interesting line of future research would be to analyse the effects of information and communications technologies, especially the Internet, on foreign market expansion by hotel firms, e.g. on the speed of their internationalisation process.