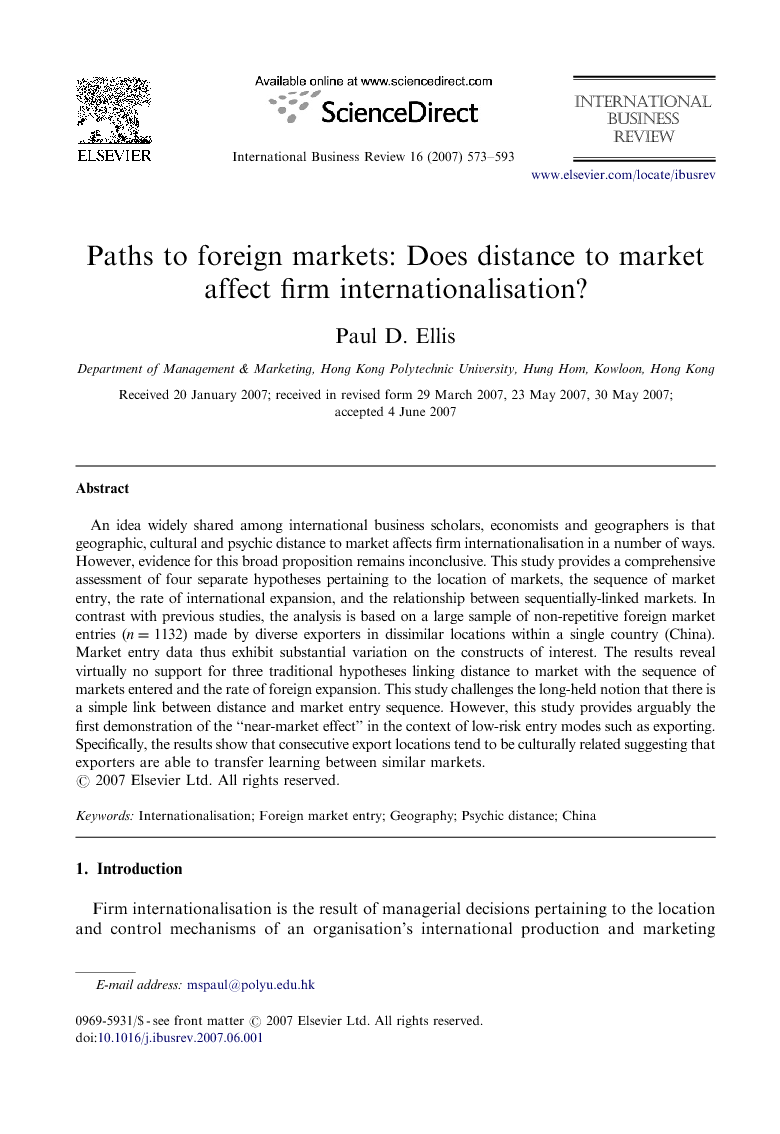 An idea widely shared among international business scholars, economists and geographers is that geographic, cultural and psychic distance to market affects firm internationalisation in a number of ways. However, evidence for this broad proposition remains inconclusive. This study provides a comprehensive assessment of four separate hypotheses pertaining to the location of markets, the sequence of market entry, the rate of international expansion, and the relationship between sequentially-linked markets. In contrast with previous studies, the analysis is based on a large sample of non-repetitive foreign market entries (n=1132) made by diverse exporters in dissimilar locations within a single country (China). Market entry data thus exhibit substantial variation on the constructs of interest. The results reveal virtually no support for three traditional hypotheses linking distance to market with the sequence of markets entered and the rate of foreign expansion. This study challenges the long-held notion that there is a simple link between distance and market entry sequence. However, this study provides arguably the first demonstration of the “near-market effect” in the context of low-risk entry modes such as exporting. Specifically, the results show that consecutive export locations tend to be culturally related suggesting that exporters are able to transfer learning between similar markets.

Firm internationalisation is the result of managerial decisions pertaining to the location and control mechanisms of an organisation's international production and marketing activities. This process has been scrutinised in research relating to the selection of foreign markets (Brewer, 2001; Davidson, 1983; Dow, 2000; Ellis & Pecotich, 2001), the modes of control used to enter those markets (Edwards & Buckley, 1998; Kogut & Singh, 1988), and the timing of market entry (Mitra & Golder, 2002). Much of this extant work is decision-oriented; which market? how? and when? Consequently little is known about whether the cumulative outcomes of these choices describe broader patterns of decision-making. In short, do firms’ paths to foreign markets conform to predictable decision-making templates? One possible answer is that expansion patterns are constrained by the costs of overcoming distance to market, however defined (Benito & Gripsrud, 1992; Davidson, 1980; Ghemawat, 2001; Johanson & Wiedersheim-Paul, 1975; Linmão & Venables, 2001). At first glance the friction of distance seems out of place in this age of global markets and cheap communications (Cairncross, 2001). But the evidence suggests otherwise. Based on his extensive analysis of freight expenditures, Hummels (1999) reported that while air transport prices have fallen dramatically in the post-war era, shipping costs have not declined. The link between distance, shipping costs and trade represents one of the more prominent questions being addressed by economists, geographers and international business researchers in recent years (Clark, Dollar, & Micco, 2004; Hummels, 1999; Linmão & Venables, 2001; Mellinger, Sachs, & Gallup, 2000). A typical conclusion from this body of work is the one returned by Linmão and Venables (2001). Drawing on their analysis of shipping costs from Baltimore, these authors calculated that a 10% increase in transport costs reduces trade volumes by 20%. A similar relationship is expressed in Frankel and Rose's (2002) statistic that bilateral trade declines about 1% for every percentage increase in the distance separating a pair of countries. Based on his own reading of Frankel and Rose's data, Ghemawat (2001, p. 138) concluded, “The amount of trade that takes place between countries 5000 miles apart is only 20% of the amount that would be predicted to take place if the countries were 1000 miles apart.” These numbers support the idea that, “contrary to popular impression, the world is not getting dramatically smaller” (Leamer & Levinsohn, 1995, p. 1387), that “distance still matters” (Ghemawat, 2001), and that the much-publicised “death of distance” (Cairncross, 2001) has been greatly exaggerated. If the internationalisation process of the firm reflects a pattern of increasing distance to market, empirical verification should be a relatively straightforward matter. Yet after some 50 years of research few conclusions can be drawn. Geographic distance effects which are often seen at the macro-level (e.g., Beckerman, 1956; Frankel & Rose, 2002; Leamer, 1974; Linmão & Venables, 2001), are rarely observed at the level of the firm (e.g., Czinkota & Ursic, 1987; Terpstra & Yu, 1988). Cultural and psychological distance effects measured in one country (e.g., Johanson & Wiedersheim-Paul, 1975), do not seem to operate in other countries (e.g., Ellis, 2000), or even in the same country with a different sample of firms (e.g., Engwall & Wallenstål, 1988). Some of these inconsistencies may be attributed to the mixing and matching of dissimilar entry modes. Effects observed in a sample of exporters (e.g., Dow, 2000) may not hold for higher risk expansion activities such as foreign direct investment where cost savings stemming from internalisation or location advantages come into play (e.g., Benito & Gripsrud, 1992). In ventures involving substantial commitments of company resources, the marginally increasing costs associated with overcoming distance to market may not be sufficient to tip the balance in favor of one investment location over another. A bigger part of the problem may be empirical. In contrast with the well-documented gravity model which explains trade between nations, at the level of the firm the accumulated evidence relating to distance effects is highly fragmentary. Aside from a lack of consensus on matters of operationalisation (Combes & Lafourcade, 2005; Dow, 2000), empirical expansion patterns are often sought from samples containing very few firms or very few market entries. Even when large numbers are involved, firm-level expansion patterns may be insufficiently spread out to permit meaningful analysis. When two-thirds of a sample of investors fails to make a second foreign investment, as was the case with Benito and Gripsrud's (1992) study of Norwegian manufacturers, it is difficult to see how conclusions regarding dynamic patterns of expansion can be drawn. The aim of this study is to redress some of these shortcomings by examining the effects of distance on the internationalisation patterns of three diverse groups of Chinese exporters. This study's contribution is primarily empirical as is warranted by the state of current research. To increase the chances of detecting distance effects, and to balance a research bias favouring relatively high-risk foreign investments, the scope of the study is limited to direct exporting, a low-risk entry mode involving production in the home market.