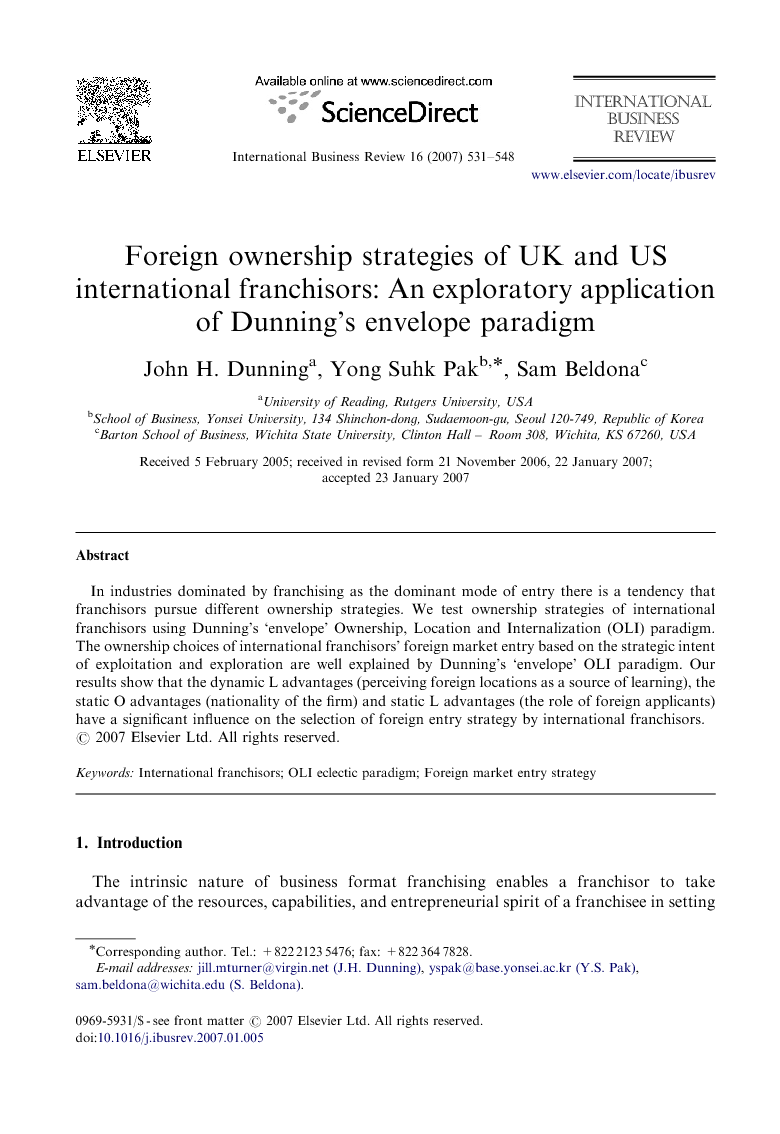 In industries dominated by franchising as the dominant mode of entry there is a tendency that franchisors pursue different ownership strategies. We test ownership strategies of international franchisors using Dunning's ‘envelope’ Ownership, Location and Internalization (OLI) paradigm. The ownership choices of international franchisors’ foreign market entry based on the strategic intent of exploitation and exploration are well explained by Dunning's ‘envelope’ OLI paradigm. Our results show that the dynamic L advantages (perceiving foreign locations as a source of learning), the static O advantages (nationality of the firm) and static L advantages (the role of foreign applicants) have a significant influence on the selection of foreign entry strategy by international franchisors.

Previous research has shown that the franchising format enables franchisors to enjoy diversified sources of revenue by expanding into overseas markets without taking the full responsibility of the operational results (Caves & Murphy, 1976). An exogenous franchisor can lower the risk of foreign operations by signing contracts with local franchisees, which can manage and take full responsibility for the operation of foreign outlets. Accordingly, most domestic franchisors enter overseas markets via the non-equity entry mode. However, there still remain a few franchisors that prefer to access foreign markets by investing financial and managerial assets and resources. We believe that the underlying strategic rationale of this group needs to be highlighted because of its implication for the future competitiveness of firms. In his ‘envelope’ paradigm, Dunning (2000) tried to embrace asset-seeking foreign direct investment. Dunning's eclectic paradigm served both as an envelope of context-specific theories and as a common analytical framework for understanding foreign value-added activities. As contextual theories have mainly been applied to explain the selection of entry mode in the field of international franchising research, this paper empirically tests Dunning's OLI paradigm. By embracing the asset-augmenting motivation for FDI, the ‘envelope’ OLI paradigm provides an opportunity to understand the foreign activities of multinational franchisors not only through the conventional view of market seekers but also through the evolutionary view of knowledge learners. The traditional understanding of domestic franchisors trying to maximize rent extraction by engaging in international operations needs to be complemented with a dynamic view of firms which are seeking to build core competencies and knowledge by matching their competitive advantages to global markets. Our research has demonstrated that franchisors with different foreign ownership strategies have different global strategic objectives and a different understanding of foreign locations and partners as sources of dynamic learning. Our findings lend credence to the theory that because hierarchies are considered more appropriate than the external markets as a mode of gaining new knowledge, international franchisors with equity modes may be expected to have greater strategic motivation to learn or gain competitiveness overseas. They also lend support to the significance of country of origin specific factors in understanding firms’ behaviors. Multinational franchisors mainly from the US show their strong preference of entering foreign markets by contracting qualified foreign applicants, while those from the UK are willing to take financial and managerial commitments to access new know-how in foreign locations. Based on an evolutionary view of international franchising operations, more dynamic research on the networking of international franchisors and local franchisees is recommended.