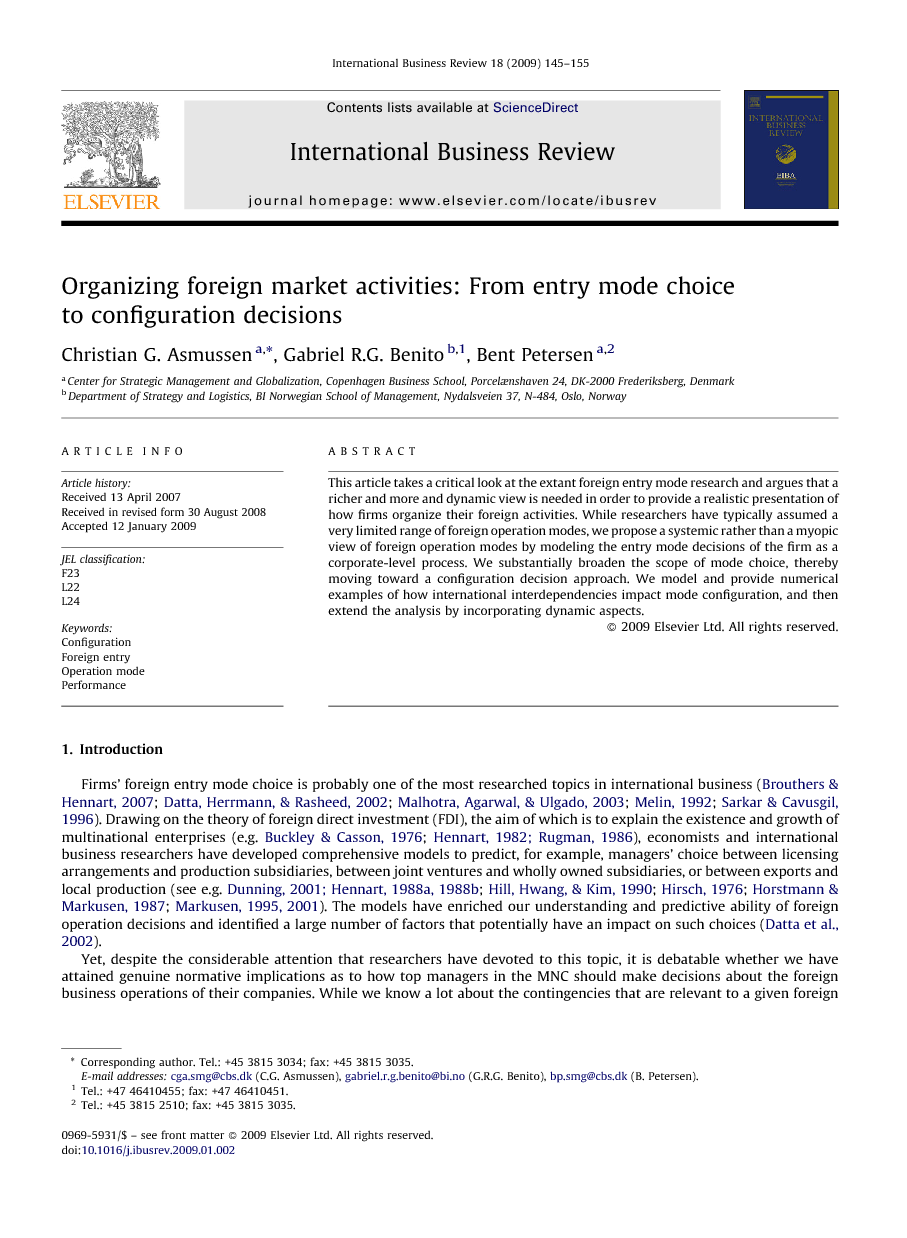 This article takes a critical look at the extant foreign entry mode research and argues that a richer and more and dynamic view is needed in order to provide a realistic presentation of how firms organize their foreign activities. While researchers have typically assumed a very limited range of foreign operation modes, we propose a systemic rather than a myopic view of foreign operation modes by modeling the entry mode decisions of the firm as a corporate-level process. We substantially broaden the scope of mode choice, thereby moving toward a configuration decision approach. We model and provide numerical examples of how international interdependencies impact mode configuration, and then extend the analysis by incorporating dynamic aspects.

Firms’ foreign entry mode choice is probably one of the most researched topics in international business (Brouthers & Hennart, 2007; Datta, Herrmann, & Rasheed, 2002; Malhotra, Agarwal, & Ulgado, 2003; Melin, 1992; Sarkar & Cavusgil, 1996). Drawing on the theory of foreign direct investment (FDI), the aim of which is to explain the existence and growth of multinational enterprises (e.g. Buckley & Casson, 1976; Hennart, 1982 and Rugman, 1986), economists and international business researchers have developed comprehensive models to predict, for example, managers’ choice between licensing arrangements and production subsidiaries, between joint ventures and wholly owned subsidiaries, or between exports and local production (see e.g. Dunning, 2001, Hennart, 1988a and Hennart, 1988b; Hill, Hwang, & Kim, 1990; Hirsch, 1976; Horstmann & Markusen, 1987; Markusen, 1995 and Markusen, 2001). The models have enriched our understanding and predictive ability of foreign operation decisions and identified a large number of factors that potentially have an impact on such choices (Datta et al., 2002). Yet, despite the considerable attention that researchers have devoted to this topic, it is debatable whether we have attained genuine normative implications as to how top managers in the MNC should make decisions about the foreign business operations of their companies. While we know a lot about the contingencies that are relevant to a given foreign operation mode (FOM) decision in a given country at a given point in time, the relevance of this knowledge may be compromised by two generally overlooked “meta-contingencies”: (1) the interdependencies between foreign operation mode decisions across countries and over time, and (2) the managerial capacity of the MNC to make these decisions in a way that takes these interdependencies into account. This has profound implications for the way in which MNCs should ideally make decisions about foreign operation modes. To draw out these implications explicitly we propose in this paper a systemic rather than a myopic view of foreign operation modes by modeling the foreign operation mode decisions of the firm as a corporate-level process. Our model builds on previous work by Buckley and Casson (1998) and Buckley and Hashai (2004), who have demonstrated how considering multiple countries in the same decision situation and allowing for multiple entry motives can enrich the analysis of foreign operation mode decisions. However, whereas their analyses were static and limited to three countries, we present a more general and dynamic framework that allows for an unlimited number of countries and time periods. The analysis leads to a view of various foreign operation modes as being elements of given foreign operation mode configurations of spatially and inter-temporally dispersed business activities. The structure of the paper is as follows. Section 2 describes the background for the paper and motivates the need for a new conceptualization. Section 3 then presents a descriptive model of foreign operation mode, suggests performance ramifications, and analyses a hypothetical numerical example. Section 4 sketches out an extension of the framework by allowing for changes over time in a given configuration, and uses numerical examples to discuss dynamic configuration. Finally, Section 5 concludes and draws implications for further research.

In this paper we have proposed a new conceptualization of foreign operation mode decisions, one that is more comprehensive than the traditional treatments found in international business literature. Our analysis suggests that to the extent that there are strong interdependencies—across national borders as well as over time—viewing each individual FOM decision (mi at t0) in isolation and deriving ceteris paribus predictions of that decision is prone to give limited predictive and explanatory power. In such cases, models that allow for these interdependencies could be a more useful starting point in the understanding of the complexities of internationalization. In fact, looking at a single FOM decision (one country, one specific point in time) without taking into account the context of that decision, is akin to implicitly assuming that managers are both discrete and myopic in their configuration approach. Furthermore, rather than taking the stance of transaction cost economics and related theories and simply assume that only efficient modes prevail (see e.g. Anderson & Gatignon, 1986), our framework presents different decision-making approaches available to managers and discusses their performance ramifications. By making the costs of each decision-making approach explicit and identifying the underlying sources of those costs, the typology has direct managerial implications. The framework also has implications for future foreign operation mode research. As a first step, additional insight should be obtained by designing empirical studies that aim to track actual FOM portfolios across countries and over time (Petersen, Benito, Welch, & Asmussen, 2008). With this data in hand, different characteristics of the firm's FOM portfolio, rather than the individual choice of a given firm in a given market, could be studied. For example, our one-shot model suggests that a firm's FOM diversity—i.e. country-by-country variation in FOMs—would be an interesting variable as it would say something about standardization and differentiation benefits which may overrule individual country-level contingencies, and hence add explanatory power over these contingencies. Also, according to our dynamic model, a firm's FOM fluctuations—i.e. its tendency to change over time—may contain information about perceived switching costs or learning effects. Having measured diversity and fluctuations of firms’ FOM portfolios, one could perform cluster analysis to classify firms according to which of our three configuration or re-configuration approaches they use. In other words, can a given firm's FOMs variations across time and space be considered large (discrete, myopic), small (rules-based, constant firms) or intermediate (perfect, dynamic)? Such a classification could be used to test the antecedents as well as the consequences (e.g. performance) of these approaches. Future foreign operation mode studies designed on the basis of the framework presented here may shed further light on such issues.