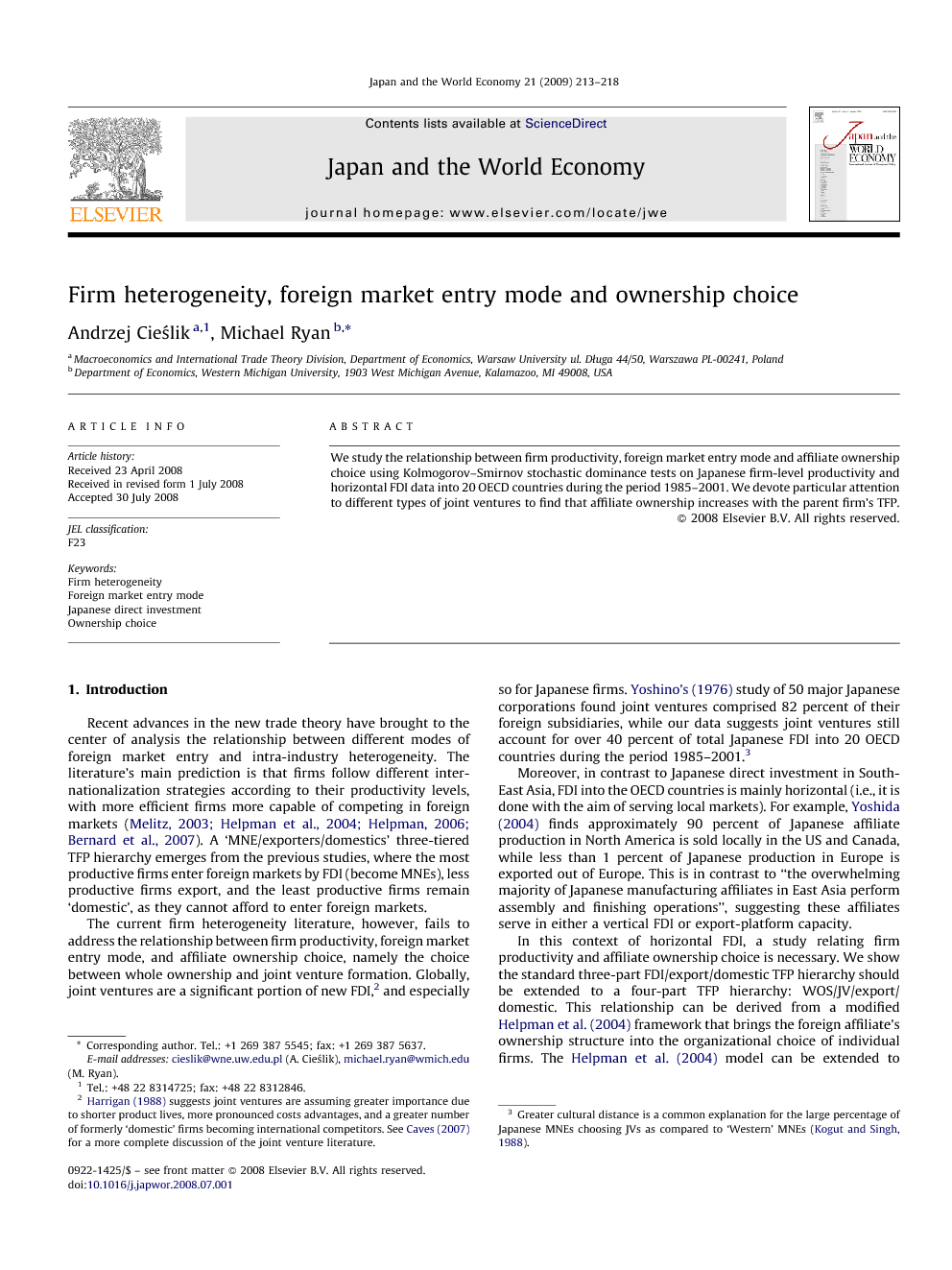 Recent advances in the new trade theory have brought to the center of analysis the relationship between different modes of foreign market entry and intra-industry heterogeneity. The literature's main prediction is that firms follow different internationalization strategies according to their productivity levels, with more efficient firms more capable of competing in foreign markets (Melitz, 2003, Helpman et al., 2004, Helpman, 2006 and Bernard et al., 2007). A ‘MNE/exporters/domestics’ three-tiered TFP hierarchy emerges from the previous studies, where the most productive firms enter foreign markets by FDI (become MNEs), less productive firms export, and the least productive firms remain ‘domestic’, as they cannot afford to enter foreign markets. The current firm heterogeneity literature, however, fails to address the relationship between firm productivity, foreign market entry mode, and affiliate ownership choice, namely the choice between whole ownership and joint venture formation. Globally, joint ventures are a significant portion of new FDI,2 and especially so for Japanese firms. Yoshino's (1976) study of 50 major Japanese corporations found joint ventures comprised 82 percent of their foreign subsidiaries, while our data suggests joint ventures still account for over 40 percent of total Japanese FDI into 20 OECD countries during the period 1985–2001.3 Moreover, in contrast to Japanese direct investment in South-East Asia, FDI into the OECD countries is mainly horizontal (i.e., it is done with the aim of serving local markets). For example, Yoshida (2004) finds approximately 90 percent of Japanese affiliate production in North America is sold locally in the US and Canada, while less than 1 percent of Japanese production in Europe is exported out of Europe. This is in contrast to “the overwhelming majority of Japanese manufacturing affiliates in East Asia perform assembly and finishing operations”, suggesting these affiliates serve in either a vertical FDI or export-platform capacity. In this context of horizontal FDI, a study relating firm productivity and affiliate ownership choice is necessary. We show the standard three-part FDI/export/domestic TFP hierarchy should be extended to a four-part TFP hierarchy: WOS/JV/export/domestic. This relationship can be derived from a modified Helpman et al. (2004) framework that brings the foreign affiliate's ownership structure into the organizational choice of individual firms. The Helpman et al. (2004) model can be extended to consider a wider set of internationalization strategies compared to the ones explicitly accounted for in their model.4 These strategies are characterized by the intermediate level of fixed costs compared to the strategies considered in Helpman et al. (2004). Hence, forming a joint venture with another firm or firms allows also less productive firms to enter international markets which would not otherwise be possible if the set of foreign market entry modes would be limited only to the wholly owned subsidiaries as in the case of Helpman et al. (2004) framework.5 Evidence on the TFP hierarchy for Japanese firms is still rather scarce. Head and Ries (2003), based on several direct and indirect measures (sales, value added, ‘Approximate’ TFP), found that Japanese domestic firms, exporters and MNEs exhibited the predicted productivity ranking only when sales data were used, with much weaker support when direct productivity measures were employed. More recently, Murakami's (2005) results contrast with Head and Ries (2003) and show exporter TFP to be higher than the TFP of firms that only serve foreign markets via FDI, although firms that do both have higher TFP than those that do just one of those activities. Kimura and Kiyota (2006) reproduce the standard three-level TFP hierarchy for Japanese firms with a slight twist, finding that firms that do both export and FDI are more productive than firms that just do one method of foreign market entry.6 The firm-level heterogeneity studies that examine the TFP-foreign market entry decision typically do not consider the ownership structure of the foreign affiliate. To the best of our knowledge, the only study that deals with the ownership issue is Raff et al. (2007) who demonstrated affiliate ownership shares increases with TFP. However, this study focuses only on firms investing abroad, ignoring the full range of productivity comparisons (i.e., domestic, exporters, MNEs). In addition, their empirical approach is based on regression analysis while our approach uses standard Kolmogorov–Smirnov (KS) stochastic dominance tests. We also differ with respect to the previous work on firm heterogeneity by focusing on horizontal FDI by limiting our focus to host-counties within the OECD. This contrasts with several studies using Japanese data (e.g., Murakami, 2005, Kimura and Kiyota, 2006 and Tomiura, 2007) that do not consider the FDI location when categorizing firm type.7 We also calculate a firm's productivity directly via the Levinsohn and Petrin (2003) productivity measure that relies on intermediate inputs such as materials to control for simultaneity issues. This contrasts with the use of ‘approximate’ productivity measures (e.g., Head and Ries, 2003 and Tomiura, 2007), as well as with Murakami (2005) and Kimura and Kiyota (2006) who calculate a firm's TFP relative to a representative firm within the same industry.

The introduction of firm heterogeneity into the new trade theory literature opened a wide array of new research opportunities, including the link between TFP and affiliate ownership choice. Our empirical results for Japanese firms suggest that the existing three-tiered TFP hierarchy: FDI/exporters/domestics, should be replaced with the more general WOS/JV/exporters/domestics hierarchy. The split of joint ventures into particular categories (majority-, equal share- and minority-owned) suggests that our hierarchical results are mostly driven by the majority-owned joint ventures. These empirical results deserve a closer theoretical attention and hopefully will lead to the revision of existing theoretical models that generate only the three-tiered TFP hierarchy by including the affiliate ownership choice into the center of analysis.