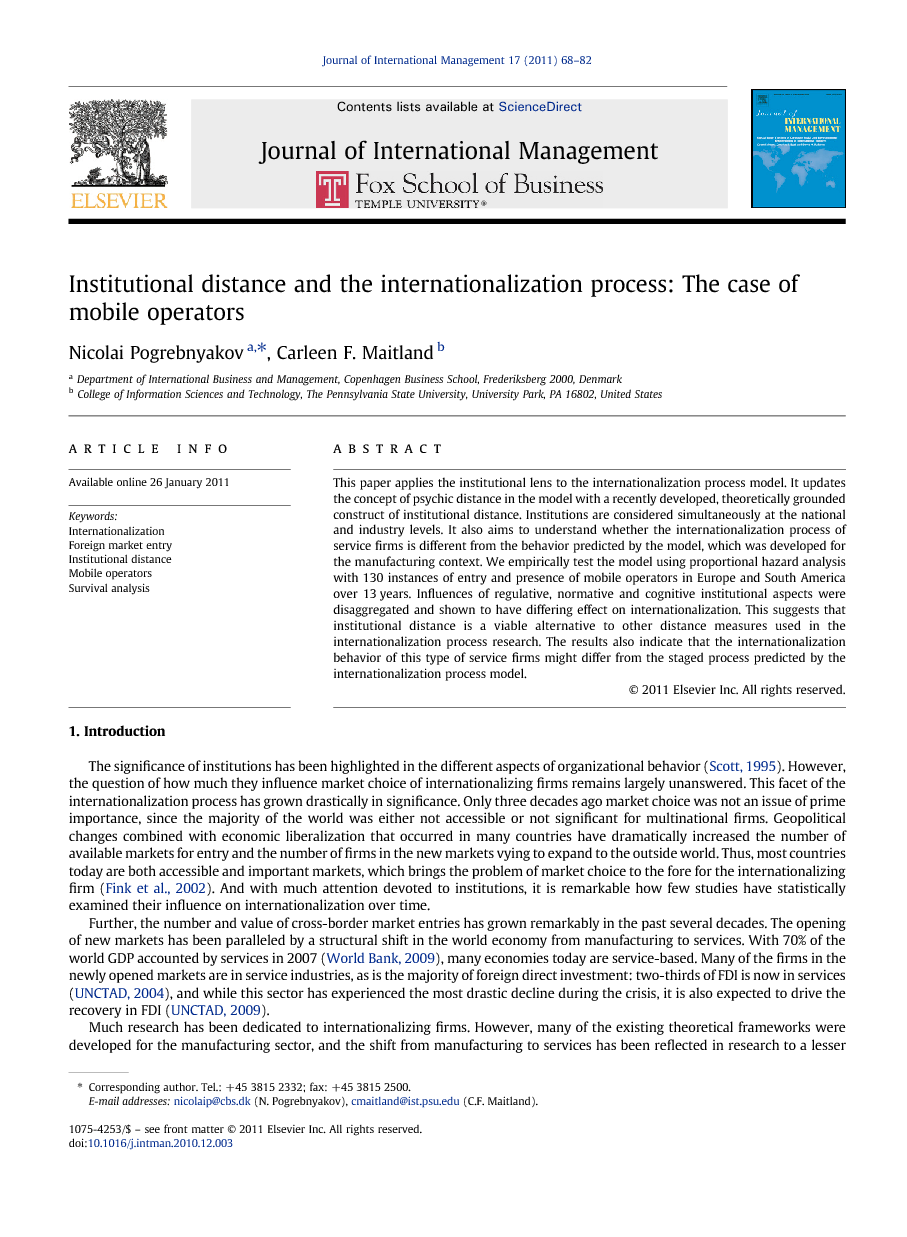 The significance of institutions has been highlighted in the different aspects of organizational behavior (Scott, 1995). However, the question of how much they influence market choice of internationalizing firms remains largely unanswered. This facet of the internationalization process has grown drastically in significance. Only three decades ago market choice was not an issue of prime importance, since the majority of the world was either not accessible or not significant for multinational firms. Geopolitical changes combined with economic liberalization that occurred in many countries have dramatically increased the number of available markets for entry and the number of firms in the new markets vying to expand to the outside world. Thus, most countries today are both accessible and important markets, which brings the problem of market choice to the fore for the internationalizing firm (Fink et al., 2002). And with much attention devoted to institutions, it is remarkable how few studies have statistically examined their influence on internationalization over time. Further, the number and value of cross-border market entries has grown remarkably in the past several decades. The opening of new markets has been paralleled by a structural shift in the world economy from manufacturing to services. With 70% of the world GDP accounted by services in 2007 (World Bank, 2009), many economies today are service-based. Many of the firms in the newly opened markets are in service industries, as is the majority of foreign direct investment: two-thirds of FDI is now in services (UNCTAD, 2004), and while this sector has experienced the most drastic decline during the crisis, it is also expected to drive the recovery in FDI (UNCTAD, 2009). Much research has been dedicated to internationalizing firms. However, many of the existing theoretical frameworks were developed for the manufacturing sector, and the shift from manufacturing to services has been reflected in research to a lesser extent (Coviello and Martin, 1999 and Goerzen and Makino, 2007). At the same time, new understandings of the dynamics of organizational behavior have been proposed. One of such recent advances is the recognition of the role of institutions. The institutional perspective allows better understanding of how cultural beliefs, norms as well as formal rules influence the operation of organizations (Gooderham et al., 1999). The mutual influences of institutions and organizations on one another have been systematically investigated (DiMaggio and Powell, 1983). Furthermore, the separation of institutions into different levels, including world, societal, organizational and individual, have led to a recognition of the differing influences of institutions at each of these levels on organizations and other types of actors (Scott, 1995). This paper has three objectives. First, it integrates the recently developed construct of institutional distance with insights from the internationalization process model. That construct has origins in institutional theory, which has been applied to many aspects of organizational behavior. Whether institutional distance affects behavior of internationalizing firms is as yet unclear. Second, it contributes to statistical studies of internationalization research. Qualitative methodology in this domain allows to gain insight of motives or decision-making processes involved in internationalization. By contrast, quantitative examinations allows understanding of the “big picture” and observe larger-scale patterns of internationalization. However, statistical studies have been somewhat underrepresented in favor of qualitative studies (Barkema et al., 1996), and this paper is an attempt to bridge that gap. Finally, it aims to enhance our understanding of internationalization of service firms. Its theoretical foundation is the internationalization process model, which was developed for the manufacturing sector and applied to services with mixed results. In particular, it asks whether firms in the mobile telecommunications industry, with its end product that has global appeal and little cross-country variation, are subject to learning experience when entering foreign markets as predicted by the model. This objective is timely and important because it addresses calls for thorough research of internationalization of service firms, of which there have been few studies (Cicic et al., 1999). To address these objectives, we construct a Cox proportional hazards regression model using data on 130 instances of foreign entry and presence of mobile operators in 36 countries of Europe and South America over 13 years. The study is set in the context of the mobile telecommunications industry. Mobile services have diffused across the globe faster than any previous technology (World Bank, 2008). Mobile telephony was used by over 60% of the world's population in 2008, up from a quarter five years before, and is projected to grow strongly despite the recent economic turmoil (International Telecommunications Union, 2009). However, while the use of mobile services is generally widespread, significant differences in demand and supply exist. On the demand side, countries vary in their levels of adoption (e.g., 50% in Moldova compared with 94% in France in 2008) and patterns of use (e.g., text messaging was until recently more widely used in Europe than in the United States). On the supply side, mobile operators are often national firms with investments from or in competition with foreign firms from a variety of countries. For example, in the U.S., Verizon Wireless, a domestic firm, is in fact a joint venture with the British firm Vodafone and competes against the German firm T-Mobile. The paper is structured as follows. Section 2 reviews theoretical foundations, including the internationalization process model and institutional theory. Section 3 brings together these theoretical foundations and develops hypotheses. This is followed in Section 4 by the description of the methodology, data collection process and descriptive statistics of the data. Section 5 presents results, followed by a discussion in Section 6. Section 7 concludes the paper.

There are three ways in which this research contributes to theory. First, it updates the internationalization process model with institutional distance. Bringing institutions into internationalization research allows differentiating between regulative, normative and cognitive-cultural environmental influences. Second, we draw further attention of internationalization scholars to the multi-level, complex environment in which internationalization firms operate. We do so by considering institutional distance at both national and industry-specific levels. Third, it suggests that the construct of learning in internationalization process model applies to service firms. However, the learning process primarily applies to entries into increasingly distant markets and does not include stages of commitment to existing markets. Our study also uses statistical analysis, which complements qualitative methodology that has been used in the majority of internationalization research. From the practical perspective, the findings may be useful to managers. They outline factors that might be considered in strategies of companies that are expanding into often unfamiliar foreign countries. In particular, it draws attention of mobile operators to industry-specific regulations, suggesting that they have a greater influence on internationalization than general country regulations. This research also calls for a careful evaluation and critical assessment of assumptions built into international strategies of operators. Realizing the extent of such assumptions and potentially going against established internationalization patterns in the industry may bring about competitive advantages for the company. This research may also help in the development and enhancement of FDI strategies by policymakers at the national and regional levels. The results highlight factors that influence internationalization, which can be used in development or adjustment of specific policies. For example, given that previous experience in the region influences operators, particularly when they begin to expand in this region, policymakers may pay particular attention to operators coming from outside of the region, assisting them with advice and otherwise facilitating adjustment to the unfamiliar environment. Future research in this area may further probe into the influence of institutional distance at different level by considering, e.g., regional or intra-organizational pressures. Furthermore, the results presented here may be enhanced through examinations of the relationship between firm performance and learning in the internationalization process. This study also highlights a need to develop a typology of service industries that can be used in subsequent studies of internationalization. Such typology would greatly benefit the analysis of internationalization behavior, given the importance and sheer size of services in the world economy.