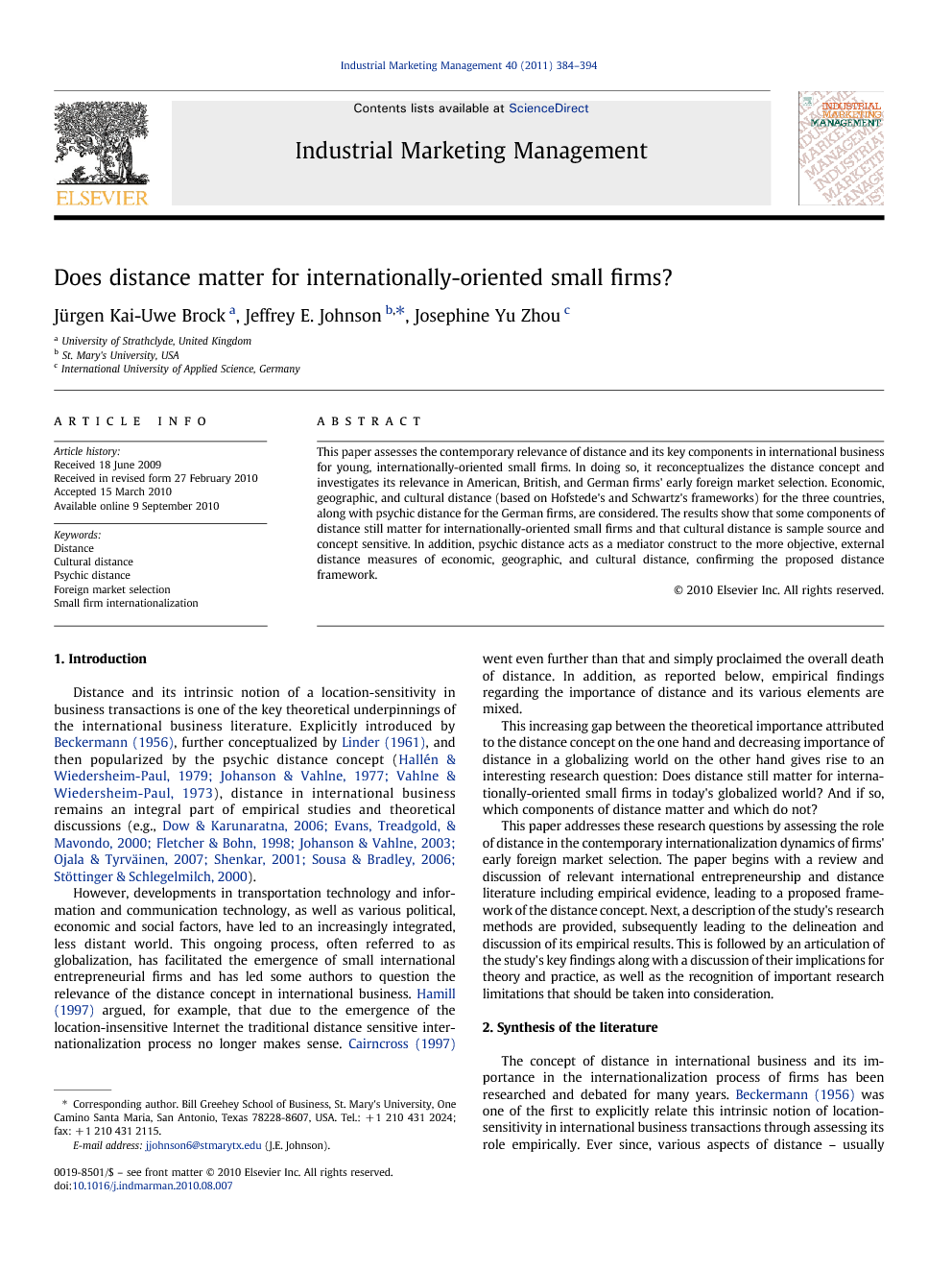 This paper assesses the contemporary relevance of distance and its key components in international business for young, internationally-oriented small firms. In doing so, it reconceptualizes the distance concept and investigates its relevance in American, British, and German firms' early foreign market selection. Economic, geographic, and cultural distance (based on Hofstede's and Schwartz's frameworks) for the three countries, along with psychic distance for the German firms, are considered. The results show that some components of distance still matter for internationally-oriented small firms and that cultural distance is sample source and concept sensitive. In addition, psychic distance acts as a mediator construct to the more objective, external distance measures of economic, geographic, and cultural distance, confirming the proposed distance framework.

Distance and its intrinsic notion of a location-sensitivity in business transactions is one of the key theoretical underpinnings of the international business literature. Explicitly introduced by Beckermann (1956), further conceptualized by Linder (1961), and then popularized by the psychic distance concept (Hallén and Wiedersheim-Paul, 1979, Johanson and Vahlne, 1977 and Vahlne and Wiedersheim-Paul, 1973), distance in international business remains an integral part of empirical studies and theoretical discussions (e.g., Dow and Karunaratna, 2006, Evans et al., 2000, Fletcher and Bohn, 1998, Johanson and Vahlne, 2003, Ojala and Tyrväinen, 2007, Shenkar, 2001, Sousa and Bradley, 2006 and Stöttinger and Schlegelmilch, 2000). However, developments in transportation technology and information and communication technology, as well as various political, economic and social factors, have led to an increasingly integrated, less distant world. This ongoing process, often referred to as globalization, has facilitated the emergence of small international entrepreneurial firms and has led some authors to question the relevance of the distance concept in international business. Hamill (1997) argued, for example, that due to the emergence of the location-insensitive Internet the traditional distance sensitive internationalization process no longer makes sense. Cairncross (1997) went even further than that and simply proclaimed the overall death of distance. In addition, as reported below, empirical findings regarding the importance of distance and its various elements are mixed. This increasing gap between the theoretical importance attributed to the distance concept on the one hand and decreasing importance of distance in a globalizing world on the other hand gives rise to an interesting research question: Does distance still matter for internationally-oriented small firms in today's globalized world? And if so, which components of distance matter and which do not? This paper addresses these research questions by assessing the role of distance in the contemporary internationalization dynamics of firms' early foreign market selection. The paper begins with a review and discussion of relevant international entrepreneurship and distance literature including empirical evidence, leading to a proposed framework of the distance concept. Next, a description of the study's research methods are provided, subsequently leading to the delineation and discussion of its empirical results. This is followed by an articulation of the study's key findings along with a discussion of their implications for theory and practice, as well as the recognition of important research limitations that should be taken into consideration.

Ghemawat (2001) argues that distance still matters, positing that evaluations of cultural, political, geographic and economic distance and their inherent barriers and emanating costs and risks are critical for effectual foreign market selection decisions. This study supports Ghemawat's central position by finding that distance does indeed matter with regard to a firm's early foreign market selection process, and more specifically, with internationally-oriented small firms. Our findings confirm the importance of distance, particularly the dimension of economic distance encompassing the aspect of market size, as an explanatory mechanism for early foreign market selection. Luostarinen (1980) found more than twenty years ago that business distance, as measured by economic, cultural and geographic distance, provided an explanation for the initial foreign market decision-making behavior of Finnish firms. Our study, which was similarly structured utilizing a multidimensional conceptualization and examination of business distance not only supports Luostarinen's findings but clearly suggests that business distance still matters even in today's global business environment. One of the foremost contributions of our study is the contemporary validation of the significance of business distance as an explanatory tool for internationally-oriented small firms' early foreign market selection processes through a multi-country investigation of leading industrial nations spanning two continents. Another key contribution lies in our juxtaposition of the Hofstede and Schwartz frameworks in determining the present-day relevance of distance with regard to firms' early foreign market selection. A final noteworthy contribution is the paper's reconceptualized framework of the distance concept, along with its finding that internal or psychic distance acts as a mediator construct to external distance regarding country choice, thereby confirming our proposed framework. The study's findings have important implications for theory. They are tantamount to a present-day validation of earlier business distance paradigms and models (e.g., Beckermann, 1956, Linder, 1961 and Vahlne and Wiedersheim-Paul, 1973) and point to their continuing relevance in spite of today's global business realities and major advances in ICT and transportation technology. However, our work highlights the need for updating and expanding Hofstede, 1980 and Schwartz, 1997 indices to account for more recent cultural variations. The study's findings also have important implications for practitioners. The findings suggest that it would be prudent for firms to incorporate an analysis of various distance dimensions into their international market selection process. The study provides clear evidence of a link between distance variables and the early foreign market selection decisions of firms. While economic and geographic distance are likely considered by most firms, it is less certain that the impact of cultural distance is examined and incorporated into international expansion decisions and strategy, thereby exacerbating risks and potentially imperiling their ultimate success in their chosen country market. A holistic analysis is particularly crucial in later stages of firms' internationalization, when they deepen their entry modes and cultural distance becomes more influential (e.g., Fletcher & Bohn, 1998). As with any research project, this study has important limitations which need to be articulated and considered. The first limitation concerns the somewhat different characteristics of the firms in the three country samples. While we acknowledge that these intrinsic differences and the heterogeneity of the samples are cause for concern, we have statistically demonstrated that the organizational characteristics of the sampled firms are practically not – in terms of effect sizes – impacted by the direction of internationalization, thereby ensuring validity. Nevertheless, future studies should take stringent measures to ensure better sample homogeneity in order to facilitate sample comparison and enhance the validity of the findings. Moreover, future studies should investigate firms in sectors other than high technology so as to examine the validity of the findings in industries where firms produce consumer products as opposed to industrial goods, the latter of which could be argued to be less culturally sensitive. A second limitation of the study is that due to resource constraints it encompassed psychic distance analysis of only the German sample. This impacts the testing of our proposed distance framework since only the external distance component can be compared across the three country samples. Future studies should more explicitly investigate internal distance in the modern business world, both qualitatively and quantitatively, examining the perceptions of key decision-makers in firms. A third limitation relates to the implicit perspective mix used. While the distance dimensions used a country-level perspective, the market entry data of the sample used firm-level data. For a firm its target market matters, not the overall size of the country market. Future research should avoid this perspective mix and conceptualize external distance dimensions closer to the business realities of the firm. In addition to the aforementioned limitations of the study and suggested areas for future research we would also encourage researchers to examine external and internal distance dynamics in emerging nations and in other regions of the world (i.e., non-triad) in order to assess the wider generalizability of the findings. Finally, longitudinal studies might shed further light on emerging trends related to business distance.