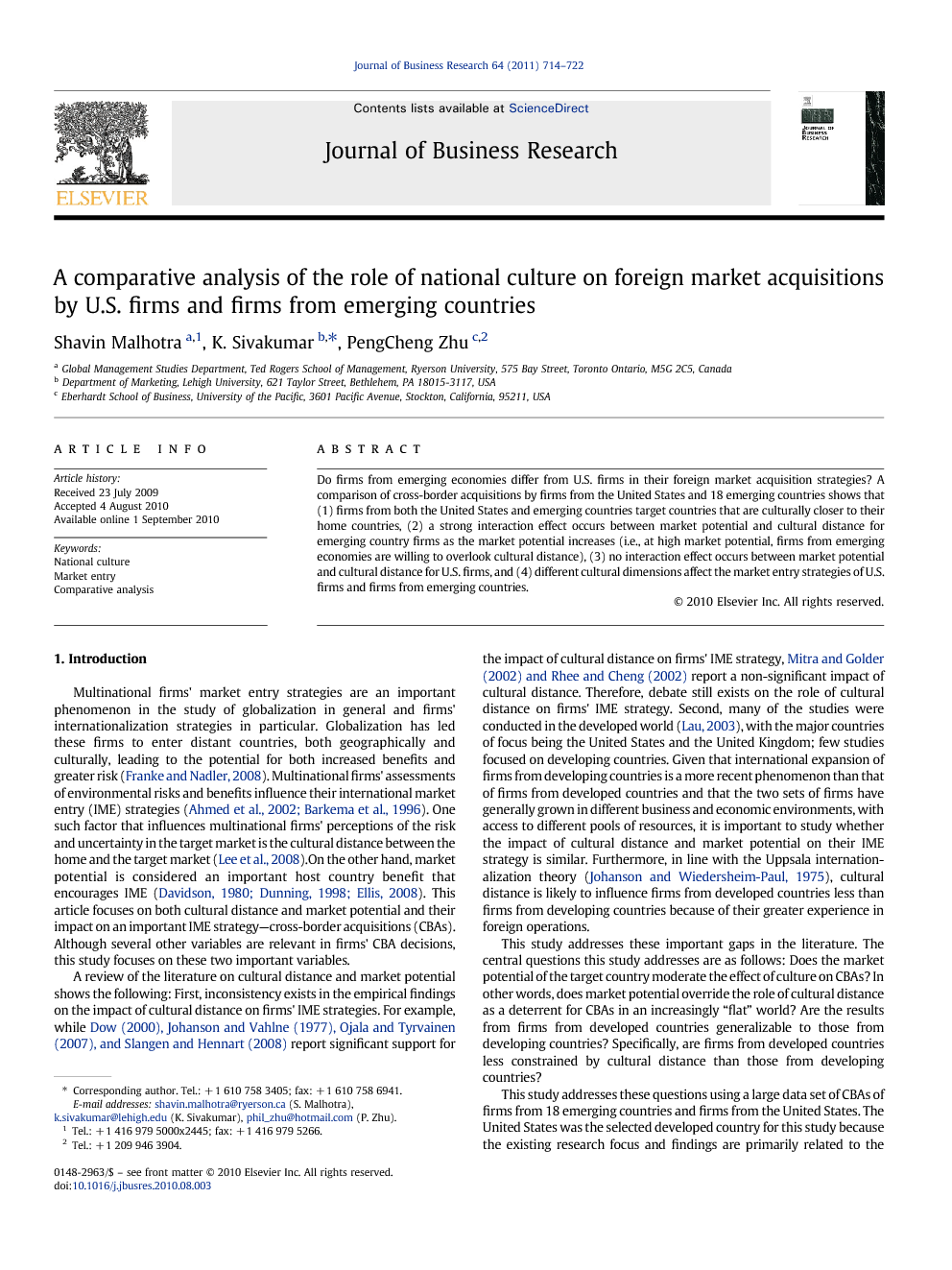 The research results provide several implications for managers of global companies and academic researchers interested in global issues. Although managers and researchers consider culture an important determinant (and sometimes deterrent) of IME strategies, the findings establish some important boundary conditions. That is, although culture plays a role in determining market entry strategies of both U.S. firms and those from emerging countries, the moderating role of market potential on culture is different for these two types of firms. This finding has implication for IME strategies; perhaps U.S. firms are justified in considering culture a dominant factor in market entry strategies. However, that strategy may not be optimal for firms from emerging countries; rather, they should carefully consider the market potential of the target markets before making decisions. Thus, the broader managerial conclusion is that the relative importance of variables in market entry strategies is not the same for firms from different markets, and a more comprehensive analysis and results must augment the U.S.-centric findings that drive most thinking in this domain. The findings also suggest that when U.S. managers decide which markets to enter, they seem to be more constrained by cultural distance than firms from emerging markets—the negative influence of cultural distance on CBAs is significantly more for U.S. firms than for firms from emerging markets. Support does not exist for the Uppsala international theory; thus, the findings challenge the widely held notion that as firms gain international experience, they are likely to enter markets with larger cultural distance. Given this notion, it would be expected that the U.S. firms, which had many years of international experience, would be more likely to target more culturally distant countries, especially when the market size of the target countries is large. In contrast, firms from emerging countries would be expected to be more wary of culturally distant countries. The findings run counter to this notion. They show that (1) fundamental differences may exist in the internationalization behavior of these two sets of firms and (2) further research may need to re-examine the existing notion on the impact of cultural distance on international strategy. In addition, to explore the role of culture more fully, further research that examines market entry behavior should focus on the behavior of firms from many countries rather than the behavior of only U.S. firms. The analysis on individual cultural dimensions offers several other significant insights. Although culture is a major determinant of IME strategies, the specific culture factors are different for U.S. firms and those in emerging countries. Thus, when firms are conceptualizing research questions or deciding on market entry strategies, viewing cultural distance as one entity will result in suboptimal research approaches and managerial decisions. Rather, a fine-tuned approach that considers individual culture factors is necessary, as is a focus on the different cultural factors when dealing with firms from different countries. Taken together, the overall model results demonstrate some important findings. First, although the analysis of U.S. firms and those from the emerging countries included the same variables, the model fit statistics are significantly better for the U.S. firms than for the emerging country firms. This result provides several interesting possibilities for further research. The conventional variables included in the analysis of U.S. firms may be less adequate when studying emerging countries, and other variables must be examined that highlight the notion that firms from different economies may need different approaches and that U.S.-centric approaches may need to be modified. Second, if culture cannot adequately explain the internationalization phenomenon, should different cultural variables or measures be examined? Are Hofstede's (1980) measures equally applicable across the board when analyzing market entry behavior? Third, although culture has a significant influence in both samples, different culture factors are significant in different samples. This raises an important question: Should combined distance measures for culture be re-examined? In addition, can the insignificant or even significant results offer different insights if the culture factors are individually analyzed? These questions highlight the larger issue of generalizability of global research when it is based only on U.S. firms' globalization behavior. Note that the results represent the general impact of cultural distance on the 18 emerging countries. While this makes the results more generalizable to the larger population of emerging countries, it is possible that within this sample, cultural distance may be more important for some countries than others. Therefore, further research should treat these results with caution when using them in a context of an individual emerging country. Fine-tuned segmentation analysis will offer further insights into the CBA strategies of different countries or country groups. The research question that should be addressed at the next level is the performance of the CBAs from different countries. What factors govern the performance of CBAs over time? Do differences exist in the factors influencing the performance as well as the pattern of performance of CBAs from different countries? In summary, the establishment, performance, and consequences of CBAs are important and vibrant avenues for further research, and this research is one important step in this larger domain.