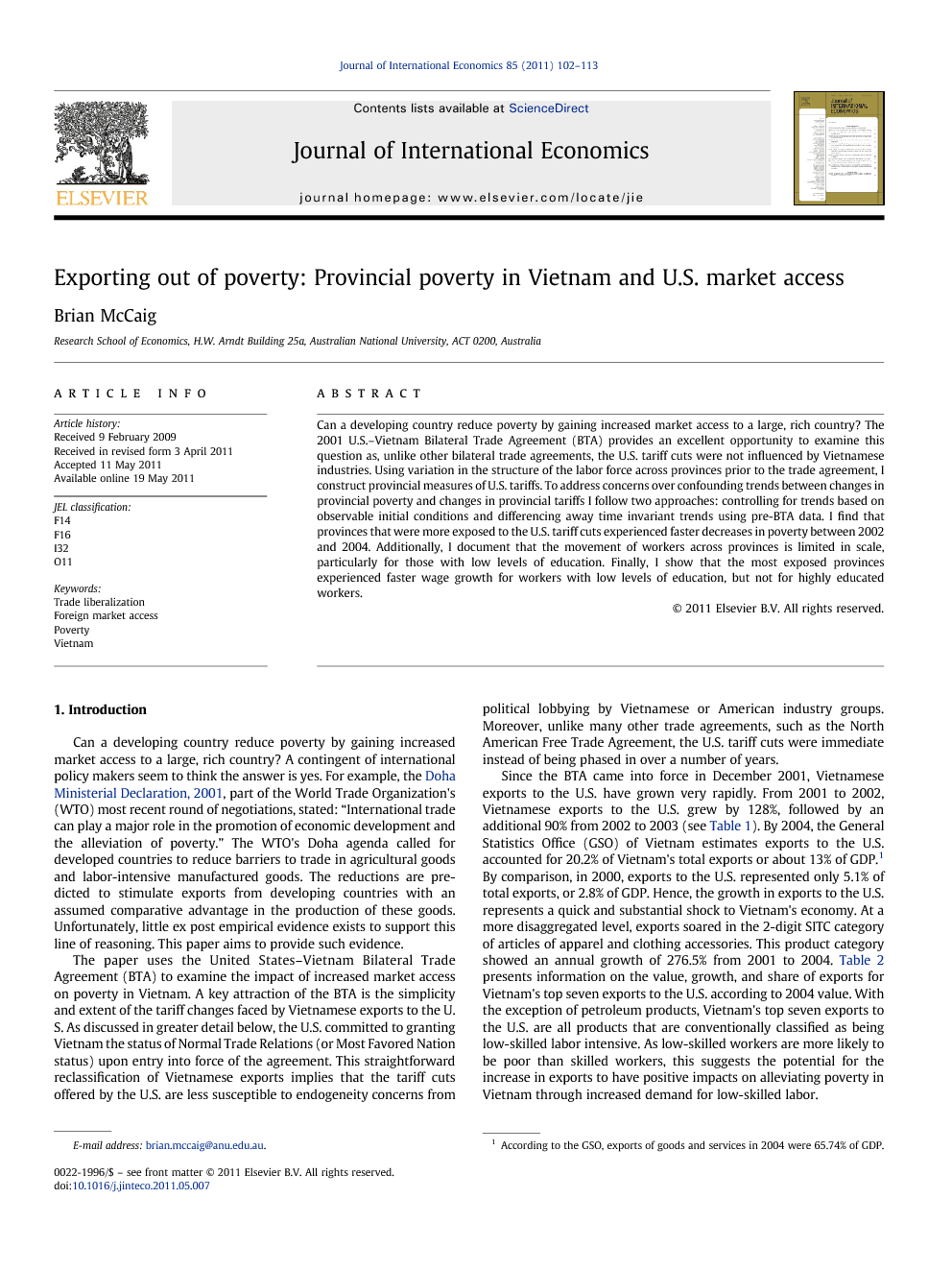 Can a developing country reduce poverty by gaining increased market access to a large, rich country? The 2001 U.S.–Vietnam Bilateral Trade Agreement (BTA) provides an excellent opportunity to examine this question as, unlike other bilateral trade agreements, the U.S. tariff cuts were not influenced by Vietnamese industries. Using variation in the structure of the labor force across provinces prior to the trade agreement, I construct provincial measures of U.S. tariffs. To address concerns over confounding trends between changes in provincial poverty and changes in provincial tariffs I follow two approaches: controlling for trends based on observable initial conditions and differencing away time invariant trends using pre-BTA data. I find that provinces that were more exposed to the U.S. tariff cuts experienced faster decreases in poverty between 2002 and 2004. Additionally, I document that the movement of workers across provinces is limited in scale, particularly for those with low levels of education. Finally, I show that the most exposed provinces experienced faster wage growth for workers with low levels of education, but not for highly educated workers.

Can a developing country reduce poverty by gaining increased market access to a large, rich country? A contingent of international policy makers seem to think the answer is yes. For example, the Doha Ministerial Declaration, 2001, part of the World Trade Organization's (WTO) most recent round of negotiations, stated: “International trade can play a major role in the promotion of economic development and the alleviation of poverty.” The WTO's Doha agenda called for developed countries to reduce barriers to trade in agricultural goods and labor-intensive manufactured goods. The reductions are predicted to stimulate exports from developing countries with an assumed comparative advantage in the production of these goods. Unfortunately, little ex post empirical evidence exists to support this line of reasoning. This paper aims to provide such evidence. The paper uses the United States–Vietnam Bilateral Trade Agreement (BTA) to examine the impact of increased market access on poverty in Vietnam. A key attraction of the BTA is the simplicity and extent of the tariff changes faced by Vietnamese exports to the U.S. As discussed in greater detail below, the U.S. committed to granting Vietnam the status of Normal Trade Relations (or Most Favored Nation status) upon entry into force of the agreement. This straightforward reclassification of Vietnamese exports implies that the tariff cuts offered by the U.S. are less susceptible to endogeneity concerns from political lobbying by Vietnamese or American industry groups. Moreover, unlike many other trade agreements, such as the North American Free Trade Agreement, the U.S. tariff cuts were immediate instead of being phased in over a number of years. Since the BTA came into force in December 2001, Vietnamese exports to the U.S. have grown very rapidly. From 2001 to 2002, Vietnamese exports to the U.S. grew by 128%, followed by an additional 90% from 2002 to 2003 (see Table 1). By 2004, the General Statistics Office (GSO) of Vietnam estimates exports to the U.S. accounted for 20.2% of Vietnam's total exports or about 13% of GDP.1 By comparison, in 2000, exports to the U.S. represented only 5.1% of total exports, or 2.8% of GDP. Hence, the growth in exports to the U.S. represents a quick and substantial shock to Vietnam's economy. At a more disaggregated level, exports soared in the 2-digit SITC category of articles of apparel and clothing accessories. This product category showed an annual growth of 276.5% from 2001 to 2004. Table 2 presents information on the value, growth, and share of exports for Vietnam's top seven exports to the U.S. according to 2004 value. With the exception of petroleum products, Vietnam's top seven exports to the U.S. are all products that are conventionally classified as being low-skilled labor intensive. As low-skilled workers are more likely to be poor than skilled workers, this suggests the potential for the increase in exports to have positive impacts on alleviating poverty in Vietnam through increased demand for low-skilled labor. Following the entry into force of the BTA, the incidence of poverty in Vietnam declined dramatically. Between 2002 and 2004 the national poverty rate fell from 28.9 to 19.5%.2 While there is clearly a coincident trend in poverty alleviation and U.S. market access, it remains an empirical question whether there is a causal connection running from the cut in U.S. tariffs to the fall in poverty. In this paper I measure the short-run impacts of U.S. tariff cuts on provincial poverty in Vietnam using variation across provinces. Following Topalova (2010), I construct provincial measures of U.S. industry tariffs by weighting the tariffs by the pre-existing share of employment by industry within each province. I find that provinces that were more heavily exposed to the tariff cuts (i.e., prior to the BTA had a greater share of workers in industries with large tariff cuts) experienced more rapid decreases in poverty. The impact on provincial poverty rates between 2002 and 2004 is large. The effect is robust to underlying trends based on observable differences in initial conditions and to time invariant trends. I find that overall migration rates are low, on the order of 1 or 2% of the population, and that migration flows are positively related to the drop in provincial tariffs. However, workers with low levels of education are less responsive to cross-province differentials, which may be one of the reasons for the differential impact of the BTA on provincial poverty. Finally, consistent with the reductions in poverty and low levels of migration, I find that wages grew more quickly for the least educated workers in the most exposed provinces, but that there is little effect on the wages of the most educated workers. The paper proceeds by first providing a brief overview of the literature on trade and poverty and a discussion of the impact of changes in foreign market access on labor demand. Next, the BTA is discussed in detail, followed by an overview of the data and empirical methodology used in the paper. Subsequently, regression results are reported and discussed, before concluding remarks are presented.

In this paper, I estimate the poverty impacts of a large, developed country lowering import barriers to goods from a small, developing country. Specifically, I examine the effect of the U.S.–Vietnam Bilateral Trade Agreement (BTA), which came into force in December 2001, on changes in poverty across provinces in Vietnam between 2002 and 2004. I estimate provincial tariffs based on weighting industry tariffs with the share of workers within a province that worked in that industry prior to the BTA. As such, although the changes in U.S. tariffs are arguably exogenous, the weighting of industry tariffs by pre-BTA employment shares introduces the possibility of confounding trends in a regression of changes in poverty on changes in provincial tariffs. As is common in the literature, I attempt to mitigate the problem of confounding trends by including controls for initial conditions, such as aggregate employment shares. Additionally, I use data from a period before the BTA to difference away time invariant trends. Both procedures lead to a similar conclusion: provinces that experienced the greatest reduction in U.S. tariffs experienced faster reductions in poverty. Turning to labor market conditions, I document that worker migration between provinces is not large, either before or after the BTA. Additionally, unskilled workers are less likely to move across provinces than skilled workers. Finally, provinces that experienced larger drops in U.S. tariffs experienced greater inflows of migrants, but the relationship is weaker for unskilled workers than for skilled workers. The low levels of inter-provincial migration, especially of unskilled workers, help to explain why some provinces benefited more than others in the period immediately following the implementation of the BTA. Finally, I document that wage growth for unskilled workers was more rapid in the provinces most exposed to the U.S. tariff cuts. Wage growth for skilled workers is negligibly related to changes in provincial tariffs. This pattern is consistent with the positive shock to the demand for unskilled labor that the BTA created. One limitation of the paper is its inability to address the overall impact of the BTA as the econometric framework is based on differential responses across provinces. Nonetheless, this is the first paper, to the author's knowledge, that provides a direct examination of increased foreign market access on poverty in a developing country. Moreover, like Topalova, 2010 and Kovak, 2010, it demonstrates the importance of sub-national variation in the response to trade shocks. This too is largely overlooked in the existing literature which mostly focuses on variation across industries. The paper focuses exclusively on the short-run impacts of a reduction in foreign tariffs for exports from a developing country. It takes advantage of a unique trade shock created by the 2001 BTA which led to an immediate decrease in U.S. tariffs on virtually all imports from Vietnam. While the U.S. tariff cuts are shown to have led to greater decreases in poverty in more exposed provinces, this is not necessarily the net impact of the trade agreement, as many of Vietnam's commitments were not implemented within the period of study. Indeed, most of these were not scheduled to be completed until three or four years after the agreement came into force and some have ten years before they are required to be implemented. As such, the impact of Vietnam's BTA commitments on poverty and other outcomes of interest remains an outstanding question.