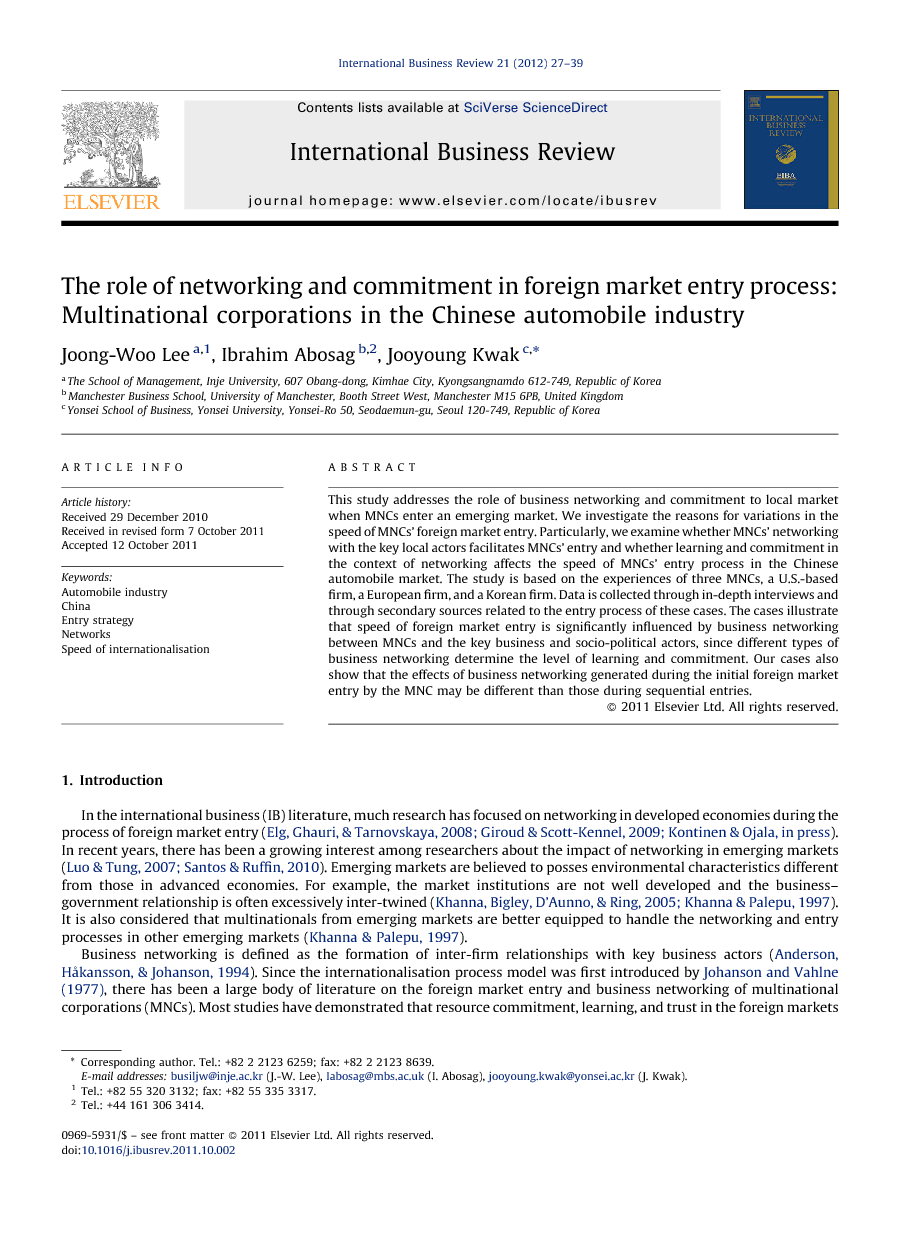 In the international business (IB) literature, much research has focused on networking in developed economies during the process of foreign market entry (Elg et al., 2008, Giroud and Scott-Kennel, 2009 and Kontinen and Ojala, in press). In recent years, there has been a growing interest among researchers about the impact of networking in emerging markets (Luo and Tung, 2007 and Santos and Ruffin, 2010). Emerging markets are believed to posses environmental characteristics different from those in advanced economies. For example, the market institutions are not well developed and the business–government relationship is often excessively inter-twined (Khanna et al., 2005 and Khanna and Palepu, 1997). It is also considered that multinationals from emerging markets are better equipped to handle the networking and entry processes in other emerging markets (Khanna & Palepu, 1997). Business networking is defined as the formation of inter-firm relationships with key business actors (Anderson, Håkansson, & Johanson, 1994). Since the internationalisation process model was first introduced by Johanson and Vahlne (1977), there has been a large body of literature on the foreign market entry and business networking of multinational corporations (MNCs). Most studies have demonstrated that resource commitment, learning, and trust in the foreign markets are facilitated by the development of relationships with local business actors, helping MNCs land successfully in the host markets (Lopez-Duarte and Vidal-Suarez, 2010 and Zaheer, 1995). Nevertheless, it still remains unclear how networking with local actors influences the speed of foreign market entry, if the speed of foreign market entry is regarded as the duration from the initial contact to the start of business operations in the host market. Previous studies (Ghauri et al., 2008 and Hadjikhani et al., 2008) have argued that the socio-political context may be one of the answers that explain the variations in the speed of MNCs’ entry processes into foreign markets. While the entry success of MNCs may be reasonably thought to be dependent upon the business itself and other contexts (Lee & Hadjikhani, 2005), the existing studies in business networking and relationships have rarely paid attention to the MNCs’ speed of foreign market entry under specific socio-political environments, such as the case with the Chinese automobile industry where the local partners are often the host government. Therefore, this paper addresses a fundamental question in the area of IB research: why are there variations in the speed of MNCs’ market entry into emerging markets and whether it is influenced by networking activities/capabilities of multinationals or not? The characteristics of the relationships between MNCs and their partners, suppliers, and socio-political organisations tend to determine MNCs’ relative market position (Ghauri and Holstius, 1996 and Welch and Wilkinson, 2004). At the same time, since those relationships have both a static and dynamic nature, they evolve over time. In this process, the sustenance of good networking in an international market eventually hinges upon elements such as learning and resource commitments (Hadjikhani et al., 2008 and Isobe et al., 2000). However, MNCs’ learning and commitment, interlocked with their self-interests, sometimes may become misunderstood by a host government or raise tension with headquarters. In this paper, we propose that MNCs’ networking with the key local actors facilitates foreign market entry and that learning and commitment in the context of networking affects foreign market entry. This research contributes to further understanding the link between the speed of internationalisation processes and networking in two significant ways. First, the research presented here serves as a fair answer to the question that why some MNCs are able to enter foreign markets more quickly and less problematically. Second, it presents a good reference to suggest whether MNCs coming from similar environmental and institutional settings (emerging market firms entering other emerging markets) are in a better position to achieve this speed.