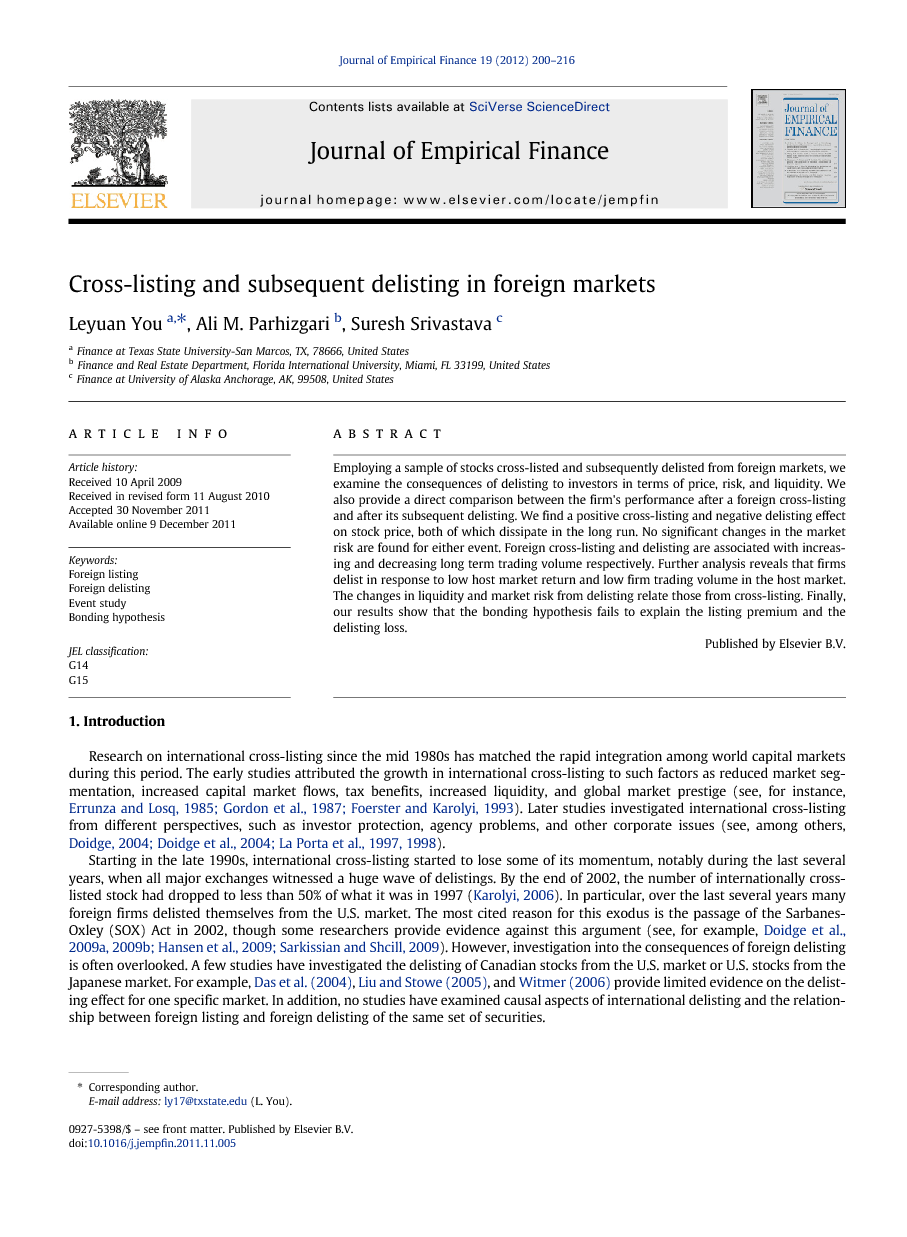 Employing a sample of stocks cross-listed and subsequently delisted from foreign markets, we examine the consequences of delisting to investors in terms of price, risk, and liquidity. We also provide a direct comparison between the firm's performance after a foreign cross-listing and after its subsequent delisting. We find a positive cross-listing and negative delisting effect on stock price, both of which dissipate in the long run. No significant changes in the market risk are found for either event. Foreign cross-listing and delisting are associated with increasing and decreasing long term trading volume respectively. Further analysis reveals that firms delist in response to low host market return and low firm trading volume in the host market. The changes in liquidity and market risk from delisting relate those from cross-listing. Finally, our results show that the bonding hypothesis fails to explain the listing premium and the delisting loss.

Research on international cross-listing since the mid 1980s has matched the rapid integration among world capital markets during this period. The early studies attributed the growth in international cross-listing to such factors as reduced market segmentation, increased capital market flows, tax benefits, increased liquidity, and global market prestige (see, for instance, Errunza and Losq, 1985, Gordon et al., 1987 and Foerster and Karolyi, 1993). Later studies investigated international cross-listing from different perspectives, such as investor protection, agency problems, and other corporate issues (see, among others, Doidge, 2004, Doidge et al., 2004, La Porta et al., 1997 and La Porta et al., 1998). Starting in the late 1990s, international cross-listing started to lose some of its momentum, notably during the last several years, when all major exchanges witnessed a huge wave of delistings. By the end of 2002, the number of internationally cross-listed stock had dropped to less than 50% of what it was in 1997 (Karolyi, 2006). In particular, over the last several years many foreign firms delisted themselves from the U.S. market. The most cited reason for this exodus is the passage of the Sarbanes-Oxley (SOX) Act in 2002, though some researchers provide evidence against this argument (see, for example, Doidge et al., 2009a, Doidge et al., 2009b, Hansen et al., 2009 and Sarkissian and Shcill, 2009). However, investigation into the consequences of foreign delisting is often overlooked. A few studies have investigated the delisting of Canadian stocks from the U.S. market or U.S. stocks from the Japanese market. For example, Das et al. (2004), Liu and Stowe (2005), and Witmer (2006) provide limited evidence on the delisting effect for one specific market. In addition, no studies have examined causal aspects of international delisting and the relationship between foreign listing and foreign delisting of the same set of securities. The major purpose of this paper is to a) examine the general consequences of a firm's delisting of its stock from overseas equity exchanges to its investors in terms of price, risk and liquidity, b) analyze the possibility of a reverse causation that runs from a set of market determinants to the delisting decisions, and c) compare the firm's stock performance of the initial foreign listing with the subsequent delisting. Employing the same set of stocks to study the overseas listing and delisting, we are in a position to directly compare the effect of cross-listing with foreign delisting. Through a design and application of a unique causality test, we identify the driving factors behind international delisting. We believe to the best of our knowledge that this type of study, an event-study and the subsequent counter event-study, has not been covered by any previous research. The comparison between cross-listing and delisting provides alternative ways to examine the benefits associated with cross-listing reported by previous studies. The relationship between these two events has implications for how the values created by cross-listing are lost through foreign delisting. Furthermore, most of the previous studies on cross-listing focus on listings in the U.S. market, and Karolyi (2006) points out this bias in understudying of global listings. In our study, we take a global perspective and employ stocks cross-listed in many different countries, especially in European countries, which host the majority of world listings. Therefore, our study complements the literature on cross-listing by providing research on world listings. Our study is related to Roosenboom and Van Dijk (2009) in that they also study cross-listings across different hosting markets. But they focus on the effect of cross-listing on stocks returns. In brief, employing the event study methodology, we examine the changes in price, liquidity, and risk in reaction to the foreign cross-listing and delisting of 355 stocks with 710 listings in 39 countries, with delisting dates ranging from 1992 to 2007. We then test whether the performance of the firm and the host market drives the delisting decision. Defining each cross-listing or delisting as an event, we examine the possible relation between the pre- and post-event returns. Comparisons between foreign listing and delisting are made to study the relationship between the two events. Finally, following Doidge et al. (2009) we focus on governance benefit/loss associated with cross-listing and delisting by examining the bonding hypothesis. More specifically, the listing and delisting premiums or losses are empirically related to a set of country specific explanatory variables to advance our understanding of the factors that affect listing and delisting.1 We find short-lived positive foreign listing and negative foreign delisting effects on stock valuation in the home market. We do not find significant changes in the market risk arising from foreign listing or delisting. The trading volume increases upon foreign listing and decreases upon foreign delisting. These changes persist in the long run. Causality analysis shows that firms delist in response to adverse bad host market performance and low firm trading volume in host markets. Our analysis also indicates that the market tends to overreact to cross-listing but not to delisting. No significant relation between foreign cross-listing premium and delisting abnormal returns is found. However, firms that benefit from cross-listing with reduced market risk tend to lose this benefit and encounter increased market risk after delisting. When analyzing the possible home and host country effects on the listing and delisting, we find evidence contradictory to the bonding hypothesis. Several reasons are offered in support of our finding. The remainder of this paper is organized as follows. Section 2 provides a brief review of literature pertinent to foreign cross-listing and delisting and establishes a set of hypotheses to guide the empirical research in this paper. Section 3 presents a summary of the data, and Section 4 discusses the methodology. Section 5 presents and analyzes the results. The last section concludes the paper.

In this study, we investigate the general consequences of foreign delisting to investors in terms of price, risk and liquidity, examine possible causes for international delisting, and compare the consequences of foreign listings with those from foreign delistings. We also probe into the relations between the pre- and post-event premium, and between listings and delisting effects. Our findings, particularly on the delistings, extend the prior research on both the listings and the delistings. Our results indicate that, after adjusting for the market risk, foreign listing is associated with positive listing premium, followed by immediate positive abnormal returns and subsequently negative abnormal returns, while delisting is associated with negative returns, and weak evidence of being followed by positive returns. The premiums or loss, associated with both the listings and the delistings, are temporary and do not affect the stock valuation permanently. We find that market risk increases and decreases after listing and delisting, but this effect is not statistically significant. Furthermore, on the average, trading volume increases after the listing and decreases after the foreign delisting and these changes in liquidity persist in the long run. 17 Even after we control for the market trend in trading volume, foreign listing/delisting still is associated with increased/decreased trading volume. Our probe into the causes for international delistings shows that firms tend to delist in response to low firm trading volume in the host market and low host market return. Such delisting events are expected to further reduce the trading volumes in the home markets. Our analysis of the relation between the pre- and post-event abnormal returns (ARs) and between the listing and delisting shows that market overreactions exist for foreign listings but not for foreign delistings. This analysis also shows that at firms that benefited from listing by providing more diversification to their investors lost this value after foreign delisting. The home and the listing countries’ attributes, i.e., IPI, rule of law and culture, affect our listing/delisting variables of interest, i.e., the CARs. But our findings do not support the bonding hypothesis. The home country's high IPI has more positive influence on the listing premium than that of the listing country. This is mostly due to the fact that previous studies supporting bonding hypothesis typically employ stocks listed in the U.S. whereas our data is dominated by cross-listings in Europe. The results remain similar after we control for the variations in the P/E ratios of the home and the host markets. We tend to consider our effort in this paper as a starting point in the analysis of foreign delisting. Further research on delisting, particularly on the expansion and refinement of the home and the host country attributes, on reverse causality, on inclusion of firm level data, and on the effects of delistings on other variables, is in order.