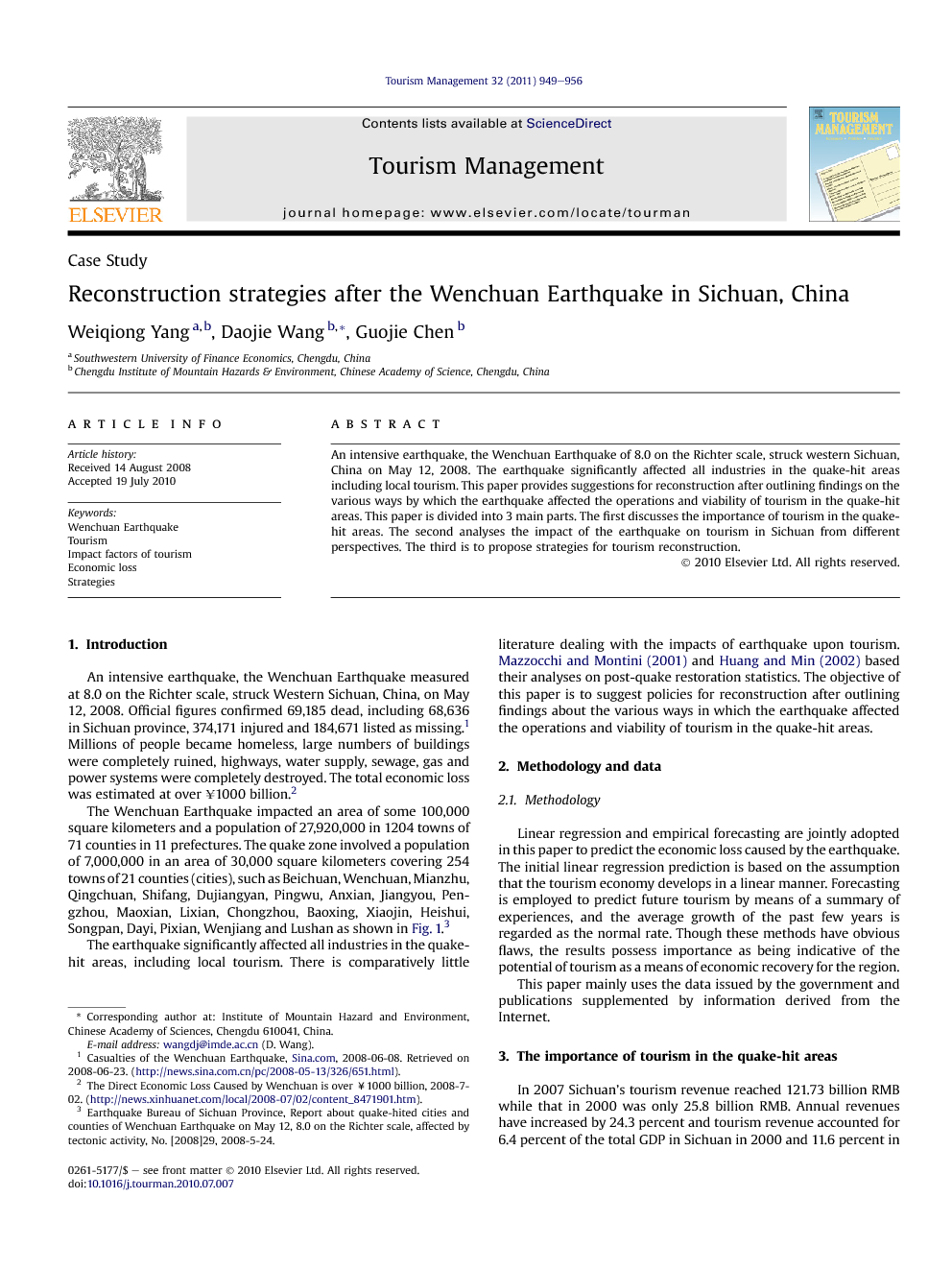 An intensive earthquake, the Wenchuan Earthquake measured at 8.0 on the Richter scale, struck Western Sichuan, China, on May 12, 2008. Official figures confirmed 69,185 dead, including 68,636 in Sichuan province, 374,171 injured and 184,671 listed as missing.1 Millions of people became homeless, large numbers of buildings were completely ruined, highways, water supply, sewage, gas and power systems were completely destroyed. The total economic loss was estimated at over ¥1000 billion.2 The Wenchuan Earthquake impacted an area of some 100,000 square kilometers and a population of 27,920,000 in 1204 towns of 71 counties in 11 prefectures. The quake zone involved a population of 7,000,000 in an area of 30,000 square kilometers covering 254 towns of 21 counties (cities), such as Beichuan, Wenchuan, Mianzhu, Qingchuan, Shifang, Dujiangyan, Pingwu, Anxian, Jiangyou, Pengzhou, Maoxian, Lixian, Chongzhou, Baoxing, Xiaojin, Heishui, Songpan, Dayi, Pixian, Wenjiang and Lushan as shown in Fig. 1.3 Full-size image (31 K) Fig. 1. Quake-hit areas in Sichuan. Figure options The earthquake significantly affected all industries in the quake-hit areas, including local tourism. There is comparatively little literature dealing with the impacts of earthquake upon tourism. Mazzocchi and Montini (2001) and Huang and Min (2002) based their analyses on post-quake restoration statistics. The objective of this paper is to suggest policies for reconstruction after outlining findings about the various ways in which the earthquake affected the operations and viability of tourism in the quake-hit areas.

To summarise, the tourism losses in Sichuan caused by the Wenchuan Earthquake are enormous, but the quake also offered some opportunities for Sichuan’s future tourism. The earthquake damage will negatively affect tourism development on a long-term basis. Yet tourism offers a potential to aid economic revival by capitalising on world interest in the area. Media do possess enormous interest in assessing and monitoring recovery after the disaster, and a carefully structured physical reconstruction plan accompanied by imaginative and targeted marketing campaigns can generate both domestic and international tourism demand to the economic benefit of the region. Accompanying capital investment in infrastructure will also generate income, employment and physical and symbolic signs of future hope and prosperity. The cost in terms of deaths, family disruption and sorrow has been high, but to do nothing would be to intensify those losses, and neither people nor government would wish this to occur. The current plans offer real hope and promise for future generations of Sichuan.