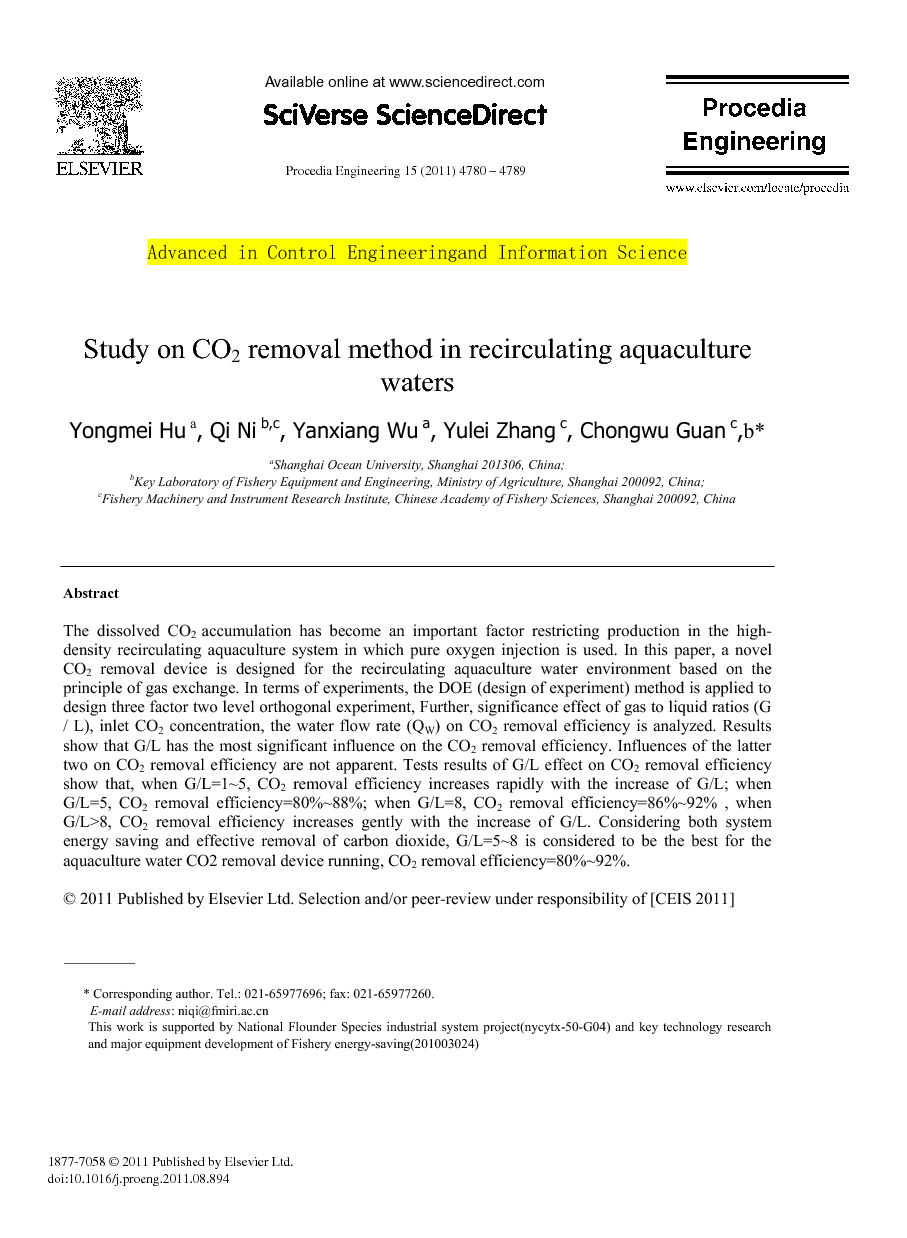 The high concentration of CO 2 is harmful to the fish in aquaculture waters environment. When the concentration of CO 2 exceeds the safe level, the amount of oxygen that the blood hemoglobin of fish can carry is reduced significantly and respiration distress can occur, even with high concentrations of dissolved oxygen in the water. M eanwhile, the whole system’s pH also decreases dramatically and the performance of biological purificati on is affected [1]. In the traditional culture model, because of the low stocking density, CO 2 doesn’t accumulate excessively, which do esn’t make fish dangerous. In the recirculating aquaculture system, the stocking density raises and the water exchange rate drops (about 10%)[2]. Consequently, large amounts of dissolved carbon dioxide will gr eatly restrict production. When stocking densities were less than 30 to 60kg/m 3 , conventional aeration systems would generally provide sufficient removal of CO 2 through transferring oxyg en into the water with airstones, surface agitation and water falls. However, with the increase of the fish density to 100kg/m 3 or higher, in order to make the aquaculture system more productive, pure oxygen systems become a widely used aerobic way to meet the demand of the normal growth of fish for dissolved oxygen,. For every 10mg/L of oxygen consumed, approximately 13–14 mg/L of CO2 excreted through fish gills. As a result, The CO2 accumulates to a high concentration through respiration of the fish and bi ological nitrification [3-5], which is great toxic to fish. The safe operating levels of CO2 depend on the species, development stage, and overall water quality [6]. In general recommendation, the CO2 concen tration of aquaculture water should be less than 10mg/L [7]. CO 2 removal technology of aquaculture waters in china is still in the pilot study stage, generally, a large-scale recirculating aquacu lture system does not set CO 2 removal link. However, the United States and Europe have used CO 2 removal device in the intensive recirculating aquaculture systems successively [8-10], the effective CO 2 removal has been achieved and fish prod uction per unit of water has been rised. Currently, the mainstream CO 2 removal devices are stripping columns [11]. Due to a lot of factors, accurately predicting the removal rate is very difficu lt. In this paper, through three factor two level orthogonal testing, the effect of gas to liquid ratios(G/L), inlet CO 2 concentration, water flow rate(Q W ) and their interactions on the CO 2 removal rate are studied and the best level combinations are discovered to achieve the effective CO 2 removal.