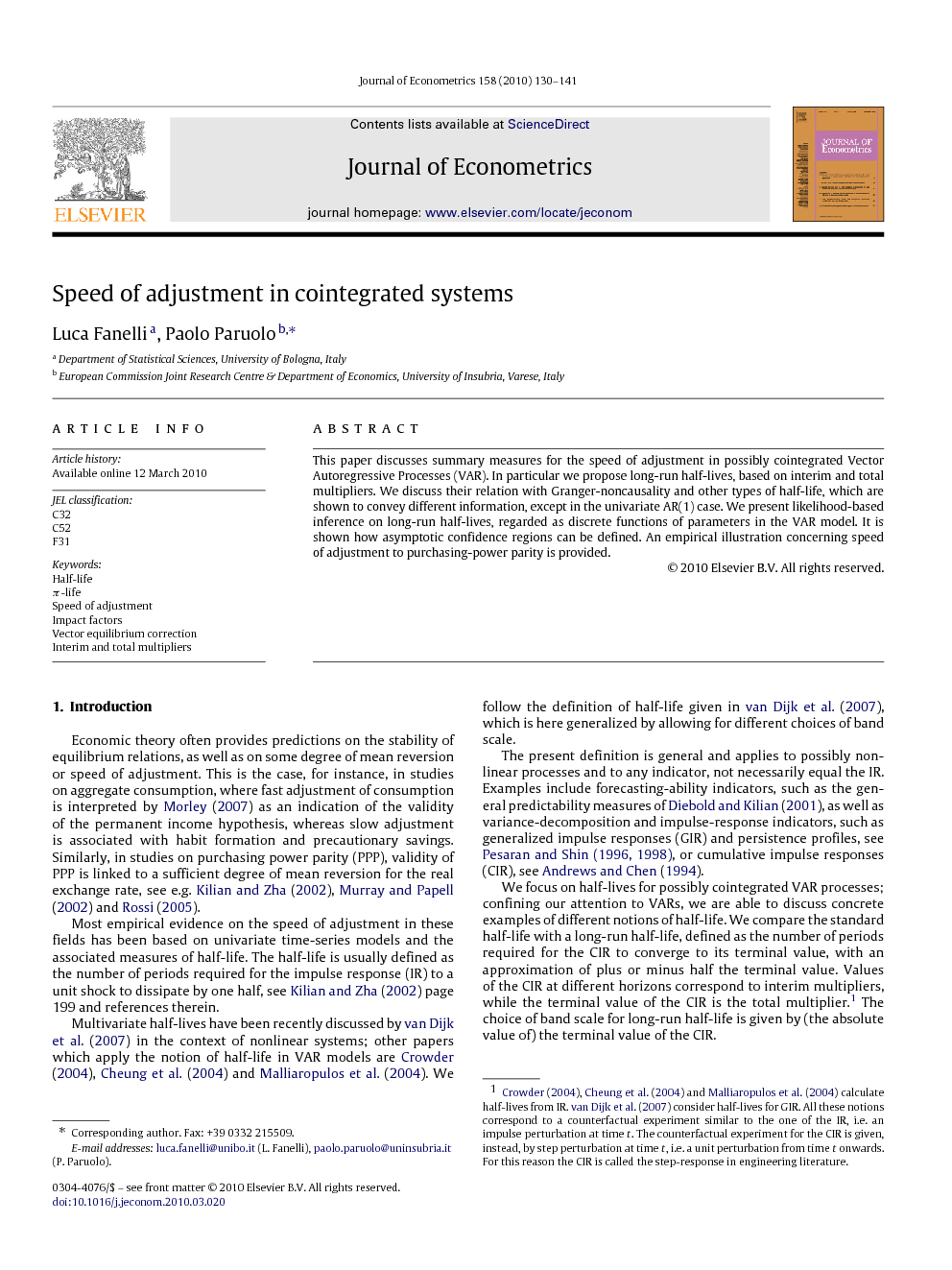 This paper discusses summary measures for the speed of adjustment in possibly cointegrated Vector Autoregressive Processes (VAR). In particular we propose long-run half-lives, based on interim and total multipliers. We discuss their relation with Granger-noncausality and other types of half-life, which are shown to convey different information, except in the univariate AR(1) case. We present likelihood-based inference on long-run half-lives, regarded as discrete functions of parameters in the VAR model. It is shown how asymptotic confidence regions can be defined. An empirical illustration concerning speed of adjustment to purchasing-power parity is provided.

In this paper we address the issue of measuring the speed of adjustment of economic variables to their long-run equilibria, in the context of cointegrated VAR processes. We define the long-run ππ-life as a measure of speed at which a given variable adjusts to its long-run value, in response to variations in another variable. The paper shows that the concept of ππ-life nests several special cases, which include short-run and long-run ππ-lives based on IR and CIR respectively. The two are related but different times; they give in general different results, except for the univariate AR(1) case. We discuss the relation of long-run ππ-lives with notions of (long-run) Granger-noncausality and generalized and structural impulse responses. We present likelihood-based inference on the long-run ππ-lives within the likelihood analysis described in Johansen (1996). We derive point estimators and asymptotic confidence sets for the long-run ππ-lives. We exploit the fact that long-run ππ-lives are (discrete) functions of the autoregressive coefficients to derive (discrete) confidence sets for them from the confidence set for the autoregressive coefficients. This construction allows one to consider confidence sets for several ππ-lives simultaneously, without affecting the asymptotic joint global coverage probability. This approach is general and it can be applied to other half-lives, such as short-run half-lives. We present an empirical illustration on PPP adjustment of deutschmark-dollar and yen-dollar exchange rates over the post-Plaza period. Long-run half-lives of real and nominal exchange rates coincide in response to shocks to other variables of the system and they are fairly in line with the predictions of sticky-price models. PPP adjustment in the long-run is dominated by nominal exchange rate movements; in turn, commodity prices seem to behave as the source of the permanent shocks driving the system and appear to be long-run neutral to exchange rate movements.