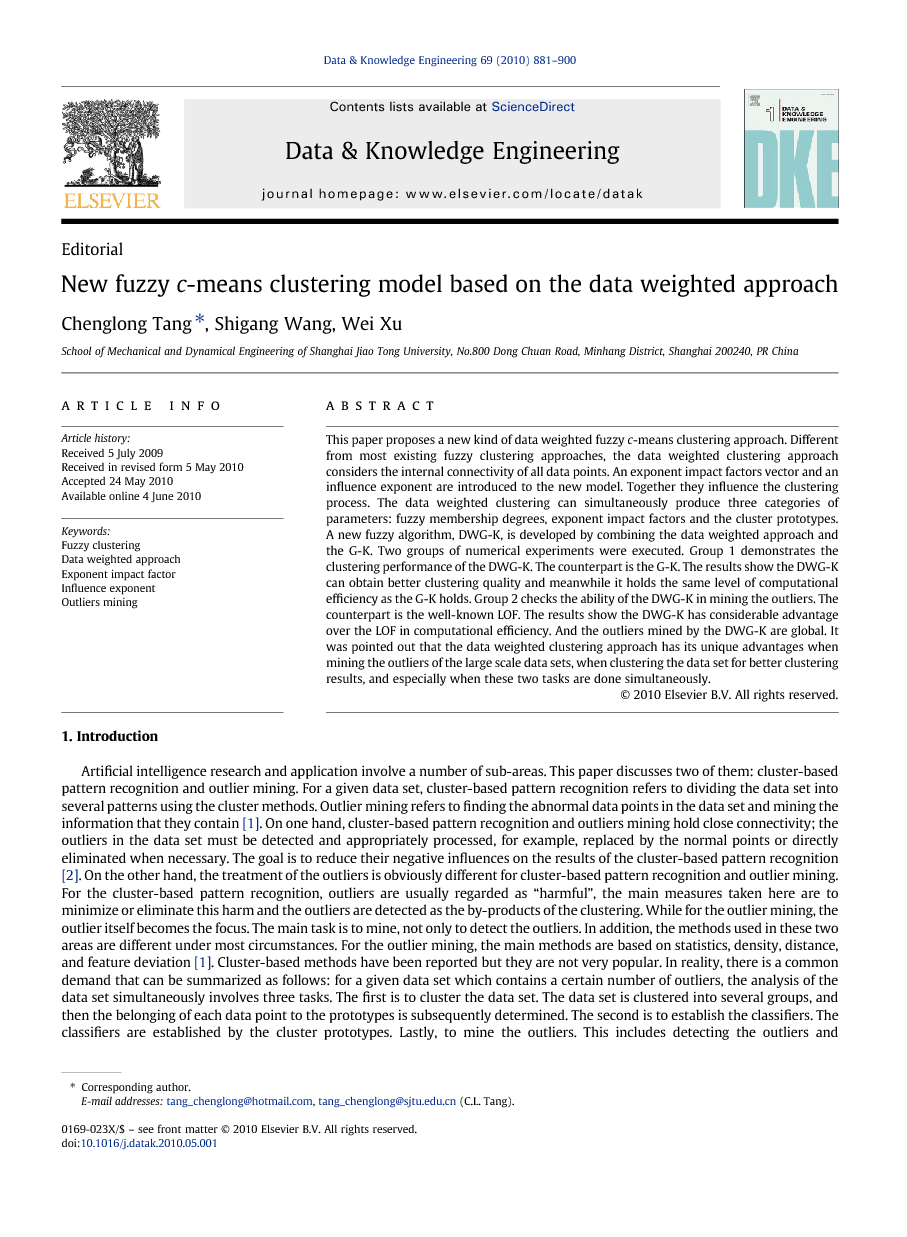 This paper reports a new data weighted fuzzy clustering approach. Its innovation lies in a kind of internal connectivity between all data points in the data set in the process of clustering. As well, exponent impact factors vector E (EIF(j)), the EIF(j) (j = 1…n) corresponding to the data xj (j = 1…n), and an influence exponent s are introduced to the objective function of the data weighted fuzzy clustering model. The existing fuzzy clustering methods mainly adjust the clustering process through the channel: (U, m). With this channel unchanged, the data weighted fuzzy clustering model introduced a second channel: (E, s). Through the two channels, there was a realization that different data points should be handled differently in the data weighted fuzzy clustering model. Additionally, the data weighted fuzzy clustering model presents a constraint to solve the problem in that “the product is equal to one”. However, if the ‘sum is one’ constraint is applied, when the size of the data set is very large, the model most likely will not run because the factors in the sum are too small. With the exception of the influence exponent s and fuzzy exponent m, which are given, the novel approach does not require other user defined parameters. E and U are updated after inputting their initial value, so the application of the novel approach does not require additional knowledge and experience. Moreover, s is a key parameter. Better clustering performance can be achieved by choosing the available s; s is also used to adjust the iterative speed. The latter is significant when mining the outliers in large scale or dynamic data sets. As an application of the novel approach, the DWG-K is developed by integrating the data weighted approach and the existing G-K. The DWG-K simultaneously outputs three categories of parameters: fuzzy membership degree matrix U, adaptive degree vector E and cluster prototype matrix V. They are respectively used to cluster, mine the outliers and establish the classifiers. The DWG-K shows its unique advantage by simultaneously achieving the above three outputs. The outliers mined by the DWG-K are global, and they express the relationship between the outliers and the whole data set. In addition, because DWG-K is basically a clustering method, the outliers mined by the DWG-K contain abundant information — for example, which clusters the outliers belong to. Therefore, the DWG-K is very suitable for mining the outliers. Finally, when the DWG-K is used to fulfill the clustering task, it holds a similar level of computational efficiency as most existing clustering models. When the DWG-K is used to fulfill the outliers mining task, it holds considerable advantage in the computation efficiency over the well-known density-based LOF. Some more efficient and targeted algorithms can potentially be developed by integrating the data weighted clustering approach and the existing clustering models. Succeeding works of the paper include studying more generalized forms of the data weighting functions. In particular, concerning the selection method of the influence exponent s, the experimental method is presented, but the mathematical reasoning and verification behind it have not been presented. This is an area to be extended upon in future research．