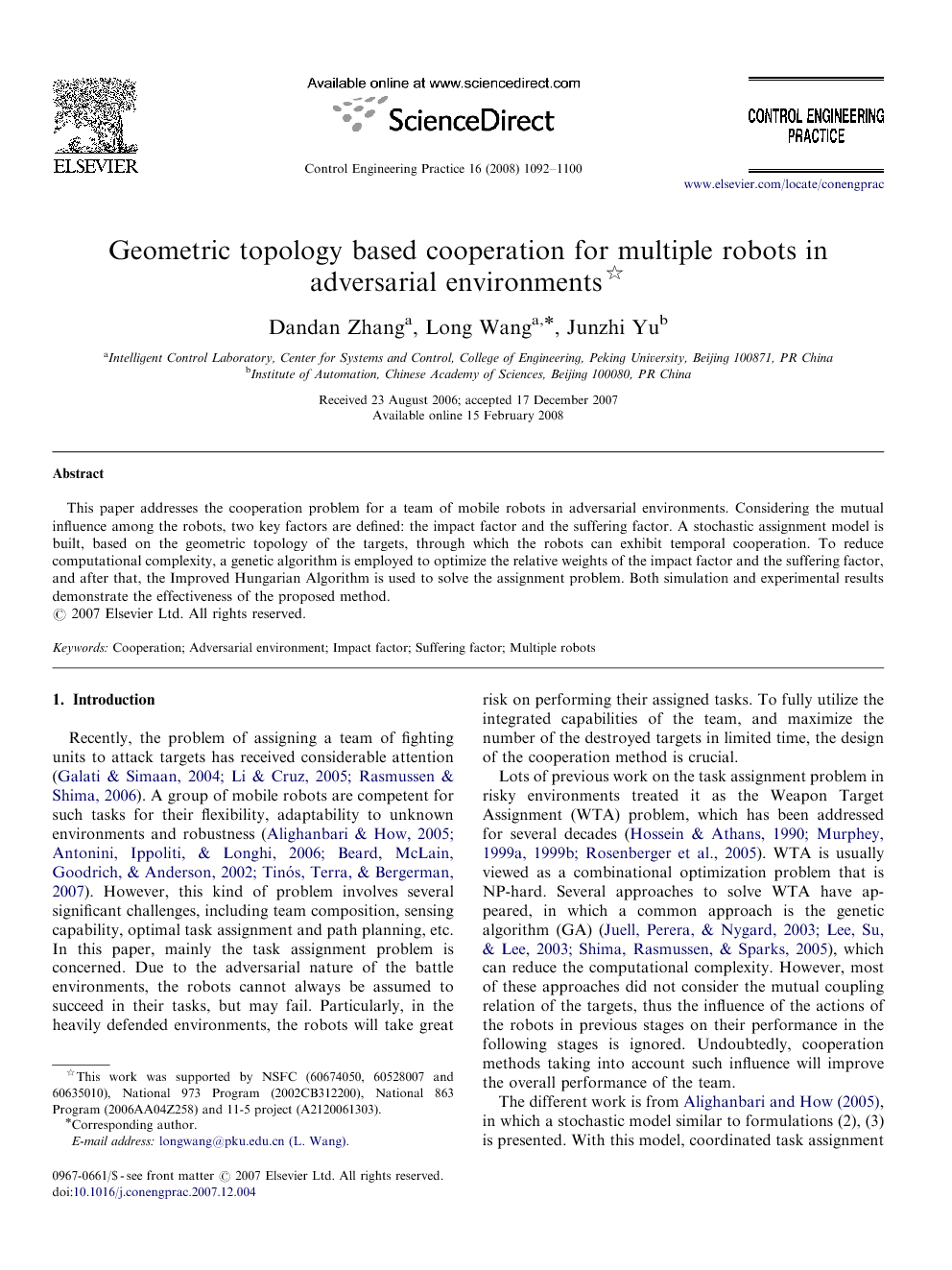 This paper addresses the cooperation problem for a team of mobile robots in adversarial environments. Considering the mutual influence among the robots, two key factors are defined: the impact factor and the suffering factor. A stochastic assignment model is built, based on the geometric topology of the targets, through which the robots can exhibit temporal cooperation. To reduce computational complexity, a genetic algorithm is employed to optimize the relative weights of the impact factor and the suffering factor, and after that, the Improved Hungarian Algorithm is used to solve the assignment problem. Both simulation and experimental results demonstrate the effectiveness of the proposed method.

Recently, the problem of assigning a team of fighting units to attack targets has received considerable attention (Galati and Simaan, 2004, Li and Cruz, 2005 and Rasmussen and Shima, 2006). A group of mobile robots are competent for such tasks for their flexibility, adaptability to unknown environments and robustness (Alighanbari and How, 2005, Antonini et al., 2006, Beard et al., 2002 and Tinós et al., 2007). However, this kind of problem involves several significant challenges, including team composition, sensing capability, optimal task assignment and path planning, etc. In this paper, mainly the task assignment problem is concerned. Due to the adversarial nature of the battle environments, the robots cannot always be assumed to succeed in their tasks, but may fail. Particularly, in the heavily defended environments, the robots will take great risk on performing their assigned tasks. To fully utilize the integrated capabilities of the team, and maximize the number of the destroyed targets in limited time, the design of the cooperation method is crucial. Lots of previous work on the task assignment problem in risky environments treated it as the Weapon Target Assignment (WTA) problem, which has been addressed for several decades (Hossein and Athans, 1990, Murphey, 1999a, Murphey, 1999b and Rosenberger et al., 2005). WTA is usually viewed as a combinational optimization problem that is NP-hard. Several approaches to solve WTA have appeared, in which a common approach is the genetic algorithm (GA) (Juell et al., 2003, Lee et al., 2003 and Shima et al., 2005), which can reduce the computational complexity. However, most of these approaches did not consider the mutual coupling relation of the targets, thus the influence of the actions of the robots in previous stages on their performance in the following stages is ignored. Undoubtedly, cooperation methods taking into account such influence will improve the overall performance of the team. The different work is from Alighanbari and How (2005), in which a stochastic model similar to formulations (2), (3) is presented. With this model, coordinated task assignment is exhibited with the additional knowledge of the implications of a UAV's actions on improving the expected performance of other UAVs in future steps. Taking advantage of the fact that the actions of each UAV can reduce the risk for other UAVs to achieve better performance, the model leads to coordinated plans of the robots which exploit optimally the coupling effects, thus to improve the survival probabilities and expected performance of the team. Thereafter, the assignment problem is solved by Dynamic Programming (DP) approach. DP was originally developed by R. Bellman in 1957. It is an optimization technique for formulating problems in which decisions are to be made in multiple stages. The problem is divided into several stages or subproblems, and is solved sequentially by taking a decision at each stage. DP is an implicit enumeration approach, and normally yields a global optimal solution. Unfortunately, the computational cost increases very rapidly with the number of the state variables (Walsh, 1975). Thereby, DP approach cannot satisfy the requirement of real-time task assignment as the problem dimension increases, especially when the spatial distribution of the vehicles is considered. As the targets can defend one another, the topology relation among them is quite important for the robots to determine the assignment strategy. Due to the defense relation among the targets, the action of one robot can reduce the risk of other robots or itself in the following stages. To utilize the maximum integrated capability of the robots, the temporal cooperation taking into account the defense topology of the targets is quite desirable. In the presented task assignment model, the defense topology among the targets is involved. In addition, the robots can be reused after it performs one task successfully. The initial locations of the robots can be arbitrary. The goal is to optimize an objective function, which involves the defense topology information of the targets and implicates the temporal cooperation of the robots. To reduce the computational complexity, GA is employed to determine the coefficients of the impact factor and the suffering factor in the objective function, and after that, the Improved Hungarian Algorithm (IHA) is developed to solve the assignment problem. It is to mention that although GA is not a novel approach for solving the optimization problem, here it is utilized to obtain the “coefficients” in the model, which result in the temporal cooperation of the robots. This is an essential difference with other GA approaches, which optimize the assignment directly. The proposed method is then evaluated through simulations and a Cooperative Bombing Task, which is performed on the biomimetic robotic fish platform (Fang et al., 2005 and Zhang et al., 2007). The rest of the paper is organized as follows. Section 2 gives a detailed description of the task in the adversarial environment. In Section 3, the cooperation method is presented. The simulation results are given in Section 4, and the experimental results are given in Section 5. Section 6 concludes the paper.

A fast geometric topology based cooperation method for multiple mobile robots has been given. The defense topology of the targets was used for the robots to make decision. Through this method, the robots could exhibit temporal cooperation which improved the survival capability of the team. To reduce the computational complexity, GA was utilized for obtaining the coefficients in the objective function, and IHA was used to solve the assignment problem. Both simulations and experiments performed by the robotic fish validated the effectiveness of the proposed method. Although evaluated on the biomimetic robotic fish platform, the proposed approach is generally applicable to the ground robots, the underwater vehicles, and the aerial vehicles. In the future, the asynchronization problem of the robots will be addressed. Also the path planning and collision avoidance of the robots will be considered. These aspects will increase the complexity of the cooperation, but are important in real-world adversarial environments.