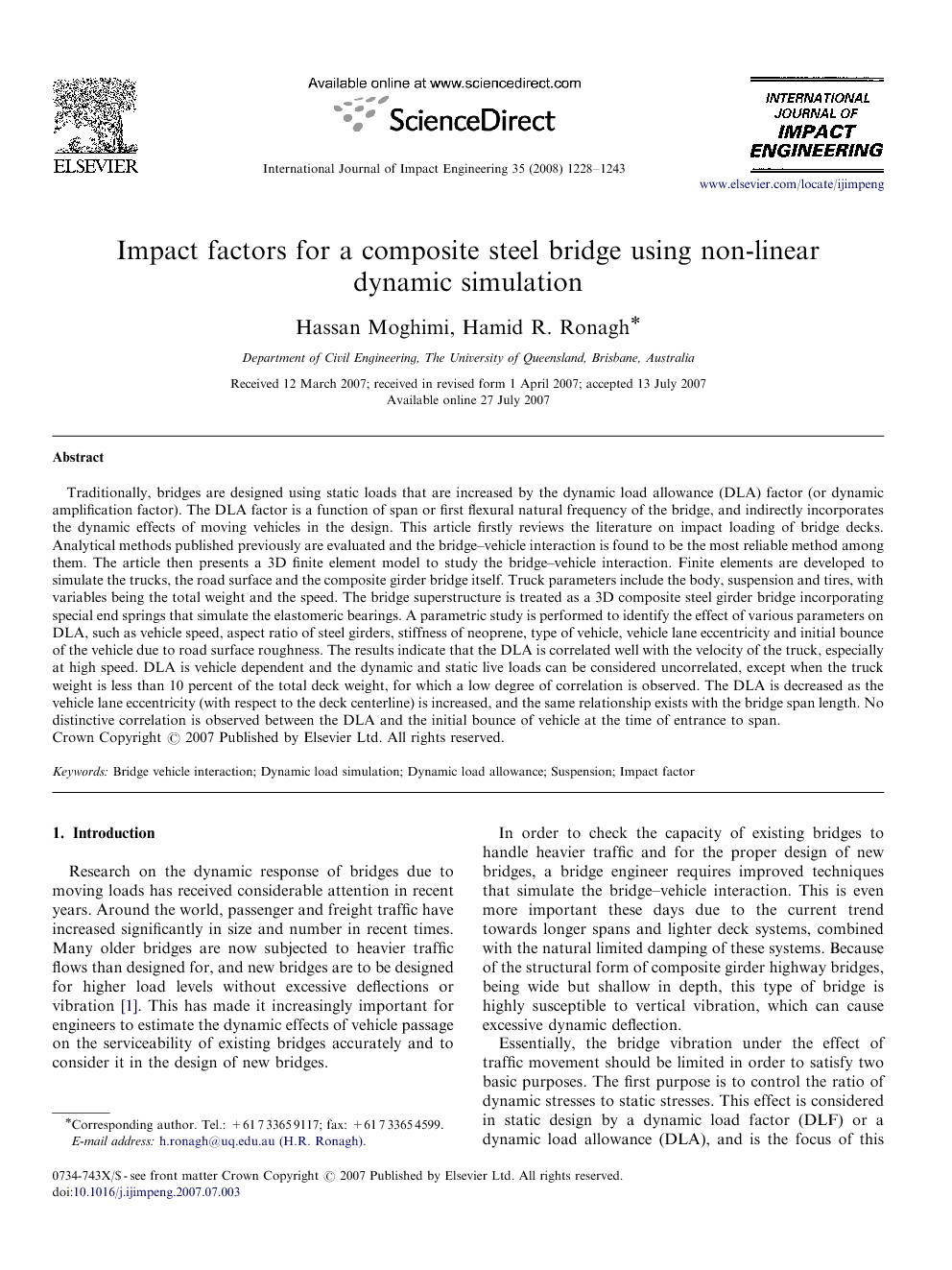 Traditionally, bridges are designed using static loads that are increased by the dynamic load allowance (DLA) factor (or dynamic amplification factor). The DLA factor is a function of span or first flexural natural frequency of the bridge, and indirectly incorporates the dynamic effects of moving vehicles in the design. This article firstly reviews the literature on impact loading of bridge decks. Analytical methods published previously are evaluated and the bridge–vehicle interaction is found to be the most reliable method among them. The article then presents a 3D finite element model to study the bridge–vehicle interaction. Finite elements are developed to simulate the trucks, the road surface and the composite girder bridge itself. Truck parameters include the body, suspension and tires, with variables being the total weight and the speed. The bridge superstructure is treated as a 3D composite steel girder bridge incorporating special end springs that simulate the elastomeric bearings. A parametric study is performed to identify the effect of various parameters on DLA, such as vehicle speed, aspect ratio of steel girders, stiffness of neoprene, type of vehicle, vehicle lane eccentricity and initial bounce of the vehicle due to road surface roughness. The results indicate that the DLA is correlated well with the velocity of the truck, especially at high speed. DLA is vehicle dependent and the dynamic and static live loads can be considered uncorrelated, except when the truck weight is less than 10 percent of the total deck weight, for which a low degree of correlation is observed. The DLA is decreased as the vehicle lane eccentricity (with respect to the deck centerline) is increased, and the same relationship exists with the bridge span length. No distinctive correlation is observed between the DLA and the initial bounce of vehicle at the time of entrance to span.

Research on the dynamic response of bridges due to moving loads has received considerable attention in recent years. Around the world, passenger and freight traffic have increased significantly in size and number in recent times. Many older bridges are now subjected to heavier traffic flows than designed for, and new bridges are to be designed for higher load levels without excessive deflections or vibration [1]. This has made it increasingly important for engineers to estimate the dynamic effects of vehicle passage on the serviceability of existing bridges accurately and to consider it in the design of new bridges. In order to check the capacity of existing bridges to handle heavier traffic and for the proper design of new bridges, a bridge engineer requires improved techniques that simulate the bridge–vehicle interaction. This is even more important these days due to the current trend towards longer spans and lighter deck systems, combined with the natural limited damping of these systems. Because of the structural form of composite girder highway bridges, being wide but shallow in depth, this type of bridge is highly susceptible to vertical vibration, which can cause excessive dynamic deflection. Essentially, the bridge vibration under the effect of traffic movement should be limited in order to satisfy two basic purposes. The first purpose is to control the ratio of dynamic stresses to static stresses. This effect is considered in static design by a dynamic load factor (DLF) or a dynamic load allowance (DLA), and is the focus of this study. The second purpose is to control the perceptible vibration. While of no dangerous structural consequence, too much vibration may undermine users’ confidence in the structure [2]. The dynamic response of a bridge depends on the dynamic characteristics of the superstructure, especially natural frequency, dynamic properties of the vehicle and its configuration, and the contribution of pavement roughness. In some extreme loading situations, the mass of the vehicle may be significant compared with the mass of the bridge. Neglecting the combined inertia in these cases may lead to substantial errors. Furthermore, vehicle suspension and roadway unevenness are important factors affecting the response of bridges and should be taken into account. Some published studies [1], [3] and [4] suggest that dynamic amplification depends on a wide range of factors including speed, ratio of live load to dead load, tire and suspension stiffness, effect of braking, bounce on suspension, damping of the bridge and vehicle, and bridge configuration, including simple or continuous span, number of spans, straight, skewed, or horizontally curved span. A number of techniques have been developed for calculating the dynamic effects of wheel load on bridges. However, most have been based on simple, one- or two-dimensional models [1], [5] and [6]. It has been only recently that more comprehensive models are presented [7], [8], [9] and [10]. This paper presents a numerical model to study bridge–vehicle interaction. 3D finite element models are developed for trucks, road surface (roughness) and composite girder bridges. Truck parameters include the body (mass), suspensions and tires, and its variables include the total weight and speed. The bridge superstructure is treated as a 3D composite steel girder bridge with simply supported span incorporating its elastomeric bearing at each pier. Bridge properties include the mass, flexural stiffness, span length and elastomeric bearing characteristics. The pavement roughness is determined by surface conditions of the approach and the bridge. Deformations are assumed to remain within the elastic range and DLA+1 is defined as the maximum dynamic deflection divided by the maximum static deflection at mid-span. A parametric study is performed to identify the effects of various parameters on the dynamic load and consequently on the DLA of the composite girder bridge, such as vehicle speed, effect of the aspect ratio (ratio of height to length) of a steel girder of a composite deck, stiffness of neoprene, type of vehicle, effect of the vehicle lane eccentricity with respect to deck centerline and initial bounce of the vehicle due to road surface roughness. For each case, the DLA is presented in graphs as a function of the aforementioned variables.

The following conclusions can be made from the findings: – The finite element analysis results indicate that the DLA is correlated well with the velocity of the truck, especially at high speeds. The bridge response is significantly influenced by the vehicle speed [7], [8] and [23], i.e. as the vehicle speed increases, dynamic deflection and the acceleration of deck increase, whereas the vibration frequency is unaffected. It was also found that tire forces are greatly influenced by the speed of the vehicle as different dynamic modes are excited at different speeds. As a rule of thumb, when the ratio of the total vehicle mass to the total superstructure mass is less than 10 percent, the transient frequency ratio represents the dynamic response of the system properly. In this case, as long as the transient frequency ratio is not greater than 10 percent, negligible DLA is produced in the superstructure. – Simulated deflections indicate that DLA increases as the aspect ratio of a composite steel girder bridge increases. – The stiffness of neoprene bearing has a significant effect on the DLA of a composite steel girder bridge. The excessive DLA of the bridge under consideration, particularly closer to the ends, was found to be attributable to the wrong design choices for the neoprene bearing (excessive height and small area) that made it far too flexible vertically. Using an imaginary neoprene bearing that complied with AASHTO requirements reduced the amount of DLA in all cases analyzed. – The range of calculated values shows that DLA is vehicle dependent. Past studies [3], [4] and [13] found a wide scatter of DLA values depending on the vehicle type, varying with the vehicle weight and the geometry of suspension units. The current study provided some limited evidence in support of this. Simulated deflections indicated that the dynamic and static live loads can be considered uncorrelated except when the mass ratio of a vehicle to the bridge superstructure is less than 0.1, for which a low degree of correlation was observed. For ratios above 0.1, there was no correlation between the maximum static and dynamic deflections of the bridge. In other words, the dynamic component of deflection was independent of static component; consequently, the DLA decreased as the vehicle weight increased. Although there is a small tendency for impact or DLA to reduce as the truck weight increases, the effect is small. Large DLAs tend to occur with both light and heavy vehicles over a wide range of static vehicle masses. – The results indicated that the DLA decreased as the vehicle lane eccentricity (with respect to the deck centerline) increased. This occurred as the torsion and transverse bending deformation of the deck increased. This finding is in close agreement with new experimental studies [7] and [10]. – A weak correlation was observed between the DLA and the initial bounce of a vehicle at the time of entering the span. Due to poor construction of paving adjacent to the expansion joints, bumps are gradually formed on the road's surface and as the vehicle passes over them, an initial bounce, which is correlated to the speed and the weight of vehicle, is generated. Although this initial bounce is damped by the vehicle's suspension system within a short period of time, it can still produce a high initial vibration in the deck, particularly near the beginning of the span where the vehicle still possesses considerable kinetic energy. As a result, a higher DLA is obtained closer to the entrance than at the mid-span. – The results show that the DLA defined by 1992 AASHTO [12] matches the current analyses results better than other codes, particularly for simply supported composite girder bridges under normal conditions and for vehicles traveling at normal speeds. 1983 OHBD [14] and AUSTROADS [11] assign conservative values for DLAs, especially for long-span bridges.