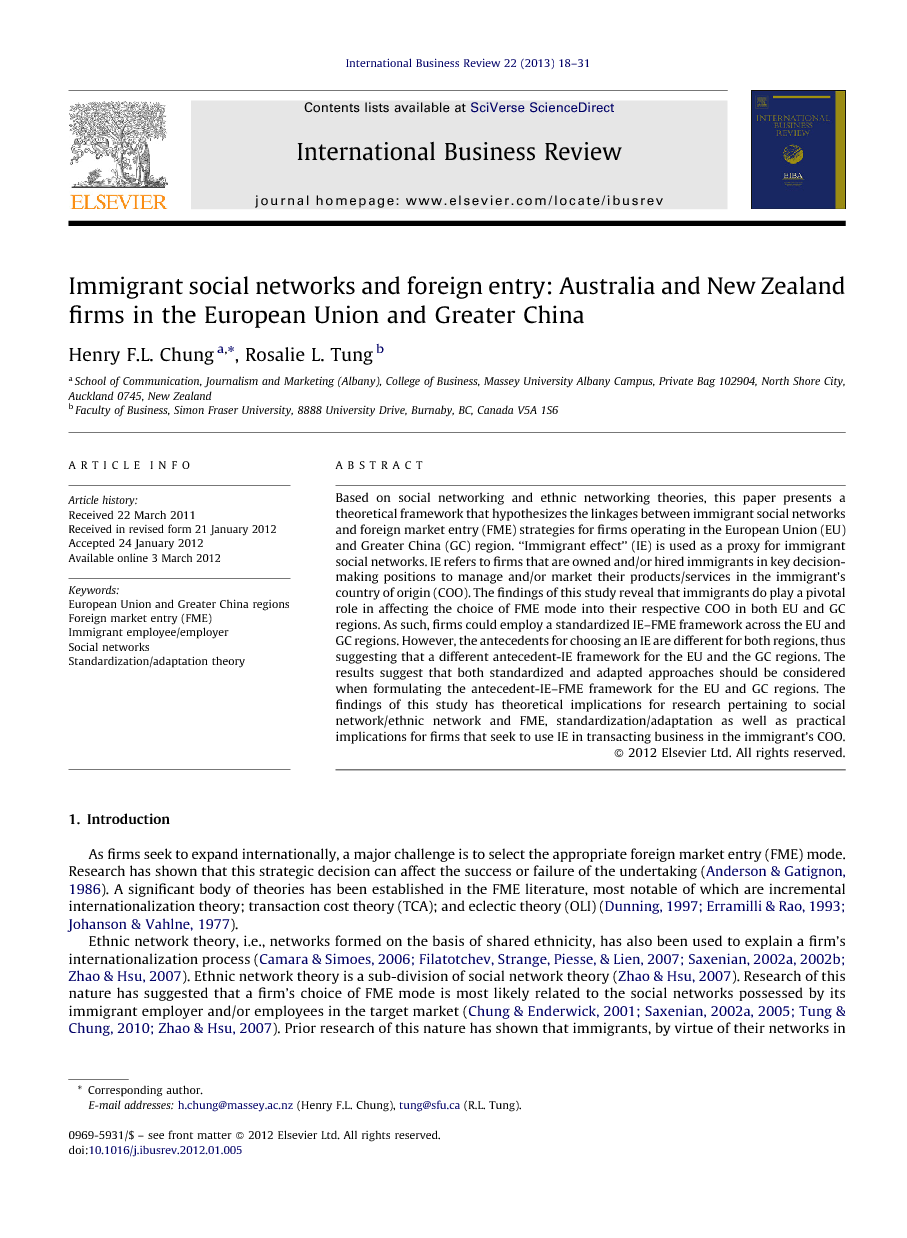 Based on social networking and ethnic networking theories, this paper presents a theoretical framework that hypothesizes the linkages between immigrant social networks and foreign market entry (FME) strategies for firms operating in the European Union (EU) and Greater China (GC) region. “Immigrant effect” (IE) is used as a proxy for immigrant social networks. IE refers to firms that are owned and/or hired immigrants in key decision-making positions to manage and/or market their products/services in the immigrant's country of origin (COO). The findings of this study reveal that immigrants do play a pivotal role in affecting the choice of FME mode into their respective COO in both EU and GC regions. As such, firms could employ a standardized IE–FME framework across the EU and GC regions. However, the antecedents for choosing an IE are different for both regions, thus suggesting that a different antecedent-IE framework for the EU and the GC regions. The results suggest that both standardized and adapted approaches should be considered when formulating the antecedent-IE–FME framework for the EU and GC regions. The findings of this study has theoretical implications for research pertaining to social network/ethnic network and FME, standardization/adaptation as well as practical implications for firms that seek to use IE in transacting business in the immigrant's COO.

As firms seek to expand internationally, a major challenge is to select the appropriate foreign market entry (FME) mode. Research has shown that this strategic decision can affect the success or failure of the undertaking (Anderson & Gatignon, 1986). A significant body of theories has been established in the FME literature, most notable of which are incremental internationalization theory; transaction cost theory (TCA); and eclectic theory (OLI) (Dunning, 1997, Erramilli and Rao, 1993 and Johanson and Vahlne, 1977). Ethnic network theory, i.e., networks formed on the basis of shared ethnicity, has also been used to explain a firm's internationalization process (Camara and Simoes, 2006, Filatotchev et al., 2007, Saxenian, 2002a, Saxenian, 2002b and Zhao and Hsu, 2007). Ethnic network theory is a sub-division of social network theory (Zhao & Hsu, 2007). Research of this nature has suggested that a firm's choice of FME mode is most likely related to the social networks possessed by its immigrant employer and/or employees in the target market (Chung and Enderwick, 2001, Saxenian, 2002a, Saxenian, 2005, Tung and Chung, 2010 and Zhao and Hsu, 2007). Prior research of this nature has shown that immigrants, by virtue of their networks in both their country of residency (COR) and country of origin (COO), can organize “transnational communities” to facilitate the conduct of international business. Thus, transnational communities can enable smaller-sized firms to compete with large multinational corporations in transacting business across international boundaries (Chung et al., 2012, Faist, 2000, Saxenian, 2002b, Snel et al., 2006 and Vertovec, 1999). In fact, Saxenian (2002b, p. 185) has suggested that they may represent “a more flexible and responsive mechanism for long distance transfers of skill and know-how, particularly between very different business cultures or environments”. Furthermore, transnational communities have been hypothesized to exist in both developing and developed nations (Levitt, 2001, Saxenian, 2002b and Snel et al., 2006). This study seeks to build upon the existing literature and extend our understanding of the relationships between immigrant social networks and the choice of FME in two important aspects: first, compared to the traditional theories (e.g., TCA) that are used to explain the behavior of FME, the relationship between social networking and FME has been under-researched; as such, there is need for further insights on this paradigm (Zhao & Hsu, 2007). Though existing social networking research has investigated the role of ethnic networking in FME selection concerning firms’ operation in the developing regions (e.g., Filatotchev et al., 2007 and Zhao and Hsu, 2007), there is evidence that the relationship between ethnic networking and FME can apply to firms that operate in the developed economies (Snel et al., 2006). This suggests that perhaps a standardized IE–FME framework is likely to exist across developing and developed regions that stem from the knowledge and network of immigrants in their COO. Standardization strategy asserts that firms can adopt a uniform strategy or process formulation across their operations in different host markets or regions (Chung, 2003 and Jain, 1989). The use of a standardized framework across both developing and developed regions could allow firms to take advantage of cost saving, uniformed image and easier implementation that are associated with a standardization strategy (Chung, 2010, Jain, 1989, Levitt, 1983 and Samiee and Roth, 1992). In turn, these advantages can help firms establish or maintain their international competitive advantage when operating in the foreign host markets. As such, in this study we will explore whether a standardized framework pertaining IE–FME can be effectively deployed by firms operating in the developed and developing regions. To test this hypothesis, we will focus on firms with operations in the European Union (EU) and those that transact business in the Greater China (GC) region. The EU is a key member of the developed economy while GC represents a major economic force in the developing region. The findings of this study could lend credence to the assertion by Tsui and Farh (1997) and Redding, Norman, and Schlander (1993) that social network/ties are indeed universal. The extension of standardization theory to the IE–FME paradigm could also shed new light on the extant literature on international standardization strategies (e.g., organizational learning, decision-making structure) (Chung, 2010 and Lages et al., 2008). Second, by using data from a sample of Australian and New Zealand manufacturing and service firms, this paper will seek to develop a conceptual framework that posits the antecedent-IE relationship in the EU and GC regions. Such a framework can identify the antecedents and outcomes pertaining to IE and FME for both the developed and developing economies (Tung & Chung, 2010). As such, the findings of this study have important implications for firms that seek to operate in both developed and developing markets and for academics who seek to establish a standardized research framework across countries at different levels of economic development (Chung, 2003, Chung, 2010, Jain, 1989 and Zou and Cavusgil, 2002). In summary in this study we intend to formulate a standardized/adapted set of antecedents-IE–FME guidance for firms operating in the EU and GC regions.