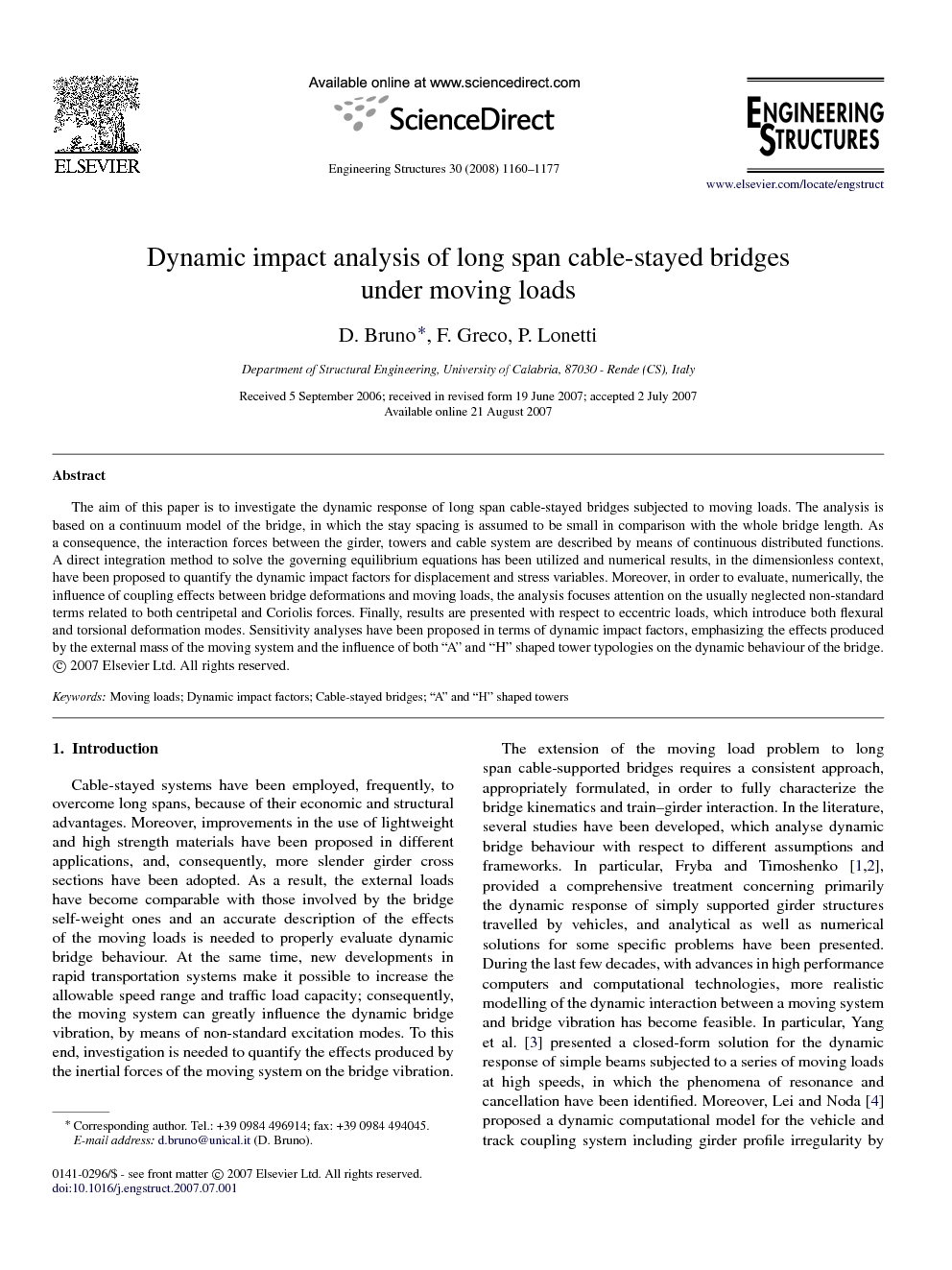 The aim of this paper is to investigate the dynamic response of long span cable-stayed bridges subjected to moving loads. The analysis is based on a continuum model of the bridge, in which the stay spacing is assumed to be small in comparison with the whole bridge length. As a consequence, the interaction forces between the girder, towers and cable system are described by means of continuous distributed functions. A direct integration method to solve the governing equilibrium equations has been utilized and numerical results, in the dimensionless context, have been proposed to quantify the dynamic impact factors for displacement and stress variables. Moreover, in order to evaluate, numerically, the influence of coupling effects between bridge deformations and moving loads, the analysis focuses attention on the usually neglected non-standard terms related to both centripetal and Coriolis forces. Finally, results are presented with respect to eccentric loads, which introduce both flexural and torsional deformation modes. Sensitivity analyses have been proposed in terms of dynamic impact factors, emphasizing the effects produced by the external mass of the moving system and the influence of both “A” and “H” shaped tower typologies on the dynamic behaviour of the bridge.

Long span bridges under moving loads have been analysed for both flexural and torsional deformation modes, in terms of dynamic impact factors for typical kinematic and stress variables of the bridge. The effects of the inertial description of the moving system on the dynamic bridge behaviour have been investigated, by means of a parametric study developed in terms of both moving loads and bridge characteristics. The influence of the inertial forces are considerable, while those corresponding to non-standard contributions arising from Coriolis and centripetal accelerations determine the major amplifications, mainly at high speeds of the moving system. The inertial effects of the moving system have been discussed with respect to typical geometrical and stiffness parameters of the bridge, emphasizing the amplification effects produced by the inertial forces of the moving system. For eccentric loads, sensitivity analyses have been developed in terms of dynamic impact factors and maximum normalized displacements with respect to both “A” and “H” shaped tower typologies. In the framework of the “A” shaped tower typologies, the coupling behaviour between torsional and transversal flexural deformations has been discussed. In particular, the influence of the transverse displacements has been investigated, by means of sensitivity analyses. This establishes that, for an in-plane loading condition, the effect of transverse deformability on the dynamic behaviour of the bridge is practically negligible. Moreover, numerical results have shown that, in comparisons with the “H” shaped tower topology, the “A” shaped ones, even if having greater dynamic amplification factors, are characterized by enhanced stiffness properties, which are able to efficiently reduce torsional bridge deformation. The investigation is developed in terms of the main dimensionless parameters related to both geometric and stiffness properties of the bridge. As a result, a parametric study may be useful in the design procedure since the dynamic impact factors for typical deformation and stress variables can be determined in advance.