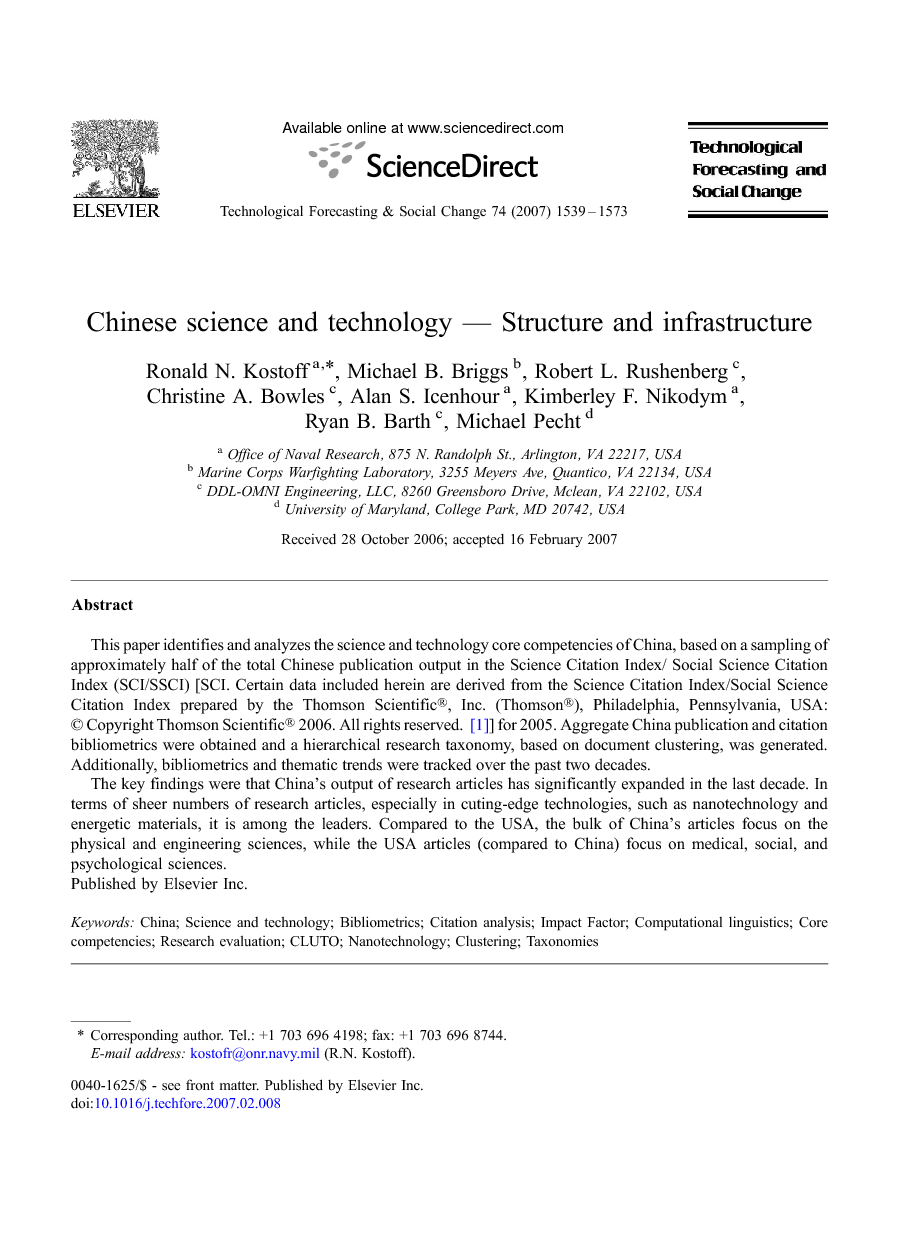 This paper identifies and analyzes the science and technology core competencies of China, based on a sampling of approximately half of the total Chinese publication output in the Science Citation Index/ Social Science Citation Index (SCI/SSCI) [SCI. Certain data included herein are derived from the Science Citation Index/Social Science Citation Index prepared by the Thomson Scientific®, Inc. (Thomson®), Philadelphia, Pennsylvania, USA: © Copyright Thomson Scientific® 2006. All rights reserved. [1]] for 2005. Aggregate China publication and citation bibliometrics were obtained and a hierarchical research taxonomy, based on document clustering, was generated. Additionally, bibliometrics and thematic trends were tracked over the past two decades. The key findings were that China's output of research articles has significantly expanded in the last decade. In terms of sheer numbers of research articles, especially in cuting-edge technologies, such as nanotechnology and energetic materials, it is among the leaders. Compared to the USA, the bulk of China's articles focus on the physical and engineering sciences, while the USA articles (compared to China) focus on medical, social, and psychological sciences.

There are many reasons to understand the state and trends in a county's science and technology (S&T). For example, Kostoff et al. [2] conducted a text mining assessment of the global nanotechnology literature including that of the USA, India and China. Pecht [3] noted that China has made significant achievements in hi-tech areas that are keys to economic development and has begun to gain ground in the world's S&T community. This paper presents the text mining of a sub-set of China's national research core competencies in terms of the identification of China's main research thrusts, volume of research output in main research thrusts, and bibliometric and thematic temporal trends. 2. Approach and results

China's publication of SCI research articles has had an annual exponential growth rate of 20% over the last 25 years. The major themes of these articles have shifted gradually over time from multi-disciplinary science, medicine, and life science in 1980 to materials, chemistry, and physics in 2005, in that order. The major journals in which Chinese researchers publish have Impact Factors (a proxy metric for quality) that average almost an order of magnitude less than those of the major journals they reference. These major publication journals have a high domestic component and, on average, relatively recent SCI access dates. Beyond increased productivity and recent sponsorship, recent SCI access by numerous journals must be considered as a contributor to the apparent high SCI growth rate of Chinese research articles. However, while the present median Impact Factor of the major journals in which Chinese researchers publish is relatively low, the time trend is positive. The presence of Chinese-authored papers in very high quality journals, on average, is outpacing overall Chinese research article growth. Collaboration with external countries produces a substantial increase in numbers of Chinese articles published in very high Impact Factor journals, but produces negligible change in median citations of overall Chinese publications. Collaboration's major impact is at the high end. The major Chinese research article producer, the Chinese Academy of Science, has common thematic interests with many of the Chinese institutions, but does not co-publish to the same extent. Many of the institutions not connected to the main Chinese network through common thematic interests are from Hong Kong, suggesting the remnants of some degree of technical thematic independence of Hong Kong from the more traditional Mainland institutions. When comparing China–Japan collaborations with China–USA collaborations, the collaborative research relationship with Japan appears to be more quid pro quo than is the relationship with the USA, given the emphasis of the Japanese articles on nanotechnology first and biomedical second and the emphasis of the USA articles on biomedical first and nanotechnology second. In comparing highly cited to poorly cited Chinese-authored documents, it was found that: – Highly cited documents are published in the international journals, whereas poorly cited documents are published in domestic Chinese journals. The broad technical areas in the highly and poorly cited groups are relatively similar. – Historically, most of the author names associated with the highly cited documents were non-Asian, suggesting that the Chinese participants were contributors to larger non-Chinese driven research programs. In recent years, the Chinese participation in the most cited papers has increased to about half. The names associated with the least cited papers are all Chinese. – In recent years, the institutions associated with the most cited papers are roughly half Chinese/half USA, showing the disproportionate contribution of USA institutions to highly cited Chinese research. Further, the two main Hong Kong universities have an order of magnitude higher relative representation (based on total publications) on the highly cited papers than their most visible Mainland counterparts (Chinese Academy of Science, Tsing Hua University, Zhejiang University). – The USA is the predominant collaborator on the highly cited papers, having about five times the relative representation expected based on its collaboration with all China research. USA is a key collaborator with China in almost every technical category identified in the technical structure taxonomy, with Japan being a close second. Malaysia was the strongest collaborator in the ‘Crystal and Chemical Structure, Synthesis’ category. The difference in thematic emphasis between the USA and China is dramatic! China emphasizes the physical and engineering sciences that underpin defense and commercial needs. The USA emphasizes research areas focused on medical, psychological, and social problems. There are even research areas where China leads the USA in absolute numbers of research articles published. In those areas, China's investment allocation relative to that of the USA is greater than four. Moreover, when the time trends in these areas are examined, the much higher Chinese gradients relative to those of the USA imply that the gap will only widen in the future.