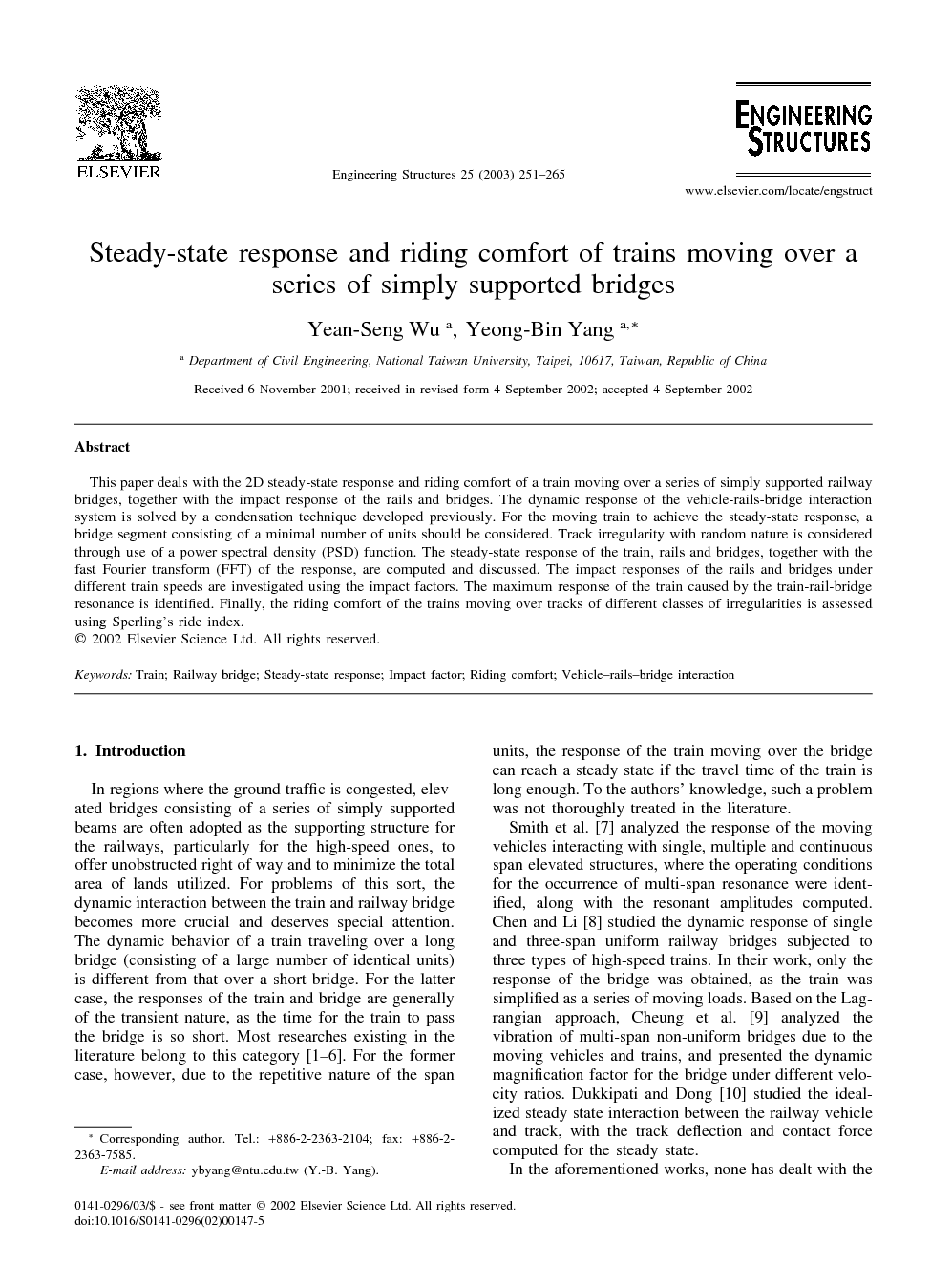 This paper deals with the 2D steady-state response and riding comfort of a train moving over a series of simply supported railway bridges, together with the impact response of the rails and bridges. The dynamic response of the vehicle-rails-bridge interaction system is solved by a condensation technique developed previously. For the moving train to achieve the steady-state response, a bridge segment consisting of a minimal number of units should be considered. Track irregularity with random nature is considered through use of a power spectral density (PSD) function. The steady-state response of the train, rails and bridges, together with the fast Fourier transform (FFT) of the response, are computed and discussed. The impact responses of the rails and bridges under different train speeds are investigated using the impact factors. The maximum response of the train caused by the train-rail-bridge resonance is identified. Finally, the riding comfort of the trains moving over tracks of different classes of irregularities is assessed using Sperling’s ride index.

In regions where the ground traffic is congested, elevated bridges consisting of a series of simply supported beams are often adopted as the supporting structure for the railways, particularly for the high-speed ones, to offer unobstructed right of way and to minimize the total area of lands utilized. For problems of this sort, the dynamic interaction between the train and railway bridge becomes more crucial and deserves special attention. The dynamic behavior of a train traveling over a long bridge (consisting of a large number of identical units) is different from that over a short bridge. For the latter case, the responses of the train and bridge are generally of the transient nature, as the time for the train to pass the bridge is so short. Most researches existing in the literature belong to this category [1], [2], [3], [4], [5] and [6]. For the former case, however, due to the repetitive nature of the span units, the response of the train moving over the bridge can reach a steady state if the travel time of the train is long enough. To the authors’ knowledge, such a problem was not thoroughly treated in the literature. Smith et al. [7] analyzed the response of the moving vehicles interacting with single, multiple and continuous span elevated structures, where the operating conditions for the occurrence of multi-span resonance were identified, along with the resonant amplitudes computed. Chen and Li [8] studied the dynamic response of single and three-span uniform railway bridges subjected to three types of high-speed trains. In their work, only the response of the bridge was obtained, as the train was simplified as a series of moving loads. Based on the Lagrangian approach, Cheung et al. [9] analyzed the vibration of multi-span non-uniform bridges due to the moving vehicles and trains, and presented the dynamic magnification factor for the bridge under different velocity ratios. Dukkipati and Dong [10] studied the idealized steady state interaction between the railway vehicle and track, with the track deflection and contact force computed for the steady state. In the aforementioned works, none has dealt with the steady-state vibration of the train moving over multi-unit railway bridges using realistic vehicle and bridge models that take into account the dynamic effect of the track system. For the purpose of assessing the riding comfort of passengers, while enhancing the maneuverability of the train, it is necessary to investigate the dynamic response of the train, track and bridge, considering the interaction among the various components of the train-railway bridge system, including in particular the steady-state response. The interaction between the moving train and the sustaining bridge makes the equations of motion for the two subsystems coupled and non-stationary. To solve this problem, a dynamic condensation technique has been developed in Reference [11] for decoupling the two sets of equations of motion. The present study can be regarded an extension of the theoretical framework established in Reference [11] to deal with the 2D steady-state response of a train moving over a bridge system that consists of a number of bridge units, a problem common in railway engineering, but not very well addressed in the literature. In particular, the riding comfort of the train is evaluated using a comfort index based on the vertical acceleration response of the train. In order to help the readers grasp the method of analysis used, some of the fundamental equations derived in Reference [11] will be presented. However, care is exerted to restrict the level of repetition to a minimum.

A procedure for analyzing the vehicle-rails-bridge system was presented, by which the dynamic response of each subsystem can be computed. The procedure was then applied to investigating the steady-state response and riding comfort of the train moving over a railway bridge comprising a series of simply supported beams. The following are the conclusions made from the numerical studies: (1) The steady-state response of the train moving over a smooth track displays periodic behaviors, of which the dominant frequencies relate to the train speed and the bridge length. (2) The vibrations of the rails and bridge caused by the passing train also possess some characteristic frequencies related to the train speed and the vehicle length. (3) Resonance can occur on the interaction system of the train, rails, and bridge, as the vehicle length, frequencies of the bridge and train speed meet some specific relations, which can result in dramatic amplification of the response of each component. (4) The resonant effect on the rails and bridge responses was underestimated by existing specifications for the high-speed range, which should be considered in the design of railway bridges involving flexible bridge structures or for trains moving at high speeds. (5) The riding comfort of the train can be significantly affected by the presence of track irregularity. It remains nearly independent of the train speed in the moderate to high speed range. (6) The effect of the track system should be taken into account in the analyzing the train–bridge system. Otherwise, one may underestimate the impact effect of the bridge and overestimate the vibration response of the train.