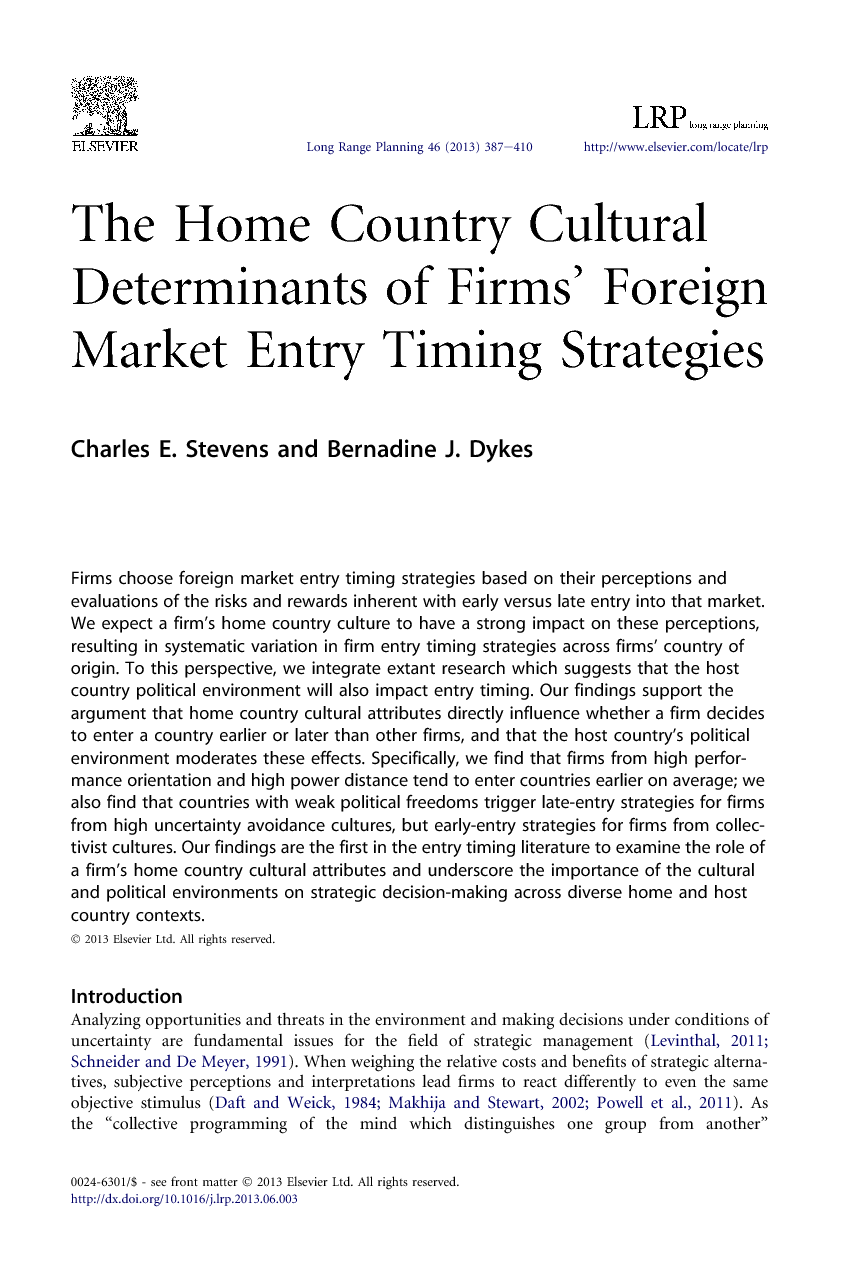 Firms choose foreign market entry timing strategies based on their perceptions and evaluations of the risks and rewards inherent with early versus late entry into that market. We expect a firm's home country culture to have a strong impact on these perceptions, resulting in systematic variation in firm entry timing strategies across firms' country of origin. To this perspective, we integrate extant research which suggests that the host country political environment will also impact entry timing. Our findings support the argument that home country cultural attributes directly influence whether a firm decides to enter a country earlier or later than other firms, and that the host country's political environment moderates these effects. Specifically, we find that firms from high performance orientation and high power distance tend to enter countries earlier on average; we also find that countries with weak political freedoms trigger late-entry strategies for firms from high uncertainty avoidance cultures, but early-entry strategies for firms from collectivist cultures. Our findings are the first in the entry timing literature to examine the role of a firm's home country cultural attributes and underscore the importance of the cultural and political environments on strategic decision-making across diverse home and host country contexts.

Our results show that a firm's home country culture influences its entry timing strategy, which is consistent with the institutional theory perspective that a firm's home country context, of which culture forms a large part, influences behavior (Schneider and De Meyer, 1991). These results are also consistent with the literature on other aspects of firms' entry strategies, such as entry mode and location choice (Barkema and Vermeulen, 1997, Erramilli, 1996 and Kogut and Singh, 1988), but is a new finding of critical importance for the entry timing literature. By examining the impact of four specific cultural attributes on entry timing strategy, the current study represents an attempt to address a key lacuna in the entry timing literature, with significant implications for researchers and practitioners alike. Moreover, by examining the moderating effect of the host country political environment, we address the tension in the literature about the role of host country political conditions on entry timings strategies. At a broader level, we believe that our findings point to the need to integrate behavioral, institution-based perspectives with objective, resource-based perspectives already present in the extant literature, in order to build a comprehensive theory (cf. Suarez and Lanzolla, 2007) that can accurately explain and predict firm entry timing decisions in the global competitive arena.