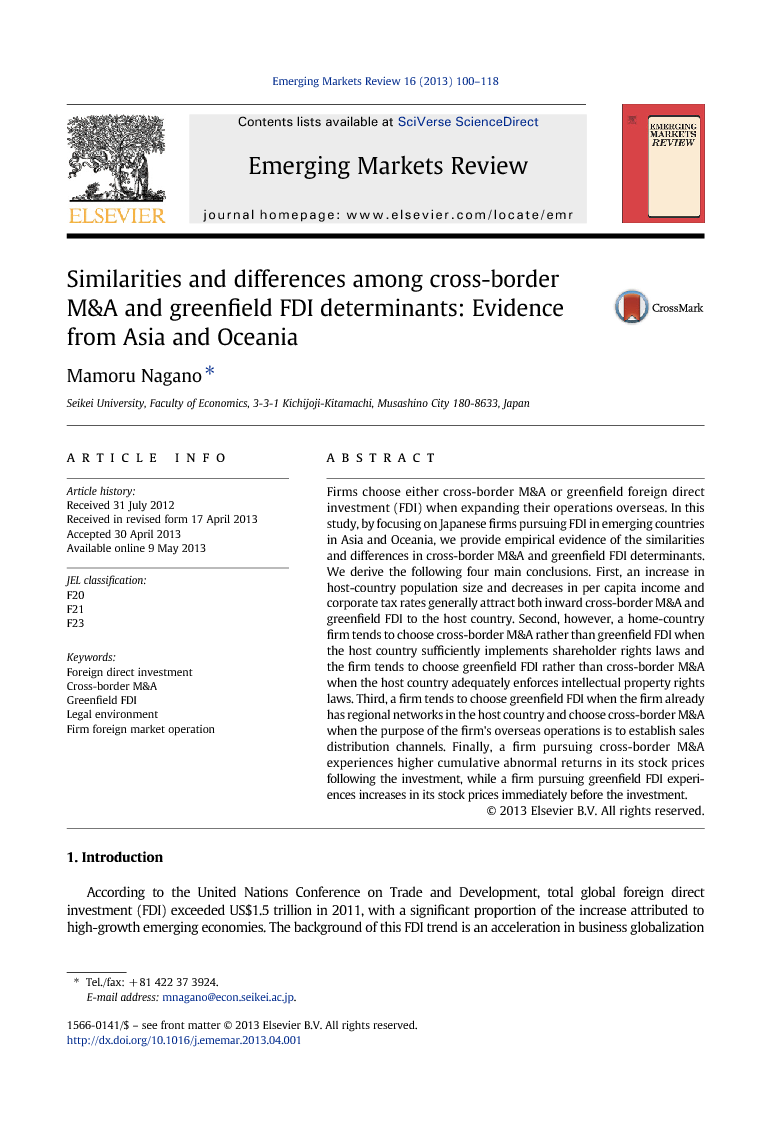 According to the United Nations Conference on Trade and Development, total global foreign direct investment (FDI) exceeded US$1.5 trillion in 2011, with a significant proportion of the increase attributed to high-growth emerging economies. The background of this FDI trend is an acceleration in business globalization driven by the promotion of the free trade and investment policies of national governments coupled with the recent dramatic growth in emerging economies. The diversification of foreign market operations is now an essential firm strategy for pursuing profit maximization in this era of globalization, and thus whether firms choose cross-border M&A or greenfield FDI in order to expand their operations overseas is also a crucial managerial judgment. In response to the dramatic increase in cross-border M&A over the past decade, a number of researchers examine the influencing factors for such M&A investment decisions. Nocke and Yeaple (2007), for example, find that the international production factor mobility of home-country firms is a determinant of cross-border M&A, while Giovanni (2005) and Erel et al. (2012) assert that the level of the development of the host countries' capital markets and legal environments are determinants. Further, although LaPorta et al. (2006) do not directly examine the determinants of cross-border M&A, they find that the legal environment concerning investor protection and capital market development are positively related. Head and Ries (2008), Uysal et al. (2008), and Ahern et al. (2012) conclude that geographical distance, similarity of native language, and historical relationship between the two countries are determinants of cross-border M&A, respectively. Finally, Ferreira et al. (2009) assert that the probability of incoming cross-border M&A in the host country increases as its overall foreign ownership ratio increases. As Neary (2009) concludes after reviewing the theoretical literature, previous studies implicitly assume that greenfield FDI accounts for the majority of total FDI. These studies of greenfield FDI regard intellectual property rights (IPR) as a major determinant of firms' decisions to expand overseas. Previous studies investigate the relationship between the legal environment concerning IPR and FDI inflows in emerging countries but present conflicting results. For example, the theoretical studies by Helpman (1993), Maskus and Penubarti (1995), Glass and Saggi (2002), and Lai (1998) all assert that an enhancement in IPR legal protection laws decreases FDI inflows, whereas those by Braga et al. (1998), Javorcik (2004), and Branstetter et al. (2011) argue the opposite. On the other hand, the research by Lee and Mansfield (1996), Maskus (1998), Smith (2001), Rafiquzzaman (2002), Park and Lippoldt (2005), Branstetter et al. (2006), and Nair-Reichert and Duncan (2008) find both positively and negatively signed coefficients regarding the relationship between IPR protection laws and FDI inflows in host countries. However, although studies of both cross-border M&A and greenfield FDI determinants have increased in recent years, those analyzing the similarities and differences between those determinants are still generally lacking.1 By recognizing this void in the current literature, this paper therefore contributes to the existing literature by examining these determinants by type of FDI and, consequently, by evidencing the heterogeneity of cross-border M&A and greenfield FDI determinants, which have so far received little scholarly attention. This study examines whether common factors lead to both cross-border M&A and greenfield FDI and assesses whether such factors influence one investment direction over the other. Specifically, we focus on nations in Asia and Oceania as host countries (i.e., Indonesia, Malaysia, Thailand, the Philippines, Hong Kong, Australia, New Zealand, Singapore, South Korea, Taiwan, China, and India) and Japanese firms as home-country investors. The remainder of the paper is organized as follows. In Section 2, we formulate the hypotheses and empirical strategy and describe the methodology used to test these hypotheses. In Section 3, we present our empirical results. Section 4 discusses our new empirical evidence and concludes.