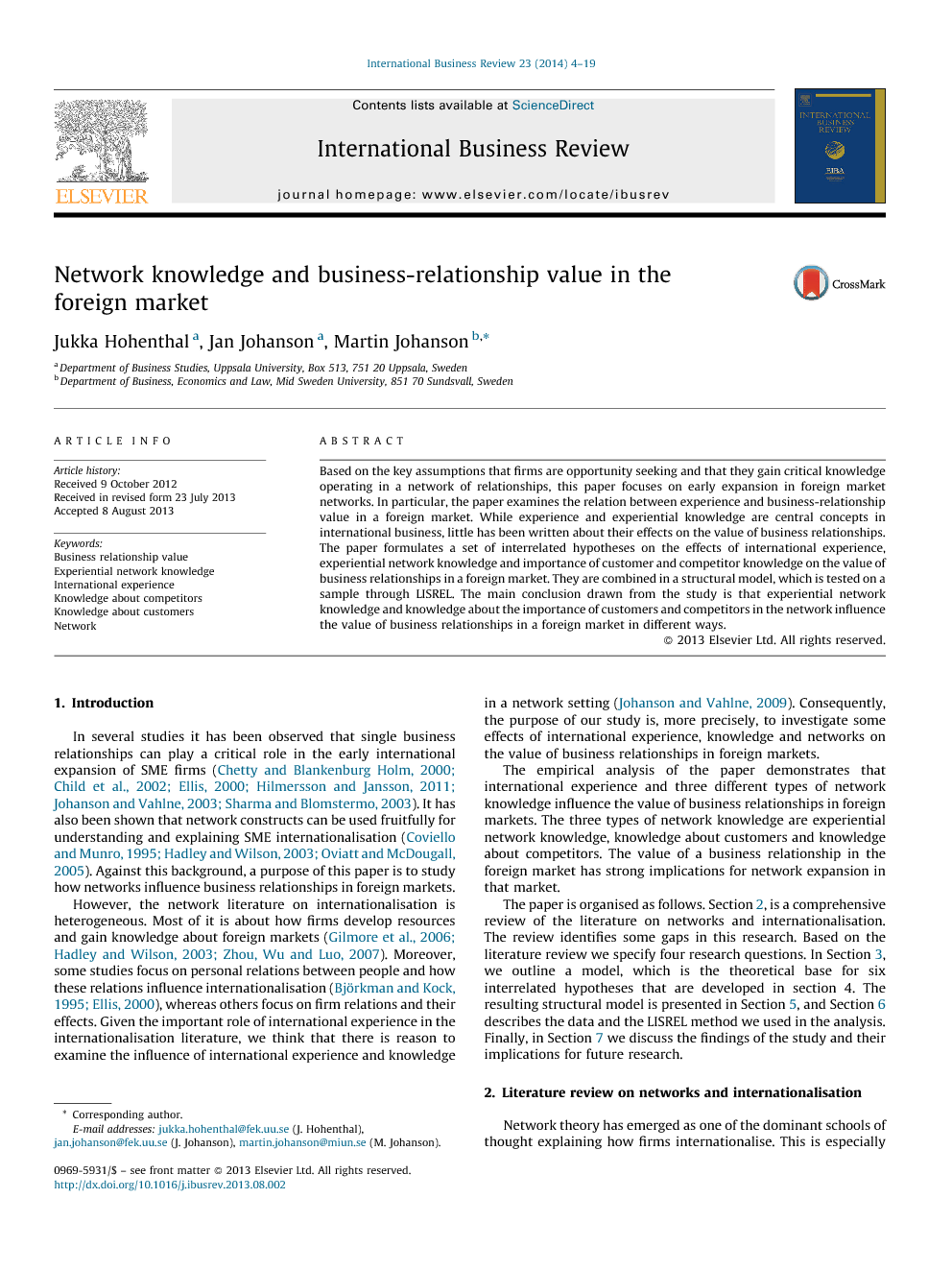 In several studies it has been observed that single business relationships can play a critical role in the early international expansion of SME firms (Chetty and Blankenburg Holm, 2000, Child et al., 2002, Ellis, 2000, Hilmersson and Jansson, 2011, Johanson and Vahlne, 2003 and Sharma and Blomstermo, 2003). It has also been shown that network constructs can be used fruitfully for understanding and explaining SME internationalisation (Coviello and Munro, 1995, Hadley and Wilson, 2003 and Oviatt and McDougall, 2005). Against this background, a purpose of this paper is to study how networks influence business relationships in foreign markets. However, the network literature on internationalisation is heterogeneous. Most of it is about how firms develop resources and gain knowledge about foreign markets (Gilmore et al., 2006, Hadley and Wilson, 2003 and Zhou et al., 2007). Moreover, some studies focus on personal relations between people and how these relations influence internationalisation (Björkman and Kock, 1995 and Ellis, 2000), whereas others focus on firm relations and their effects. Given the important role of international experience in the internationalisation literature, we think that there is reason to examine the influence of international experience and knowledge in a network setting (Johanson and Vahlne, 2009). Consequently, the purpose of our study is, more precisely, to investigate some effects of international experience, knowledge and networks on the value of business relationships in foreign markets. The empirical analysis of the paper demonstrates that international experience and three different types of network knowledge influence the value of business relationships in foreign markets. The three types of network knowledge are experiential network knowledge, knowledge about customers and knowledge about competitors. The value of a business relationship in the foreign market has strong implications for network expansion in that market. The paper is organised as follows. Section 2, is a comprehensive review of the literature on networks and internationalisation. The review identifies some gaps in this research. Based on the literature review we specify four research questions. In Section 3, we outline a model, which is the theoretical base for six interrelated hypotheses that are developed in section 4. The resulting structural model is presented in Section 5, and Section 6 describes the data and the LISREL method we used in the analysis. Finally, in Section 7 we discuss the findings of the study and their implications for future research.