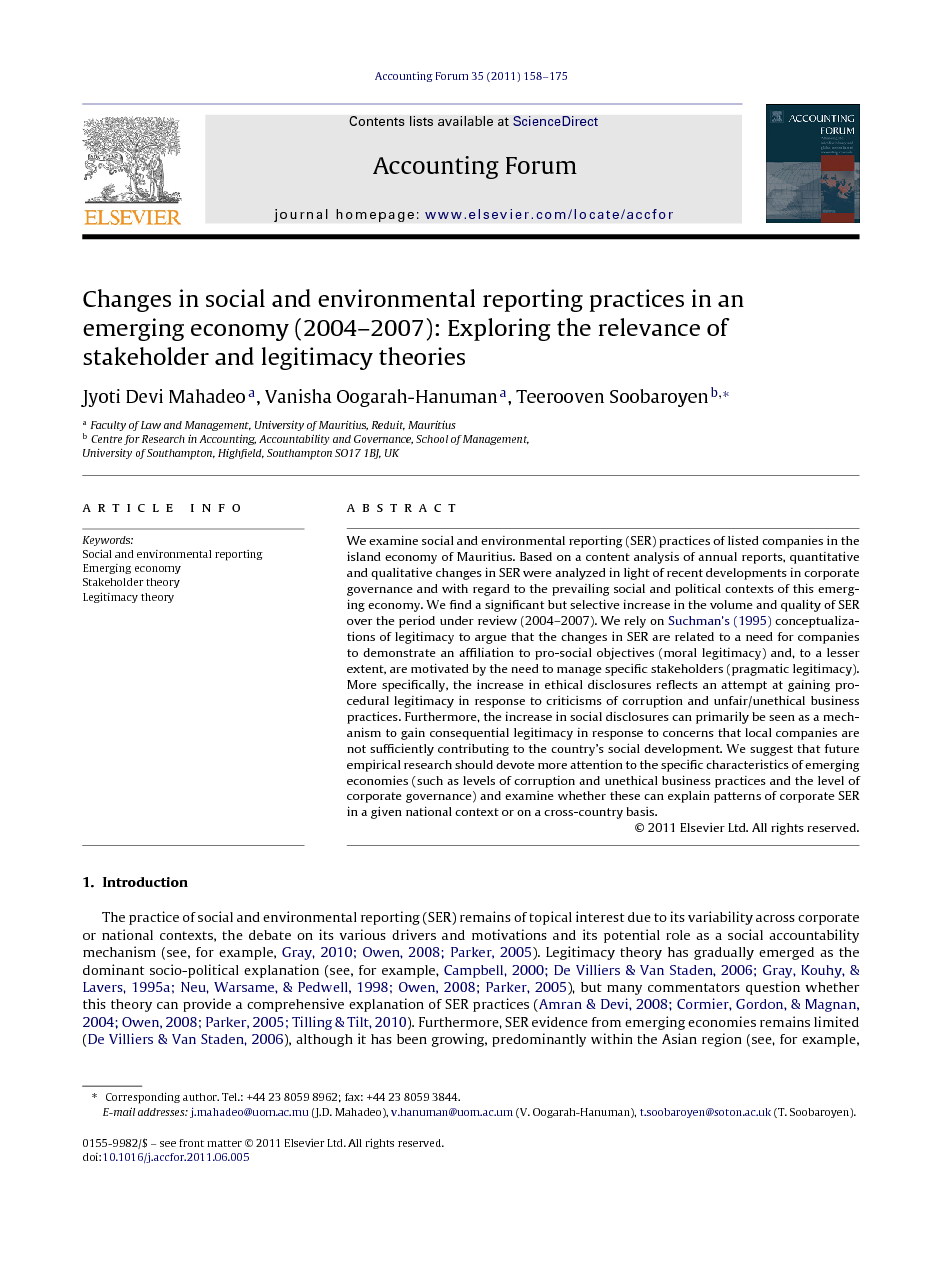 We examine social and environmental reporting (SER) practices of listed companies in the island economy of Mauritius. Based on a content analysis of annual reports, quantitative and qualitative changes in SER were analyzed in light of recent developments in corporate governance and with regard to the prevailing social and political contexts of this emerging economy. We find a significant but selective increase in the volume and quality of SER over the period under review (2004–2007). We rely on Suchman's (1995) conceptualizations of legitimacy to argue that the changes in SER are related to a need for companies to demonstrate an affiliation to pro-social objectives (moral legitimacy) and, to a lesser extent, are motivated by the need to manage specific stakeholders (pragmatic legitimacy). More specifically, the increase in ethical disclosures reflects an attempt at gaining procedural legitimacy in response to criticisms of corruption and unfair/unethical business practices. Furthermore, the increase in social disclosures can primarily be seen as a mechanism to gain consequential legitimacy in response to concerns that local companies are not sufficiently contributing to the country's social development. We suggest that future empirical research should devote more attention to the specific characteristics of emerging economies (such as levels of corruption and unethical business practices and the level of corporate governance) and examine whether these can explain patterns of corporate SER in a given national context or on a cross-country basis.

The practice of social and environmental reporting (SER) remains of topical interest due to its variability across corporate or national contexts, the debate on its various drivers and motivations and its potential role as a social accountability mechanism (see, for example, Gray, 2010, Owen, 2008 and Parker, 2005). Legitimacy theory has gradually emerged as the dominant socio-political explanation (see, for example, Campbell, 2000, De Villiers and Van Staden, 2006, Gray et al., 1995a, Neu et al., 1998, Owen, 2008 and Parker, 2005), but many commentators question whether this theory can provide a comprehensive explanation of SER practices (Amran and Devi, 2008, Cormier et al., 2004, Owen, 2008, Parker, 2005 and Tilling and Tilt, 2010). Furthermore, SER evidence from emerging economies remains limited (De Villiers & Van Staden, 2006), although it has been growing, predominantly within the Asian region (see, for example, Amran and Devi, 2008, Belal and Owen, 2007, Elijido-Ten et al., 2010, Haniffa and Cooke, 2005, Islam and Deegan, 2008 and Ratanajongkol et al., 2006). Informed by the above, the aim of this study is to analyse the extent of SER practices in Mauritius. We rely on content analysis to identify, classify and quantify changes in the SER disclosures of listed companies over a four-year period (2004–2007). This period of investigation coincides with two contextual events that we consider to be of key relevance to SER in Mauritius. First, a local code of corporate governance was published by the Mauritian National Committee on Corporate Governance (National Committee on Corporate Governance (NCCG), 2004) whereby listed companies were expected to adopt its recommendations in their annual reports from 2005 onwards, including the disclosure of “policies and practices as regards social, ethical, safety, health and environmental issues” (NCCG, 2004, p. 116). The code has explicitly adopted a stakeholder-oriented approach.1 To the best of our knowledge, this was the first explicit and detailed recognition of the need for companies in Mauritius to systematically attend to ‘non-economic’ stakeholders (NCCG, 2004, p. 110) in an otherwise heavily shareholder-focused and ‘private’ business community (Fremond & Gorlick, 2002). Second, political changes in 2005 led to a new agenda aimed at ‘opening up’ the economy. The business sector in Mauritius was traditionally seen to operate as a small and tightly knit group characterized by opaque management and quasi-monopolistic practices with little systematic interest in social action. However, it remains to be fully assessed whether the above changes have led to an increased corporate response in terms of social responsibility activities and/or SER practices. The motivations for and intended contributions of this study are threefold. First, there has been relatively little research on the effects of corporate governance codes in heightening SER practices (Haniffa and Cooke, 2005 and Jamali et al., 2008). Many of the codes that are disseminated worldwide are drawn from the OECD framework, which states that relevant information must be disclosed to all stakeholders (OECD, 2004, p. 22). However, to what extent the concept of the non-economic stakeholder is accepted by local companies in emerging economies has yet to be fully appreciated. Hence, the findings from Mauritius are potentially of relevance to other emerging economies that have adopted corporate governance codes with similar stakeholder accountability implications (Brennan & Solomon, 2008). Furthermore, given the absence of guidance on the form and content of SER in Mauritius, our findings can be of use to managers and non-economic stakeholders (such as civil society organizations) in ascertaining how companies have engaged with the stakeholder requirements of the code. This study can also assist the NCCG in devising or recommending more detailed models of SER to improve corporate social accountability and improve the usefulness of the disclosures. Second, there are claims that legitimacy and/or stakeholder-based studies set in an emerging economy do not sufficiently recognize the social, economic and political factors germane to the country. Haniffa and Cooke (2005, p. 394) argue that this limitation causes SER practices to be evaluated by the norms prevalent in an Anglo-Saxon culture. In our view, this indicates a need to uncover the context in which companies engage with SER. In this regard, De Villiers and Van Staden's (2006) study of environmental disclosures provides a case in point articulating the links between societal expectations (as perceived by corporations) in South Africa and changes in disclosures over time. A related issue is the fact that many studies (see, for example, Amran and Devi, 2008 and Belal, 2001) focus only on one year's data and can only provide a limited picture of how SER is evolving over time. The fact that SER remains by and large a voluntary practice suggests that companies may take time to respond to new forms of social accountability. Third, the ‘fuzziness’ and lack of specificity of the legitimacy perspective (refer to Deegan, 2002, p. 298; Parker, 2005, p. 846; Tilling & Tilt, 2010, p. 57) have led to claims that it has yet to provide a convincing and coherent explanation for corporate SER behavior. In this respect, we are drawn to an analytical framework based on Suchman's (1995) work that, in our view, combines legitimacy and stakeholder management to understand changes in SER practices. The legitimacy and stakeholder perspectives are already seen to be complementary and overlapping in providing a macro (legitimacy) and a micro (stakeholder) framework to explain a firm's specific actions (Cormier et al., 2004, Deegan, 2002, Holder-Webb et al., 2009 and Tilling and Tilt, 2010). The nature of this overlap has not been considered to a great extent. Hence, we aim to develop further insights on the relevance of the legitimacy and stakeholder perspectives in explaining SER patterns in emerging economies. The remainder of the paper is organized as follows. We briefly explain the stakeholder and legitimacy theories and concurrently review relevant empirical evidence. The Mauritian context is then considered, with a particular reference to the code's expectations and how they might influence SER. Third, the methods and data sources are explained. Fourth, the findings are presented and analyzed in light of the selected theoretical perspectives. Finally, we conclude with the contributions and implications of our findings.