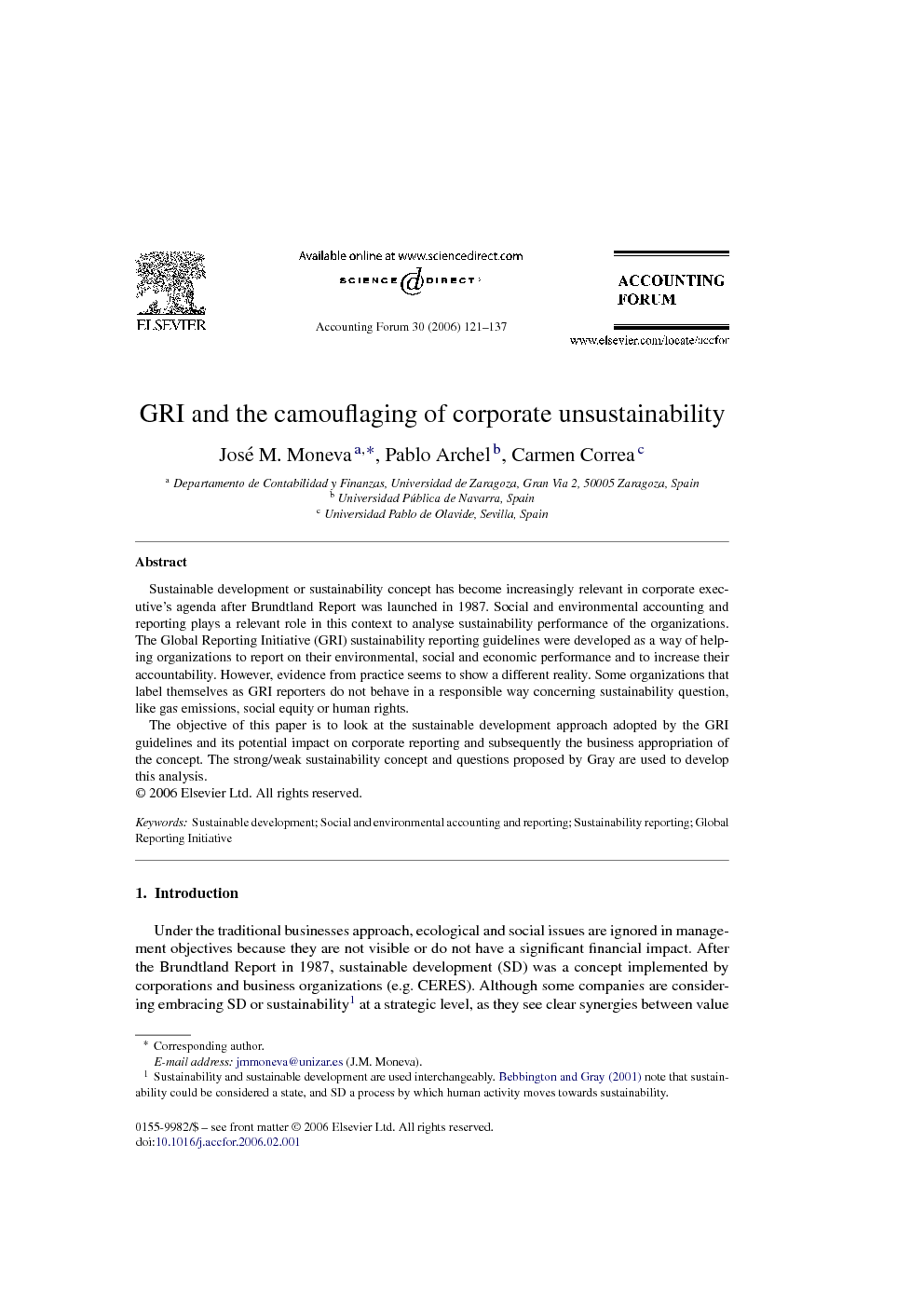 Sustainable development or sustainability concept has become increasingly relevant in corporate executive's agenda after Brundtland Report was launched in 1987. Social and environmental accounting and reporting plays a relevant role in this context to analyse sustainability performance of the organizations. The Global Reporting Initiative (GRI) sustainability reporting guidelines were developed as a way of helping organizations to report on their environmental, social and economic performance and to increase their accountability. However, evidence from practice seems to show a different reality. Some organizations that label themselves as GRI reporters do not behave in a responsible way concerning sustainability question, like gas emissions, social equity or human rights. The objective of this paper is to look at the sustainable development approach adopted by the GRI guidelines and its potential impact on corporate reporting and subsequently the business appropriation of the concept. The strong/weak sustainability concept and questions proposed by Gray are used to develop this analysis.

Under the traditional businesses approach, ecological and social issues are ignored in management objectives because they are not visible or do not have a significant financial impact. After the Brundtland Report in 1987, sustainable development (SD) was a concept implemented by corporations and business organizations (e.g. CERES). Although some companies are considering embracing SD or sustainability1 at a strategic level, as they see clear synergies between value creation and attempts to contribute to SD, the evidence also points to a different reality where this issue “may be marginalized or moved off to agendas unrelated to the firms’ core business” (Dunphy, Griffiths, & Benn, 2003, p. 111). Social and environmental accounting and reporting (SEAR) has been a relevant subject in the academic literature (Gray, Owen, & Adams, 1996). The Triple Bottom Line notion derived from the definition of the sustainable development in the Brundtland Report, has added economic development to SEAR (Elkington, 1999). Under this approach, known as Triple Bottom Line Reporting, the Global Reporting Initiative (GRI) sustainability reporting guidelines were first developed with the aim of assisting “reporting organisations and their stakeholders in articulating and understanding contributions of the reporting organisation to sustainable development” (GRI, 2002, introduction). Preliminary evidence from practice seems to show that these guidelines are used in a biased way. Some organizations that label themselves as GRI reporters do not behave in a responsible way with respect to social equity (for example, health care companies in South Africa) or human rights (for example, some oil companies in developing countries).2 The evidence could be explained as a wrong interpretation (conscious or unconscious) of the concept of SD, or it could be argued that something is failing when transmitting the idea of sustainability from the guidelines. The concept of SD is reduced to simply giving basic information on the indicators that comprise the Triple Bottom Line (TBL), which unfailingly leads to a gap between corporate performance and corporate impacts. Thus, GRI guidelines could be considered as an administrative reform that it is insufficient to enable new accountability relationships (Larrinaga, Moneva, Llena, Carrasco, & Correa, 2002; Owen, Gray, & Bebbington, 1997). The aim of this paper is to look at sustainability within the GRI guidelines and try to find out what is missing (if anything) in the GRI guidelines and consequently, what conception of SD is being constructed and diffused. The first guidelines were published in June 2000 as a pilot document for very few companies. After their analysis and a multi-stakeholder process, a second version was presented at the Johannesburg Summit (August 2002). Many things have changed between the first version of the guidelines and the second—the number of environmental, social and economic indicators, the conceptualization of these indicators and the consideration of integrative indicators. The evolution of the guidelines suggests a concept of SD which appears to fail in the integration of the three pillars (economic, environmental and social). Furthermore, it requires a reflection on the origins of the concept of SD.3 By reviewing the origins of the SD concept and contrasting the latest version of the GRI guidelines (2002) some explanations can be found for a better understanding of the concept. Possible explanations could be tied to the criticism that SD is a vague concept (Atapattu, 2002 and Bebbington, 2001) or to the criticism that the conceptions and the use of the concept of SD are environmentally biased (see Bebbington, 2001; Bebbington & Gray, 2000). However, the shift from the original conception within Agenda 214 – that set a two-part division between the socio-economic and the biophysical spheres – to the current three pillars of sustainable development could provide an explanation of what is going on. This shift as Upton (2002) remarks, can lead to a world where everything is tradable and emptying SD of content by seeking to extend it to everything. In such a disconcerting state of affairs, the concepts of weak and strong sustainability (Bebbington, 2001; Bebbington & Thomson, 1996) suggest essential elements to assess the organizational behaviour and progress towards sustainability. Additionally, these concepts can fit for the practical purpose of making an appraisal of the conceptual position adopted – or elaborated along with the ongoing process of development – by the GRI guidelines concerning SD/sustainability. This article extends prior research, particularly, in two significant ways. First, revisiting the main topics of controversy around SD to get a better understanding of the concept of SD handled in the GRI guidelines. Second, providing some arguments to discuss and interpret the current immobilization related to the integration of the three pillars of sustainability, using the theoretical distinction between administrative and institutional reforms. We proceed as follows. The next section illustrates the controversy around the concept of SD and explores the role that financial accounting can/cannot play in the building process of SD, scrutinizing the contribution of social and environmental reporting for this purpose. The third section addresses the particular case of corporate social reporting (CSR) and the TBL approach adopted in the GRI guidelines. The fourth section assesses the concept of SD/sustainability handled in the GRI guidelines, analysing the conceptual framework of the guidelines and the performance indicators. Finally, we discuss and draw conclusions on the concept of SD/sustainability constructed and developed by the GRI. For illustrative purposes, the paper extracts information from some GRI reporters.

Agreeing with Eden (2000), our argument here is that the understanding of the meaning of sustainable development, the three dimensions/pillars of sustainability (TBL) and their interactions has been changing as the concepts have been analysed, reinvented and operationalized for institutional purposes. The process of the development of the GRI guidelines has meant an opportunity for the different lobbies to further their own (environmental) agendas by appropriating these concepts (Larrinaga & Bebbington, 2001; Owen et al., 1997). More and more companies are adopting the GRI methodology to prepare their sustainability reports but, at the same time, the level of compromise with SD assumptions is low. As a consequence, the guidelines developed by the GRI are used as a new tool for legitimising management decisions and actions (Bebbington et al., 2004). The acceptance of sustainability reports without restrictive conditions such as a clear definition of entity boundaries, the development/requirement of integrated indicators or the attachment of an independent verification statement leads to a relaxation of the basic aim, that is, sustainability. However, some relevant advances with respect to Bebbington's indications (2001) should be highlighted. The current version of the sustainability guidelines has improved the information on the economic aspects of the activity carried out by the reporting organization. The introduction of economic performance indicators based on the value added statement provides a different view of the organization. In any case, in this globalization century, the difficulties inherent in any supranational regulatory process cannot be overlooked. The instruments developed to specify international actions are not as useful as expected, due to the collision with the sovereign claims of the affected countries which are unwilling to accept interferences from supranational institutions in internal affairs (Redclift, 1996) (see, for example, the implementation difficulties of the measures to reduce greenhouse emissions contained in the Kyoto protocol). However, for effective environmental management to be promoted, powerful international organizations have to be involved and their recommendations and guidelines for action have to be coordinated by a generally accepted authority. The GRI has a great international prestige and its reporting model is being used by a considerable number of companies, many of which have been targeted by the most active and critical NGOs. It is not enough to provide a corporate social reporting model and trust that companies will by themselves adopt a responsible attitude. This administrative reform will require the monitoring and recording of data that relates to the extent to which an organization is acting (un)sustainably. This data will form the basis of information for both management and the external participants of the organization who should then be in a position to monitor and assess the organization's progress towards sustainability (Gray, 1996). In our opinion, some changes have to be undertaken in addition to the framework. On one hand, a strong institutional support (reform) to organizations is required in order to avoid biased information and to progressively incorporate stronger sustainable reporting systems, like full cost accounting, into their management models allowing the inclusion of some of the social and environmental externalities in the price of the products (Bebbington et al., 2001).13 Secondly, rules and processes of setting reporting boundaries, including how to disclose them should be defined. In the early years of the reporting, most organizations measured and reported on impacts based on the traditional boundary criteria used in financial reporting, that is, legal, ownership and direct control. But the sustainability context principle of the GRI (2002) encourages companies to report in a broad sense, expanding their reporting boundaries to better reflect the unique “footprint” of their organization and its activities (GRI, 2004). The expansion of the traditional boundaries will permit reporting performance to be closer to the corporate impacts, avoiding reporting practices based on limited sustainable impacts (i.e. licensed manufacturers, contracted suppliers, etc.) Finally, this reporting framework must take on board the concepts of stewardship and accountability (Gray, 1996) in a broad sense (investors, stakeholders, society and future generations). This reporting framework involves a democratic approach which sees accountability in general and sustainability reporting in particular as part of the dialogue between a society and its organizations. The concept of SD that underlies the GRI guidelines for business to approach sustainability reveals some problems: • It runs the risk of losing sight of the big picture for sustainability (globalization, trade, north-south divergence …). • It obscures the acquiring of an integrated view of business sustainability removing the development of integrated indicators as the way forward. • It contributes to perceive the SD concept from a reductionism approach placing the three dimensions of sustainability at the same level and forgetting constituents interaction and participation. • It promotes the construction of a set of indicators instead of instilling business with values to change their mentality so they can subscribe to the assumptions of SD. However, we do not wish to conclude by relaying an apathetic and pessimistic view of the way forward to sustainability. Some arguments can be handled to enlighten the future, such as the construction of the economic pillar. What is more important is not the existence of a separate pillar provided with a set of economic indicators, but the fact that this economic information currently suggested in the GRI guidelines emerges from a shifting process using a traditional accounting measures scheme to a more sophisticated scheme which tends to illustrate the economic relationships and impacts – direct and indirect – that the company has with its stakeholders. To some extent, this is evidence of the integration of the different assumptions embedded in SD.