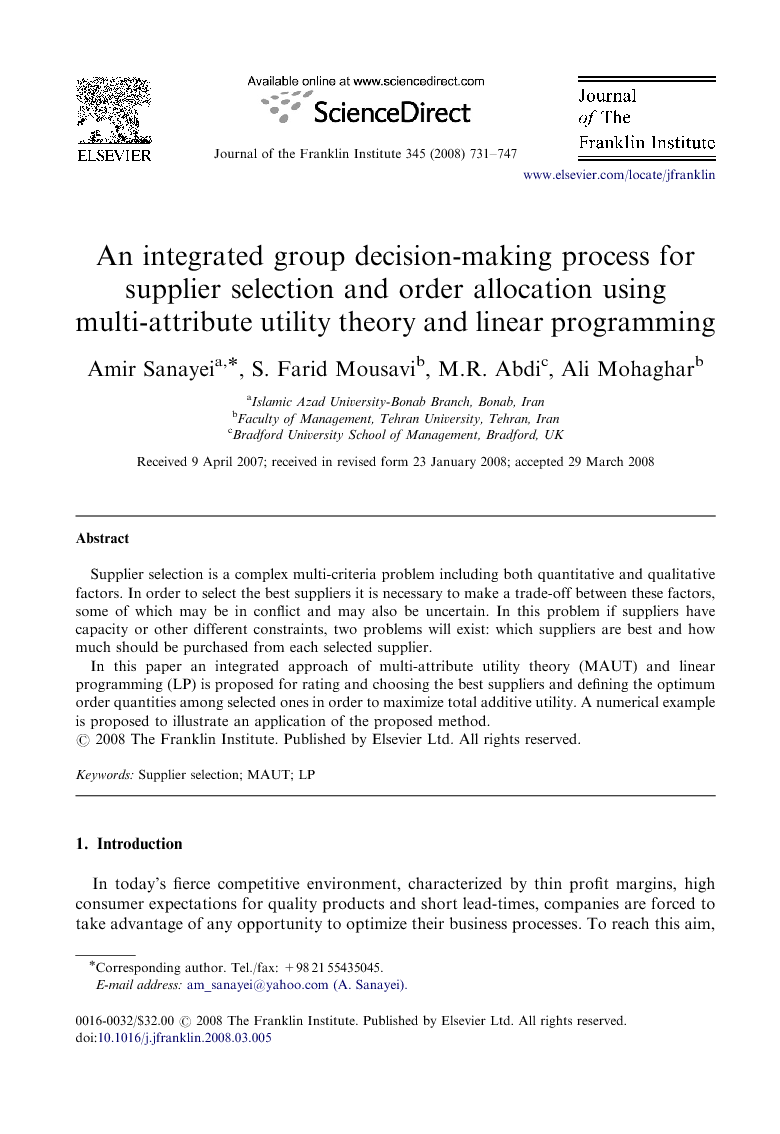 Supplier selection is a complex multi-criteria problem including both quantitative and qualitative factors. In order to select the best suppliers it is necessary to make a trade-off between these factors, some of which may be in conflict and may also be uncertain. In this problem if suppliers have capacity or other different constraints, two problems will exist: which suppliers are best and how much should be purchased from each selected supplier. In this paper an integrated approach of multi-attribute utility theory (MAUT) and linear programming (LP) is proposed for rating and choosing the best suppliers and defining the optimum order quantities among selected ones in order to maximize total additive utility. A numerical example is proposed to illustrate an application of the proposed method.

In today's fierce competitive environment, characterized by thin profit margins, high consumer expectations for quality products and short lead-times, companies are forced to take advantage of any opportunity to optimize their business processes. To reach this aim, academics and practitioners have come to the same conclusion: for a company to remain competitive, it has to work with its supply chain partners and improve the chain's total performance. When the main process in the upstream chain that affects all parts of an organization is considered, the purchasing function emerges as increasingly important. Thus, supply chain management and the supplier (vendor) selection process have received considerable attention in the business-management literature. Supplier selection is a fundamental issue in the supply chain which heavily contributes to the overall supply chain performance. Companies who spend a high percentage of their sales revenue on parts and material supplies, and whose material costs represent a larger portion of total costs, savings from supplies are of particular importance. These situations require more systematic and transparent approach to purchase decision making, especially regarding the area of supplier selection. Carefully selecting the suppliers significantly reduces the purchasing cost and improves corporate competitiveness which is why many experts believe that supplier selection is the most important activity of a purchasing department. Supplier selection is the process by which suppliers are reviewed, evaluated and chosen to become part of the company's supply chain. Several factors affect a supplier's performance. The analysis of such criteria and supplier performance measurement has been the focus of many scientists and purchasing practitioners since the 1960s. As an important work, Dickson [1] presented 23 supplier selection metrics. Dickson's paper has been used as a reference for the majority of the papers dealing with the supplier selection problem. Years afterward, Roa and Kiser [2], Ellram [3], Stamm and Golhar [4] identified 60, 18, and 13 criteria for supplier selection, respectively. However, supplier selection is risky and complicated due to uncertainty and conflict between several quantitative and qualitative factors. Organizations have two approaches to supplier selection. The first approach is to select the best single supplier, which can meet all the requirements (single sourcing). The second approach is to select an appropriate combination of suppliers when no single supplier can satisfy all the requirements. Accordingly, management should split order quantities among the available suppliers for a variety of reasons including creating a constant environment of competitiveness (multiple sourcing). Several methods have been proposed in the literature for single sourcing supplier selection some of which are discussed. One of these methods is data envelopment analysis (DEA), DEA is a mathematical programming (MP) technique that calculates the relative efficiencies (ration of weighted outputs (benefit criteria) to weighted inputs (cost criteria)) of multiple decision-making units. Weber and Ellram [5] primarily discussed DEA usage in supplier selection. Also Liu et al. [6], Forker and Mendez [7] and Saen et al. [8] used DEA for rating and choosing the best supplier. Talluri and Narasimhan [9] stated that methods such as DEA have primarily relied on evaluating vendors based on their strengths and failed to incorporate their weaknesses into the selection process. They also added that such approaches would not be able to effectively differentiate between vendors with comparable strengths but significantly different weaknesses. The analytical hierarchy process (AHP) introduced by Saaty [10], based on pairwise comparison has been applied to supplier selection. Narasimhan [11], Partovi and Banerjee [12], Nydick and Hill [13], Barbarosoglu and Yazac [14], Yahya and Kingsman [15], Masella and Rangoue [16], Tam and Tummda [17], and Lee et al. [18] proposed to use this technique to cope with determining scores. Also, Liu and Hai [19] presented the voting analytical hierarchy process (VAHP), is a novel easier weighing procedure in place of AHPs paired comparison. The analytical network process (ANP), a more sophisticated version of AHP introduced by Saaty (1996) [39], was applied for vendor selection by Sarkis and Talluri [20]. Despite the numerous advantages of these approaches, they have some short-comings. For example they don't effectively take into account risk and uncertainty when assessing the supplier's potential performance because they presume that the relative importance of attributes affecting the supplier's performance is known with certainty [21]. Multi-attribute utility theory (MAUT) has been used in international supplier selection considering one decision maker in a single sourcing environment by Min [21] however the probabilistic nature of supplier performance still remained unanswered. In multiple sourcing, some authors have applied different methods of MP such as linear programming (LP) [22] and [23], mixed integer LP [24], multi-objective programming (MOP) [24] and [25], and goal programming (GP) [26] and [27]. One of the disadvantages of these methods is their failure to consider qualitative factors, making it unclear for managers to analyze them [28]. Hybrid models have also been applied to deal with this problem. Ghodsypour and O’Brien [23] combined AHP and LP in order to take into account tangible and intangible criteria and to optimize order allocation among suppliers. In another article, they proposed a hybrid model based on AHP combined with mixed integer nonlinear programming [24]. Other hybrid techniques have been used for solving supplier selection in multiple sourcing environments and order allocation such as DEA and MOP [29], AHP and GP [27], and AHP and mixed integer MOP [30]. Usually the disadvantages of combined methods affect the effectiveness of hybrid models. Although many models have been proposed to deal with supplier selection problem, the probabilistic nature of the problem, qualitative and quantitative factors and uncertainty involved with it are not considered simultaneously in a multiple sourcing environment. In this paper, an integrated MAUT approach and a LP model are proposed for rating and choosing the best suppliers and indentifying the optimum order quantities among the selected suppliers in order to maximize total additive utility. Furthermore, not only are both qualitative and quantitative factors under risk and uncertainty considered, but the probabilistic nature of supplier performance is taken into account. The remaining sections of the paper are structured as follows: In the section 2, an overview and background of MAUT method is presented. Section 3 will focus on the proposed model. In Section 4, a numerical example is illustrated. Then results are discussed in Section 5. In the final section, some conclusions are drawn from the study.

Supply chain management has recently received considerable attention in business-management literature. Many companies consider a well-designed and implemented supply chain system as an important tool. Supplier selection is a fundamental aspect of supply chain management, which heavily contributes to the overall supply chain performance. Supplier selection is a problem with a more complex nature. The problem is a complex multi-criteria decision problem that includes both qualitative and quantitative factors, which are often assessed with imprecise data and human judgments. It appears that MAUT is well suited to deal with such decision problems. This paper presents an effective model using both MAUT and LP for solving this problem. MAUT determines the supplier's utility from the decision makers’ viewpoints. The LP model is then used to determine the order quantities to be purchased from each supplier to maximize the quantity of purchase from the most desired suppliers. The MAUT and LP the model is rather simple to use and meaningful. The systematic framework for supplier evaluation and selection presented in this paper can easily be extended to analyze other managerial decision-making problems. However, the model would be improved and restructured by considering the existing constraints according to the specific needs and the desirable requirements. In addition, supplementary factors such as discount, lot sizing and logistic costs can be considered as a future research.