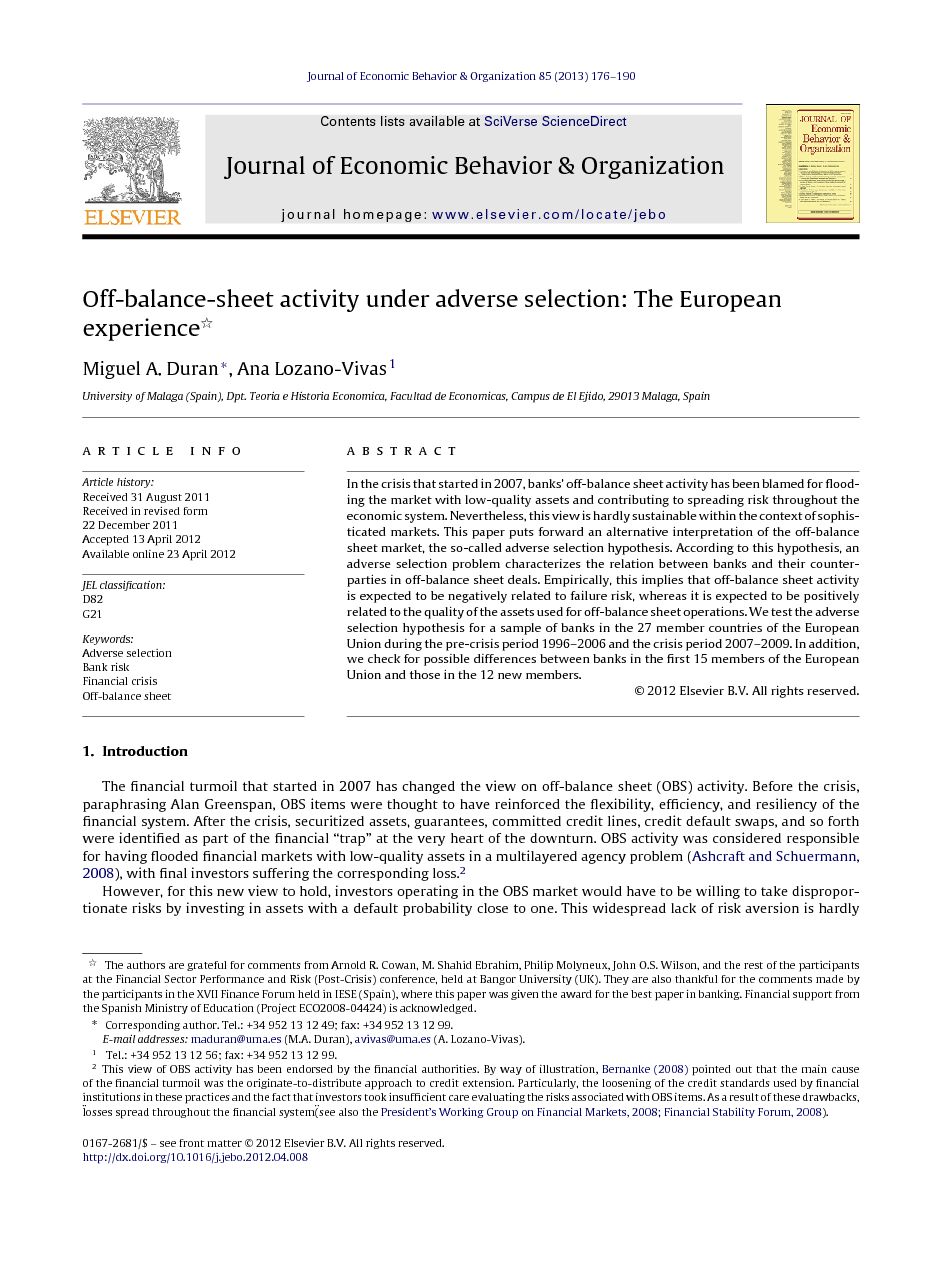 In the crisis that started in 2007, banks’ off-balance sheet activity has been blamed for flooding the market with low-quality assets and contributing to spreading risk throughout the economic system. Nevertheless, this view is hardly sustainable within the context of sophisticated markets. This paper puts forward an alternative interpretation of the off-balance sheet market, the so-called adverse selection hypothesis. According to this hypothesis, an adverse selection problem characterizes the relation between banks and their counterparties in off-balance sheet deals. Empirically, this implies that off-balance sheet activity is expected to be negatively related to failure risk, whereas it is expected to be positively related to the quality of the assets used for off-balance sheet operations. We test the adverse selection hypothesis for a sample of banks in the 27 member countries of the European Union during the pre-crisis period 1996–2006 and the crisis period 2007–2009. In addition, we check for possible differences between banks in the first 15 members of the European Union and those in the 12 new members.

For the adverse selection hypothesis OBS deals are not a means used by banks to get rid of that portion of risk they do not want to hold in their books. These deals are mainly a profit-seeking activity whose target consists of investors who place a high value on relatively safe assets issued by relatively safe institutions. Accordingly, the capacity to engage in OBS activity to a large extent requires, on the one hand, controlling indicators of failure risk. On the other hand, it entails that high-quality assets be used for OBS activity. Thus, banks’ OBS activity is expected to be negatively related to some types of risk (insolvency and portfolio risk) and positively related to other types (liquidity and credit risk). This paper tests these empirical predictions in two separate periods, 1996–2006 and 2007–2009, for the whole EU banking system and two subsamples, EU15 and EU12. Thus, we can check for any differences concerning the adverse selection hypothesis before and during the crisis, and between mature and in-transition economies. For EU and EU15,results support the conclusion that the adverse selection hypothesis is consistent with bank behavior in the OBS market during the pre-crisis and crisis periods. This result is obtained under cross-sectional analysis, using panel data techniques, and subjecting the results to different robustness tests. In an adverse selection problem, the option for quality is a means of avoiding the no-trade result. For the adverse selection hypothesis proposed in this paper, investors’ risk aversion is a self-regulating mechanism that provides incentives for banks to choose that option for quality in the OBS market. Our results suggest that in the two periods studied this option has been predominant in the OBS market of the EU15 banking system. The OBS activity in this banking system seems to have been a cherry-picking practice, with relatively high-quality assets used for the OBS deals. This may have helped reduce the risk f facing a chain of bank failures linked to (intra-European) OBS activity. Moreover, the contagion risk associated with OBS activity may also have been reduced by the fact that the EU15 banks that have been more active in the OBS market score better in insolvency and portfolio risk. Nevertheless, our results for the EU15 subsample also have a negative side. Consistent with Shin (2009), the test of the adverse selection hypothesis suggests that, when the crisis started, EU15 banks that had engaged in OBS activity to a large degree had low-quality assets sitting on their balance sheet. Indeed, those assets remained there during the crisis period. Regarding OBS activity in the EU12 subsample, the market discipline hypothesis—well known in the literature on OBS activity since the beginning of the 1990s—provides a better explanation of bank behavior than the adverse selection hypothesis for the two analyzed periods. This result implies that the banking institutions in new EU members used low-quality assets for OBS deals, thus supporting the association of these deals with “junk” assets.