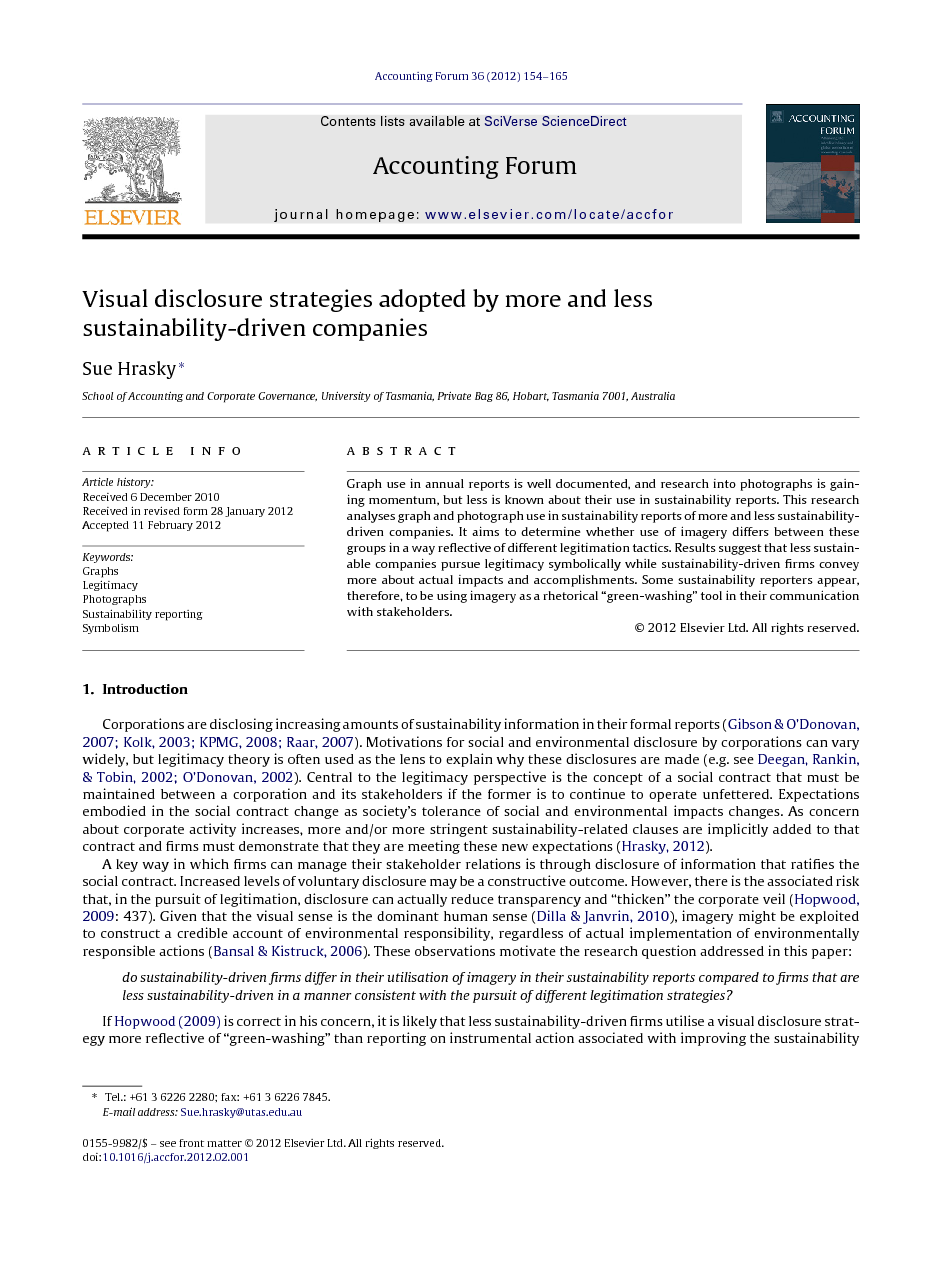 Corporations are disclosing increasing amounts of sustainability information in their formal reports (Gibson and O’Donovan, 2007, Kolk, 2003, KPMG, 2008 and Raar, 2007). Motivations for social and environmental disclosure by corporations can vary widely, but legitimacy theory is often used as the lens to explain why these disclosures are made (e.g. see Deegan et al., 2002 and O’Donovan, 2002). Central to the legitimacy perspective is the concept of a social contract that must be maintained between a corporation and its stakeholders if the former is to continue to operate unfettered. Expectations embodied in the social contract change as society's tolerance of social and environmental impacts changes. As concern about corporate activity increases, more and/or more stringent sustainability-related clauses are implicitly added to that contract and firms must demonstrate that they are meeting these new expectations (Hrasky, 2012). A key way in which firms can manage their stakeholder relations is through disclosure of information that ratifies the social contract. Increased levels of voluntary disclosure may be a constructive outcome. However, there is the associated risk that, in the pursuit of legitimation, disclosure can actually reduce transparency and “thicken” the corporate veil (Hopwood, 2009: 437). Given that the visual sense is the dominant human sense (Dilla & Janvrin, 2010), imagery might be exploited to construct a credible account of environmental responsibility, regardless of actual implementation of environmentally responsible actions (Bansal & Kistruck, 2006). These observations motivate the research question addressed in this paper: do sustainability-driven firms differ in their utilisation of imagery in their sustainability reports compared to firms that are less sustainability-driven in a manner consistent with the pursuit of different legitimation strategies? If Hopwood (2009) is correct in his concern, it is likely that less sustainability-driven firms utilise a visual disclosure strategy more reflective of “green-washing” than reporting on instrumental action associated with improving the sustainability of their operations. Green-washing occurs when disclosure lacks substance (Parguel et al., 2011 and Ramus and Montiel, 2005) presenting an image of apparent environmental responsibility. This apparent transparency and accountability can create a veil that discourages deeper insight about the societal impact of an organisation's activities. Firms may pursue a symbolic approach to disclosure that results in stakeholders making a positive evaluation of the firm's activities that is not consistent with actual operations. To be successful, a symbolic strategy arguably needs to utilise powerful information cues and signals to create the effective veneer of legitimacy that the firm seeks. Visual images are likely to be important here. Both graphs and photographs have been identified as playing a rhetorical impression management role in corporate reporting (e.g. Beattie and Jones, 2008 and Preston et al., 1996). As Davison (2010: 165) notes, despite receiving relatively little attention by accounting researchers, visual images are “heavyweight signs” in business. Rhetorical use of the visual in corporate social responsibility reports, and specifically its potential to create and manipulate meaning, has been documented giving rise to calls for more research into the use of imagery in CSR reporting (Breitbarth et al., 2010, Ihlen, 2011 and Rämö, 2011). In this study the use of graphs and photographs by companies that are sustainability leaders is compared to that of companies that are less sustainability-driven. The expectation is that the former are more likely to adopt a behavioural approach to sustainability issues. This is expected to be communicated in their sustainability reports through relatively greater use of graphs and photographs presenting specific economic, social and environmental information compared to those that are less sustainability-driven. The latter are expected to rely relatively more on photographs that are generally reflective of sustainability themes but which convey very little about actual operations, reflecting a more symbolic approach to the pursuit of legitimacy. The remainder of the paper is structured as follows: the next section contains a discussion of sustainability reporting, legitimation and disclosure followed in Section 3 by a brief overview of the literature concerning visual images, specifically graphs and photographs, in corporate communication. This provides the basis from which hypotheses are developed in Section 4. The method used to test these hypotheses is detailed in Section 5, followed by presentation and discussion of the results in Section 6. Their implications are considered in Section 7.

The results are consistent with different legitimation tactics being adopted by firms with differences in their sustainability practices. While all firms have a need for legitimation and therefore to be perceived as operating in a responsible manner regarding the sustainability of their operations, it appears that some firms attempt to gain the necessary legitimacy through symbolism to achieve pragmatic legitimacy rather than action that necessarily underpins moral legitimation. This is done by exploiting the arguably powerful visual rhetoric associated with photographic images to present a report that portrays a responsible corporate citizen while relying less on graphs as a similar persuasive form of disclosure to report on actual outcomes and accomplishments. Significantly it was the less sustainable group of companies that tend to adopt this type of visual disclosure strategy. It appears then that the less sustainable group pursue a pragmatic legitimation strategy that might relies on green-washing to create the appearance of legitimacy when in fact their actual operations may not accord with societal expectations to the extent that society actually judges that they do. If this is so, then Hopwood's (2009) fears about thickening of the corporate veil are pertinent. If such strategies are effective and these firms manage both to maintain legitimacy and to avoid closer scrutiny, a regulatory response may be needed. At the very least, there may need to be an educative process for users of sustainability reports to assist them to become more sophisticated consumers of the information disclosures provided therein. The more sustainable firms appear to seek moral legitimacy and therefore rely on graphs more to convey quantitative data that is likely to be more reflective of underlying operations and their impacts. That said, this group used a similar number and size of photographs as did the less sustainable groups, possibly to play an attention directing role, and this is a somewhat disturbing tendency. Companies that are more sustainable are still producing hardcopy reports that contain high quality glossy photographs, resulting in a report with a larger “footprint” that needs to be the case. Isomorphic pressures might be responsible with the more sustainable firms needing to match the disclosure patterns of their less sustainable counterparts in order not to be misjudged about their claim to sustainability. Perhaps specific incentives need to be in place to encourage the production of leaner but informative reports that will not be misevaluated by users. Agencies which produce reporting guidelines may have a role here as may bodies providing awards for reporting excellence, along with interest groups who lobby for improvements in sustainable business practices. The results, of course, need to be evaluated in light of the limitations associated with the research. The sample size was small and was drawn from one jurisdiction. Index membership or non-membership was used to proxy for more and less sustainable firms without additional confirmation of the appropriateness of this proxy. Other variables that may also influence sustainability reporting practices have not been considered. Further research could address these issues and also delve more deeply into how graphs and images are constructed and presented in sustainability reports. A useful focus, and one that has been extensively investigated in annual reports, is the use of impression management tactics in disclosure strategies in sustainability reports. As well as the issue of measurement distortion in graphs investigated by Jones (2011), research could, for example, focus on such aspects as placement and positioning of imagery, its captioning and emphasis, and the interplay between images, narrative and numbers. Extensions in these areas would facilitate a better and more holistic understanding of how the sustainability impression is created in pursuit of both pragmatic and moral legitimacy and further guide educative and regulatory strategies.