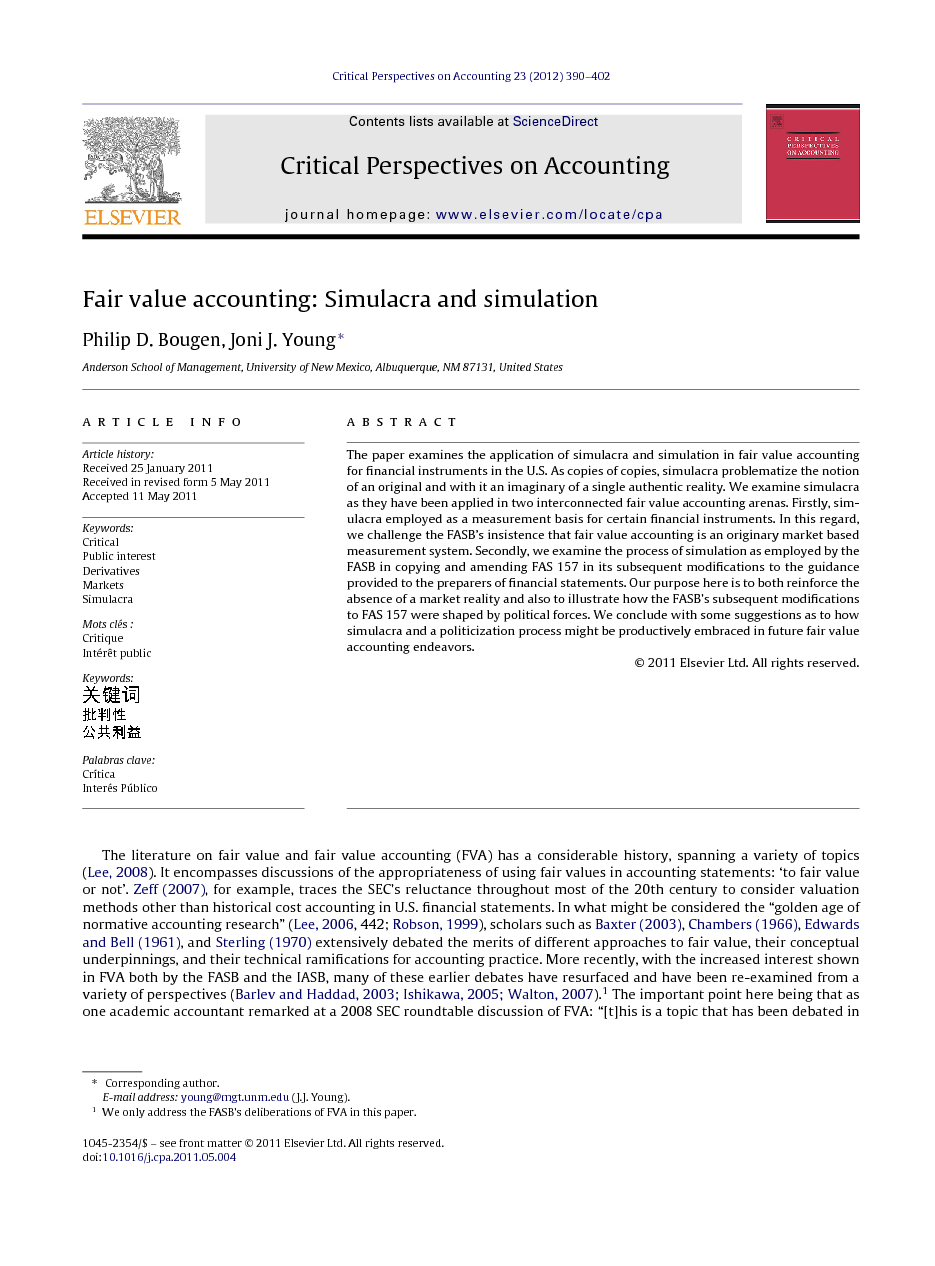 The paper examines the application of simulacra and simulation in fair value accounting for financial instruments in the U.S. As copies of copies, simulacra problematize the notion of an original and with it an imaginary of a single authentic reality. We examine simulacra as they have been applied in two interconnected fair value accounting arenas. Firstly, simulacra employed as a measurement basis for certain financial instruments. In this regard, we challenge the FASB's insistence that fair value accounting is an originary market based measurement system. Secondly, we examine the process of simulation as employed by the FASB in copying and amending FAS 157 in its subsequent modifications to the guidance provided to the preparers of financial statements. Our purpose here is to both reinforce the absence of a market reality and also to illustrate how the FASB's subsequent modifications to FAS 157 were shaped by political forces. We conclude with some suggestions as to how simulacra and a politicization process might be productively embraced in future fair value accounting endeavors.

The literature on fair value and fair value accounting (FVA) has a considerable history, spanning a variety of topics (Lee, 2008). It encompasses discussions of the appropriateness of using fair values in accounting statements: ‘to fair value or not’. Zeff (2007), for example, traces the SEC's reluctance throughout most of the 20th century to consider valuation methods other than historical cost accounting in U.S. financial statements. In what might be considered the “golden age of normative accounting research” (Lee, 2006, 442; Robson, 1999), scholars such as Baxter (2003), Chambers (1966), Edwards and Bell (1961), and Sterling (1970) extensively debated the merits of different approaches to fair value, their conceptual underpinnings, and their technical ramifications for accounting practice. More recently, with the increased interest shown in FVA both by the FASB and the IASB, many of these earlier debates have resurfaced and have been re-examined from a variety of perspectives (Barlev and Haddad, 2003, Ishikawa, 2005 and Walton, 2007).1 The important point here being that as one academic accountant remarked at a 2008 SEC roundtable discussion of FVA: “[t]his is a topic that has been debated in the accounting profession and the academic literature for five decades and you have 90 days to sort that out” (Ball, 2008: 12). And we would add, the debate is set to continue. Other discussions have also appeared seeking to locate FVA within a framework sensitive to contemporary priorities: in particular, contemporary financial markets and financial instruments. In this regard, Benston (2008: 102) worries about the ‘manipulability’ of FVA, Ronen (2008: 186) about ‘hazardous’ measures, Bromwich (2007: 4) about ‘a panoply of additional assumptions’ and Whittington (2010: 104) about ‘an idealized view of markets’. Referred to here is the recognition that contemporary financial markets and many instruments pose distinct problems for FVA. In this regard, of particular interest is FVA as it relates to financial derivatives in the current financial crisis. Attention has been drawn to the imaginary properties of FVA in this context. Bromwich (2007) and Benston (2008) refer to ‘imaginary prices’, and Power (2009) to ‘imaginary markets’. The imagination and re-imagination of fair values is a central theme in our paper. We believe that the paper adds to these discussions, although from a different perspective and reaching different conclusions. Stated succinctly, imaginary prices and markets need not necessarily be viewed in disapproving terms: what is imagined, by whom and for what purposes is important in this regard. Our interest in an imaginary or, more specifically, how reality might be imagined and re-imagined, will become more apparent during the course of the paper and in our subsequent discussion of what we refer to as ‘realer than the real’. FAS 157, Fair Value Measurements, and its subsequent amplifications and amendments while not explicitly articulated in terms of an imaginary make oblique reference to the invention of measurements.2 FAS 157 proposes the use of what it terms Level 3 inputs, or unobservable inputs, for the valuation of certain assets and liabilities, with modifications to the standard specifically addressing issues regarding the valuation of complex financial instruments during the financial crisis. The sheer volume of these instruments should be noted. It has been estimated by the Bank for International Settlements (2009) that as of December 2008, the market value of ‘over the counter’ (OTC) derivatives including credit default swaps amounted to approximately $33,889 billion. We consider why, how and with what ramifications accounting imaginaries have intersected with these instruments. We also make some proposals as to possible alternative arrangements for future intersections. In the next section, we outline some conceptual tools which help us unpack and bring into clearer focus the idea of imaginaries and their relationships with accounting numbers. We then provide an overview of FAS 157 focusing specifically upon recommended measurement criteria. The subsequent three sections constitute the empirical terrain of the paper as we consider the content and trajectory of modifications to the standard, or what we consider to be the creation of simulacra within accounting imaginaries. We conclude the paper with our discussion of ‘realer than the real’ and with it some implications for FVA.