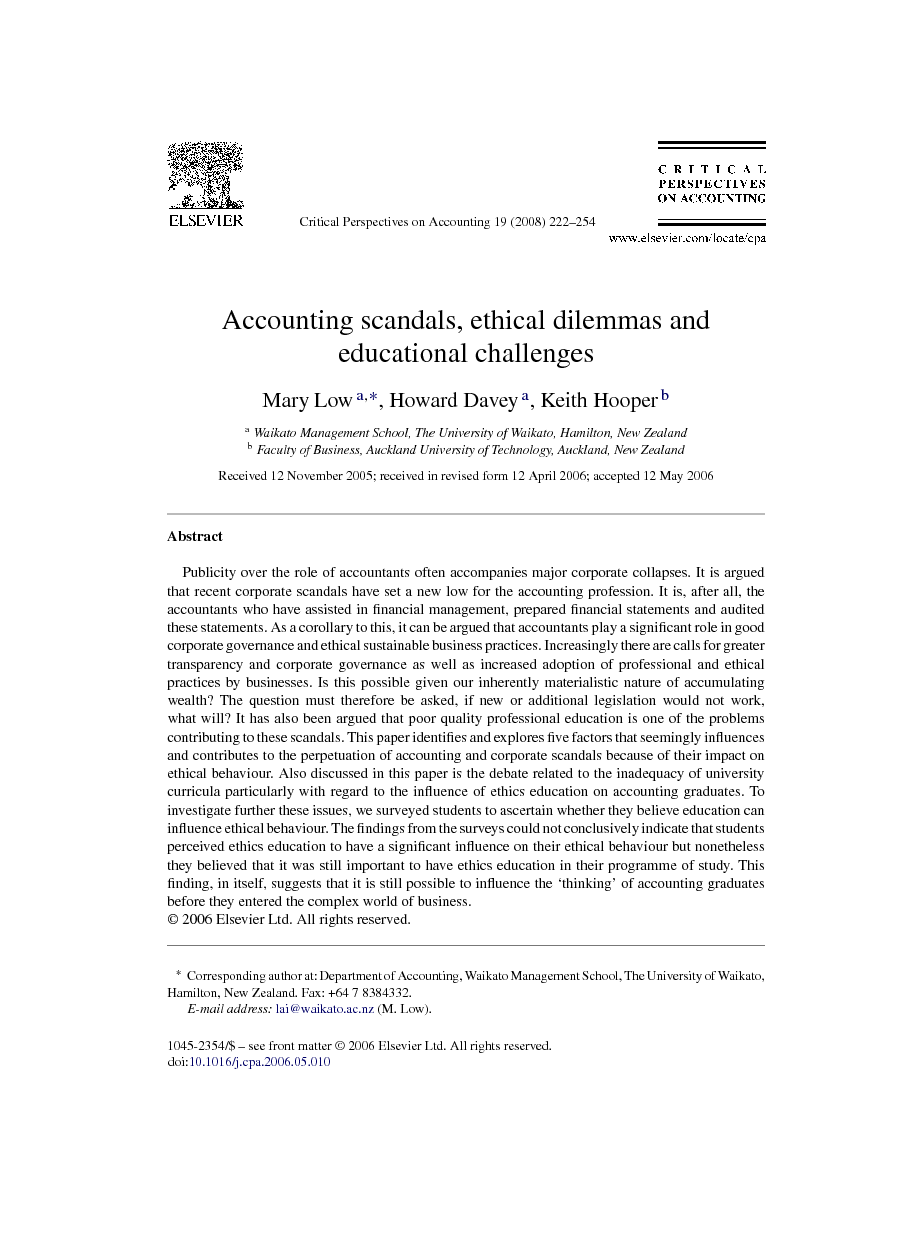 Publicity over the role of accountants often accompanies major corporate collapses. It is argued that recent corporate scandals have set a new low for the accounting profession. It is, after all, the accountants who have assisted in financial management, prepared financial statements and audited these statements. As a corollary to this, it can be argued that accountants play a significant role in good corporate governance and ethical sustainable business practices. Increasingly there are calls for greater transparency and corporate governance as well as increased adoption of professional and ethical practices by businesses. Is this possible given our inherently materialistic nature of accumulating wealth? The question must therefore be asked, if new or additional legislation would not work, what will? It has also been argued that poor quality professional education is one of the problems contributing to these scandals. This paper identifies and explores five factors that seemingly influences and contributes to the perpetuation of accounting and corporate scandals because of their impact on ethical behaviour. Also discussed in this paper is the debate related to the inadequacy of university curricula particularly with regard to the influence of ethics education on accounting graduates. To investigate further these issues, we surveyed students to ascertain whether they believe education can influence ethical behaviour. The findings from the surveys could not conclusively indicate that students perceived ethics education to have a significant influence on their ethical behaviour but nonetheless they believed that it was still important to have ethics education in their programme of study. This finding, in itself, suggests that it is still possible to influence the ‘thinking’ of accounting graduates before they entered the complex world of business.

This paper explores the issue of corporate values and behaviour in relation to corporate transparency, the money culture, vices of a capitalistic society and the legalistic culture that prevails in our society in an attempt to provide some insights as to why we continue to have corporate and accounting scandals. It would appear that the calls for reforms to accounting and financial reporting standards will not address the underlying questions of why we continue to have such scandals. We live in a world that is dominated by money and legalistic cultures. Corporate values, behaviour and the vices of capitalism contribute to the persistence of scandals. The question is whether we can look to accounting and business education to make a difference. The nature versus nurture debate is unresolved. Our survey of students shows, most believe education can only have a moderate influence. To make the most of what our students consider to be of moderate influence, we need to provide an educational curriculum in accounting that is integrated with an ethics coverage that will influence our graduates’ thinking. It is their thinking which is important. Accounting educators cannot necessarily expect to instil mind altering beliefs in young adults, in the way that Jesuit educators once did when they proclaimed, “Give me the child until he is five and I will give you the man.” What can be done is to integrate ethics into accounting processes to show how different technical treatments may have different consequences which may entrain longer term ethical ramifications. The first survey indicated that students believed they were ethically superior to their peers in terms of how they perceived their peers would act in an ethically compromising situation. The rational paradox that these questions and their answers exposed showed much of what is wrong: short terminism and the desire to be seen immediately in the best possible light. Another paradox was exposed in the second survey which revealed that, while students perceived ethics education coverage in their programme of study as important, the majority only saw ethics education as having a moderate influence on their ethical behaviour. Making the most of a moderate influence is, therefore, vital. Ethics as a subject set aside from accounting courses is, we argue, as useful as the profession's code of ethics published but set aside from the main business of accounting standards. A stand-alone course on ethics may be useful to philosophy students but accounting students tend to be more vocationally focused, as are many of their educators. The latter pose a problem. The ability to integrate ethics smoothly into accounting teaching requires thought and the development of new pedagogical skills. The downside is that ethics might be treated by educators as a stand-alone topic within courses, which would defeat attempts at seamless integration. Technical education and technical competence are important but, without an education directed with thought to the consequences of accounting treatments which prefer a short term advantage, the latter may well have more appeal. Educating technically proficient but shallow graduates does a disservice to society. As a previous president, Theodore Roosevelt of the United States of America states: “To educate a person in mind and not in morals is to educate a menace to society”.