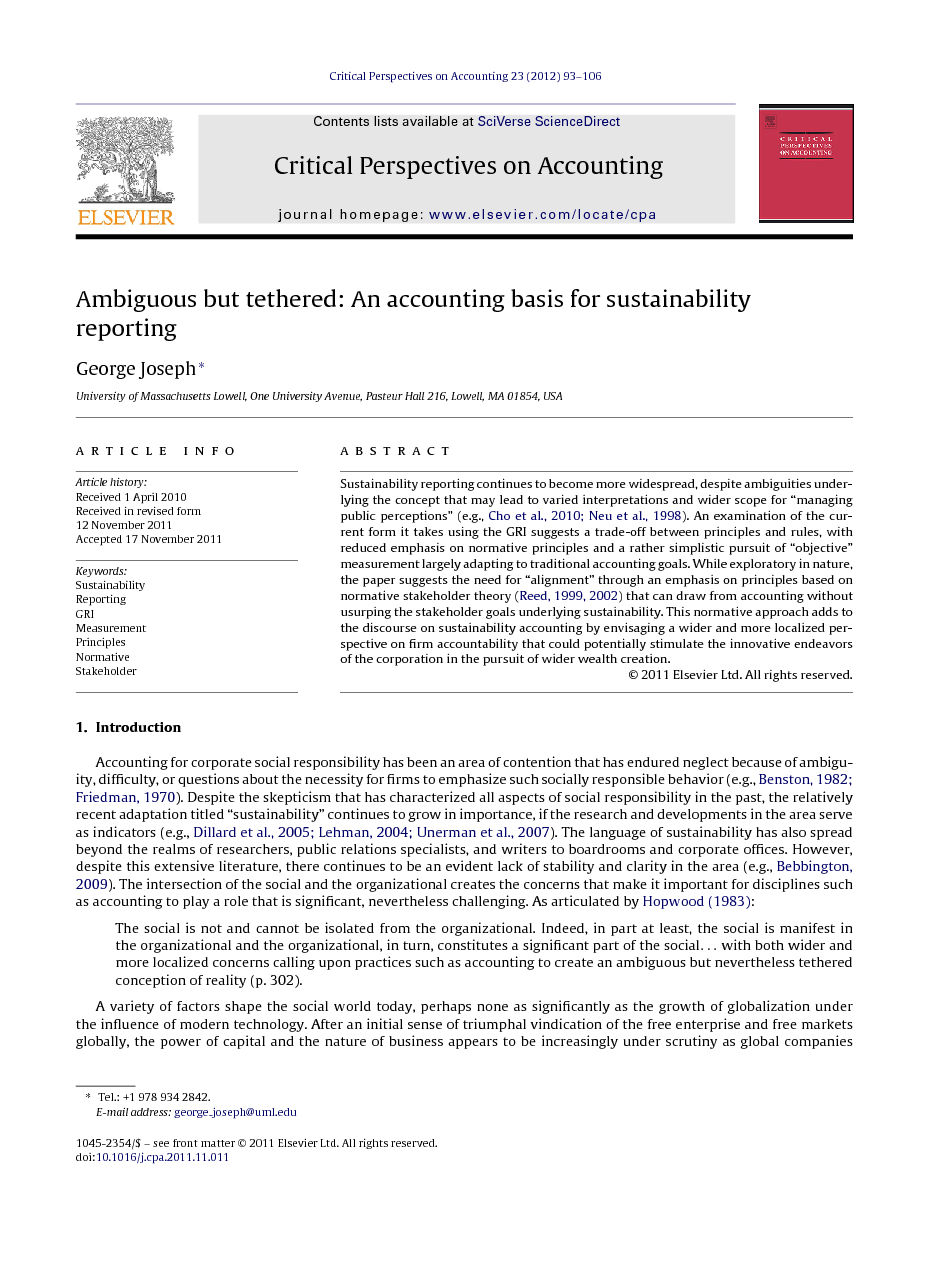 Sustainability reporting continues to become more widespread, despite ambiguities underlying the concept that may lead to varied interpretations and wider scope for “managing public perceptions” (e.g., Cho et al., 2010 and Neu et al., 1998). An examination of the current form it takes using the GRI suggests a trade-off between principles and rules, with reduced emphasis on normative principles and a rather simplistic pursuit of “objective” measurement largely adapting to traditional accounting goals. While exploratory in nature, the paper suggests the need for “alignment” through an emphasis on principles based on normative stakeholder theory (Reed, 1999 and Reed, 2002) that can draw from accounting without usurping the stakeholder goals underlying sustainability. This normative approach adds to the discourse on sustainability accounting by envisaging a wider and more localized perspective on firm accountability that could potentially stimulate the innovative endeavors of the corporation in the pursuit of wider wealth creation.

As the analysis above indicates, the GRI has made inroads into defining and promoting sustainability from a multi-stakeholder perspective. However, despite the elaborate preamble that holds promise for a revised view of sustainability, the outcome gravitates to a familiar version that makes objectivity from measurement an overwhelming focus, largely avoiding the ambiguity and conflict underlying sustainability, and allowing for the “business case” approach to sustainability which is no sustainability (Gray, 2010). The need for a reformation of capitalism that is built on a purely profit motive is at the core of sustainability, if business is to consider the responsibilities of operating in a multi-stakeholder environment from the normative perspective. Such reformation must be distinguished from the adaptation that capital has been adept at, often using a “public interest” canopy to disguise the true motives that hinge on a self-centered profit-orientation. The idea of the continuity of the firm in the context of “legal entity” is often at odds with the short- term perspectives of those who reside “behind the veil.” The challenge then lies in motivating “goal congruence” between the identity of the corporation as one in perpetuity, and its role in society that considers inter-generational equity in the spheres of economic, social and environment. This paper asserts that an inherent tension between the firm's goals of profit and the normative stakeholder perspective that views the goals of stakeholders as ends in themselves results in much of the ambiguity underlying sustainability. Further, the paper postulates that a principle-based approach, in contrast to the rule-based approach has the potential to bridge this gap such that the goals of a normative stakeholder perspective are aligned with that of the firm, where interests of stakeholders are not subsumed within the corporate pursuit of profit. Fundamental to this effort is clarity in understanding the nature of sustainability, with the wider and more localized views that help organizations see the issues not as leading to inevitable conflict, but rather as prioritization based on principles, leading to an increased transparency that leaves fewer avenues for “adaptations” to continue the status quo. While the larger content of the paper addressed the issues surrounding the substance of normative sustainability, accounting concepts provides the objectivity to such a system through meaningful measures, stakeholder engagement and governance processes that can be legitimately regulated and implemented. It is through this “tether” that normative sustainability, with the inherent ambiguities that could well gravitate to a tool for “impression management” goals of the firm, may be integrated into a component of business reporting where such firm achievements may be more objectively viewed from the perspective of social wealth creation. As has been emphasized, sustainability in a competitive environment driven by the profit motive exists on tenuous ground. While the discussions above are based on the premise of voluntarism and the general impression that firms may seek to increase legitimacy and emulate leaders in social responsibility when the guidelines are clearly set, such self-motivation may not occur naturally or become widespread without external stimulation. Specifically, while long-term benefits from sustainability may appear significant from a rational systemic perspective, short- term costs tend to be an impediment to the pursuit of that alternative. In fact, firms may not see the benefits or consider the benefits as sufficiently warranting the costs involved. Porter and van der Linde (1995) assert that “organizational inertia” may keep organizations from voluntarily adapting environmental sustainability goals. Further, Owen et al. (2001) in contrast, see the power differentials between firms and economically weak stakeholders as another factor that may restrict change. Thus, change may require harnessing external factors in addition to the internal voluntarism to bring about the necessary cohesion to bear on the implementation of sustainability necessary for any form of reformation of capitalism. Hopwood (1983), for example, point out that “wider social agencies, including those of the State, media and the professional institutions of the accounting craft” could “play a significant role in establishing a view of both the prevailing technical state of the accounting art and those of managerial practices which are regarded as legitimate and in order” (p. 301). Thus, while some form of regulation helps initiate implementation of sustainability on a wider scale, the inclusion of increased education and communication through the professional agencies adds another important element to aid in implementation, particularly in enabling NGOs and other stakeholders to understand and express the rationale of the sustainability framework that could drive motivation for change. To conclude, sustainability reporting, with the emphasis on voluntarism, is in a transition stage. Several factors could influence the outcomes as has been enumerated above. The premise of this paper is that alignment of accounting from a principles-based perspective can bring about deeper introspection and possible transparency in the internal workings of firms that may lead to individual firms increasing their sustainability endeavors with more effective and equitable outcomes. However, given that current forms of corporate behavior lie deeply entrenched, many would remain unconvinced and skeptical about outcomes. This paper postulates that continued debate and understanding of underlying issues are necessary for initiating change. Perhaps crucial to these endeavors is the retention of the most appealing of capitalism's traits, creativity and innovation, which when directed to increasing the congruence between social and business goals, could lead to greater optimism. In sum, where different disciplines and worldviews converge, this paper stands as another perspective among many to speak on a subject so nebulous, yet so critical for our times.