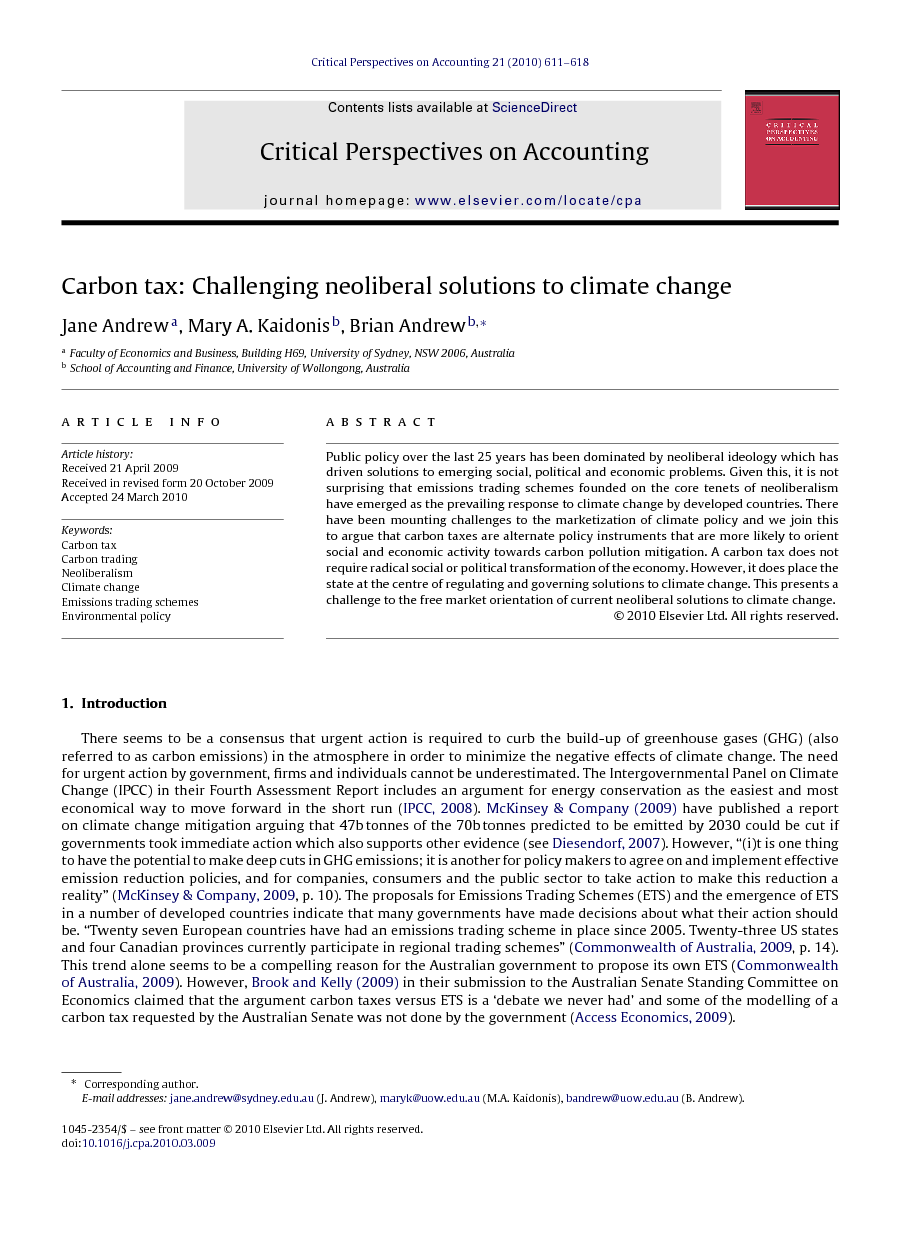 Public policy over the last 25 years has been dominated by neoliberal ideology which has driven solutions to emerging social, political and economic problems. Given this, it is not surprising that emissions trading schemes founded on the core tenets of neoliberalism have emerged as the prevailing response to climate change by developed countries. There have been mounting challenges to the marketization of climate policy and we join this to argue that carbon taxes are alternate policy instruments that are more likely to orient social and economic activity towards carbon pollution mitigation. A carbon tax does not require radical social or political transformation of the economy. However, it does place the state at the centre of regulating and governing solutions to climate change. This presents a challenge to the free market orientation of current neoliberal solutions to climate change.

In this paper, we argue that neoliberal ideology has come to dominate environmental policy, and this ideology is reinforced in emerging ETS or carbon markets. The choice of ETS, given the extensive evidence that an ETS does not work well to deliver environmental benefits, is difficult to understand without invoking the role of neoliberal ideology. Further, there is little evidence to support the idea that an ETS is superior to a tax-based approach to carbon abatement, given the reliance on government to establish infrastructure for ETS or carbon trading. The inclusion of tax as a central feature of public policy directly challenges the neoliberal ideology which favors small government, lower taxes and the facilitation of free market management of emerging social or environmental problems. The introduction of a new tax is often seen as a problem for any government, though an ETS with permits sold by government is a de facto tax and this is likely to be easier to promote in the current ideological context than an actual new tax. Tax policy acknowledges the role of market economics; yet it has not been featured in the recent public policy debate as a viable alternative to an ETS. Taxing of carbon pollution is an approach that makes different assumptions about the role of regulators and it enables cooperatively planned investment in the social, environmental and economic future of a nation (Beder, 2008a). An environmentally sustainable path must challenge the foregrounding of growth oriented markets in all social and environmental policy (Beder, 2002a, Beder, 2002b, Beder, 2002c and Latouche, 2005, referred to by Fournier, 2008). This enables us to challenge economic thinking which involves ‘colonizing our imagination’ and encourages us to challenge new institutional arrangements that seek to ‘sustain the unsustainable’ (Fournier, 2008, p. 529), since under a carbon tax the locus of discretion is perceived to be with the government and this is the antithesis of neoliberal ideology.