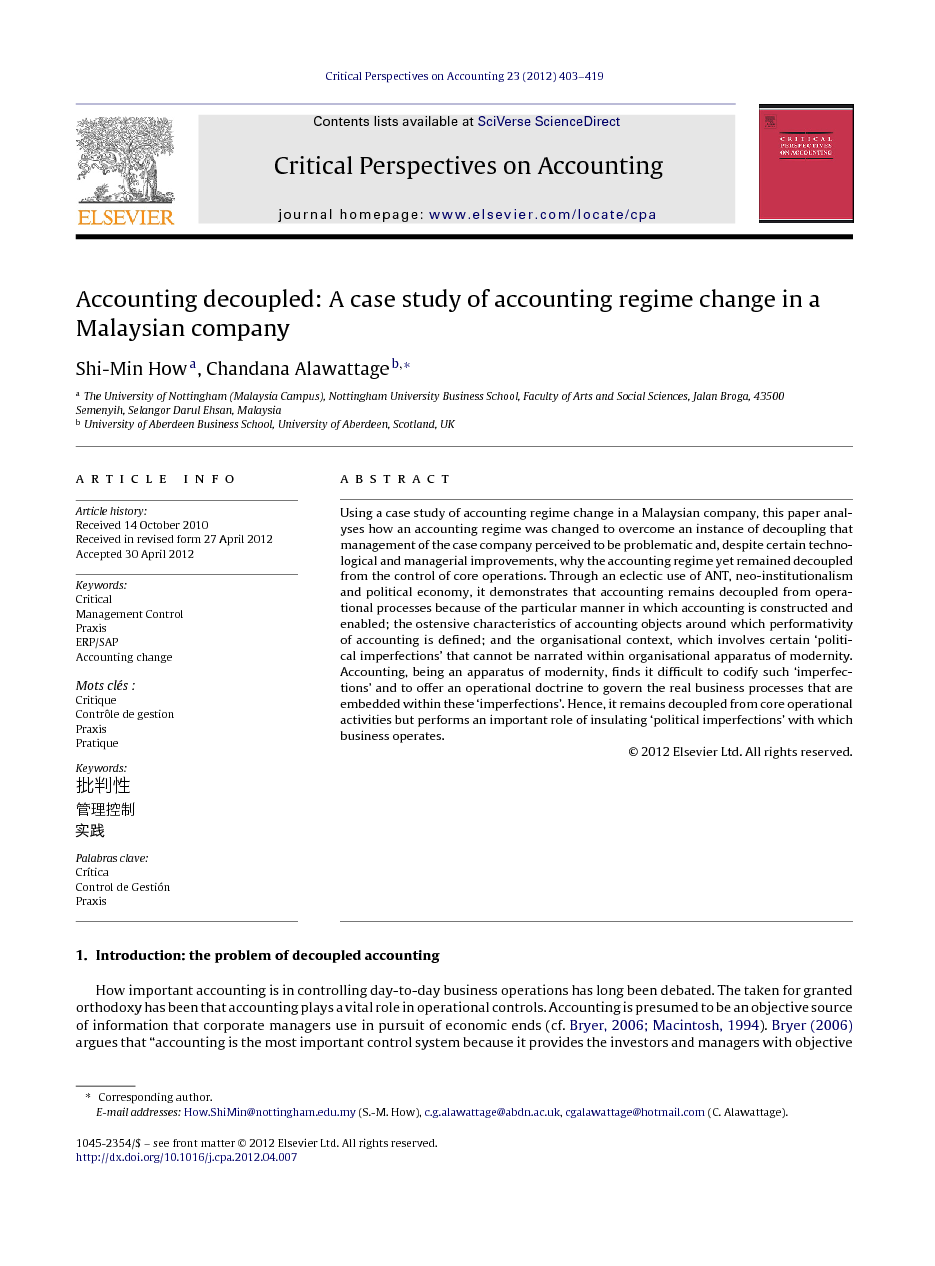 Using a case study of accounting regime change in a Malaysian company, this paper analyses how an accounting regime was changed to overcome an instance of decoupling that management of the case company perceived to be problematic and, despite certain technological and managerial improvements, why the accounting regime yet remained decoupled from the control of core operations. Through an eclectic use of ANT, neo-institutionalism and political economy, it demonstrates that accounting remains decoupled from operational processes because of the particular manner in which accounting is constructed and enabled; the ostensive characteristics of accounting objects around which performativity of accounting is defined; and the organisational context, which involves certain ‘political imperfections’ that cannot be narrated within organisational apparatus of modernity. Accounting, being an apparatus of modernity, finds it difficult to codify such ‘imperfections’ and to offer an operational doctrine to govern the real business processes that are embedded within these ‘imperfections’. Hence, it remains decoupled from core operational activities but performs an important role of insulating ‘political imperfections’ with which business operates.

For smooth functioning, this shadow system demands a certain degree of operational independence, distance and secrecy from the organisational formalities. So, decoupling it from the politically capitalised and patronised operational core, accounting is attributed an important role of managing the communicative interface between the company and the state camouflaging the ‘imperfections’ with which business operates. So, accounting classification of expenses often become the hiding grounds for various political payments. Accounting is important and performs the function of legitimating the existence of the company as a ‘modern’ institution. As such, accounting becomes the medium through which a modernity is imputed to the corporate entity to legitimise its existence as a limited liability company; a corporate personality that is vital to the interactions with the formal protocols of the political state. SAP never redefined this external communicative role of accounting, but just reinforced and enhanced it. Accounting categories simply provided an ‘official’ space within which ‘political imperfections’ of the business could be camouflaged. In other words, due to the ostensive characteristics of accounting (with or without SAP) that frame performativity of the accounting actor network, this actor-network never had a chance to infiltrate the non-accounting actor-worlds as an operational doctrine. Instead, it has always been confined to a fairly important role: ‘shadowing’ the political and patronage processes behind business's ‘official’ interface. As such, FD's functional expectation of panoptic visibility of branch activities through SAP runs contradiction to an operational necessity of decoupling and camouflaging from ‘official’ communication that accounting would do. Decoupling has always been an operational necessity imposed by the ‘political imperfections’ of the way the Malaysian businesses (like many other LDCs) are supposed to operate and panoptic dreams associated with SAP and other modern accounting packages can hardly be realised within such non-modern conditions