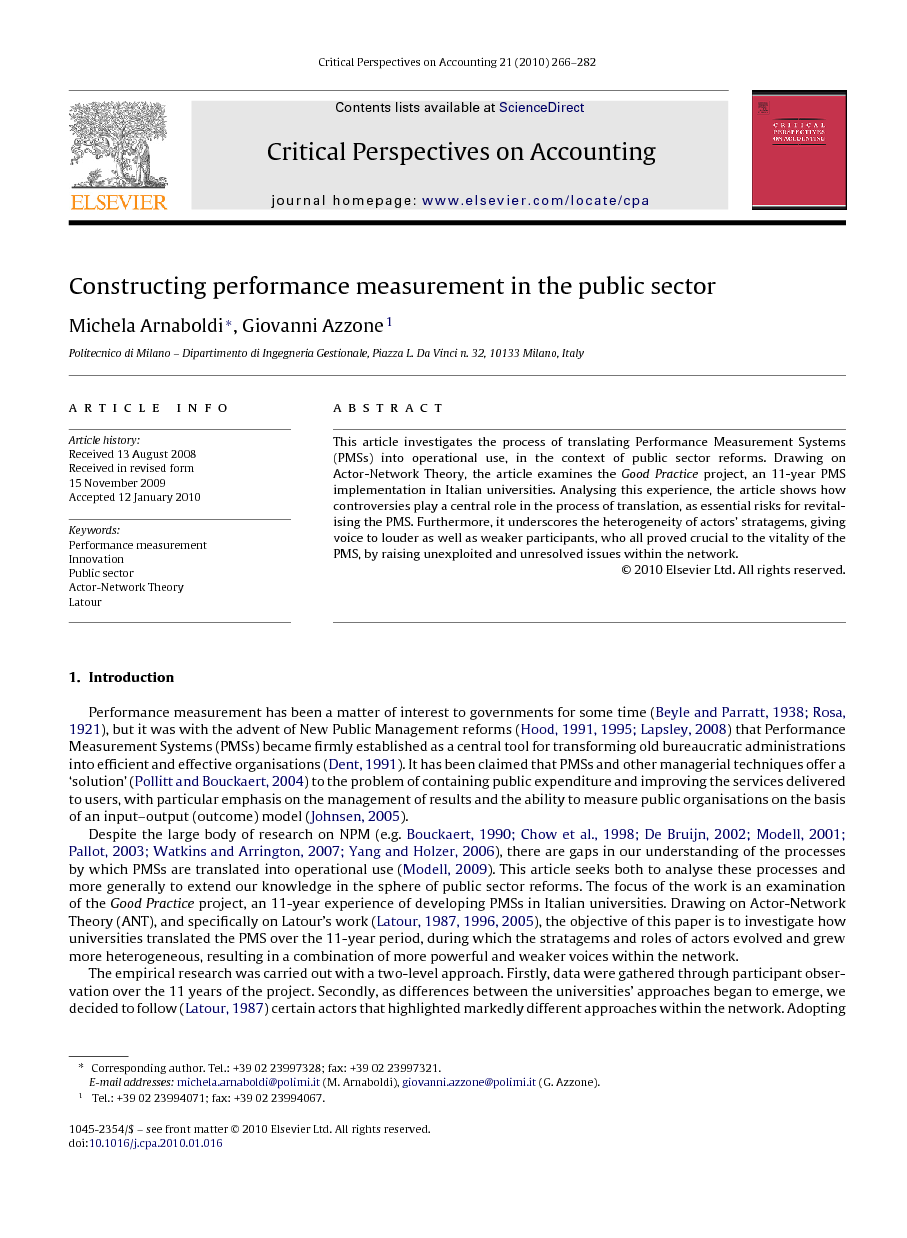 This article investigates the process of translating Performance Measurement Systems (PMSs) into operational use, in the context of public sector reforms. Drawing on Actor-Network Theory, the article examines the Good Practice project, an 11-year PMS implementation in Italian universities. Analysing this experience, the article shows how controversies play a central role in the process of translation, as essential risks for revitalising the PMS. Furthermore, it underscores the heterogeneity of actors’ stratagems, giving voice to louder as well as weaker participants, who all proved crucial to the vitality of the PMS, by raising unexploited and unresolved issues within the network.

Performance measurement has been a matter of interest to governments for some time (Beyle and Parratt, 1938 and Rosa, 1921), but it was with the advent of New Public Management reforms (Hood, 1991, Hood, 1995 and Lapsley, 2008) that Performance Measurement Systems (PMSs) became firmly established as a central tool for transforming old bureaucratic administrations into efficient and effective organisations (Dent, 1991). It has been claimed that PMSs and other managerial techniques offer a ‘solution’ (Pollitt and Bouckaert, 2004) to the problem of containing public expenditure and improving the services delivered to users, with particular emphasis on the management of results and the ability to measure public organisations on the basis of an input–output (outcome) model (Johnsen, 2005). Despite the large body of research on NPM (e.g. Bouckaert, 1990, Chow et al., 1998, De Bruijn, 2002, Modell, 2001, Pallot, 2003, Watkins and Arrington, 2007 and Yang and Holzer, 2006), there are gaps in our understanding of the processes by which PMSs are translated into operational use (Modell, 2009). This article seeks both to analyse these processes and more generally to extend our knowledge in the sphere of public sector reforms. The focus of the work is an examination of the Good Practice project, an 11-year experience of developing PMSs in Italian universities. Drawing on Actor-Network Theory (ANT), and specifically on Latour's work ( Latour, 1987, Latour, 1996 and Latour, 2005), the objective of this paper is to investigate how universities translated the PMS over the 11-year period, during which the stratagems and roles of actors evolved and grew more heterogeneous, resulting in a combination of more powerful and weaker voices within the network. The empirical research was carried out with a two-level approach. Firstly, data were gathered through participant observation over the 11 years of the project. Secondly, as differences between the universities’ approaches began to emerge, we decided to follow (Latour, 1987) certain actors that highlighted markedly different approaches within the network. Adopting a Latourian perspective, the analysis was unfolded with reference to four stages identified as pivotal in previous ANT studies of accounting in the public sector (Chua, 1995, Gendron et al., 2007 and Preston et al., 1992): setting the goal and enrolling actors; circulating translation and dealing with controversies; acting the quasi-object; and insiders going out. These stages should not be viewed as a rigid sequence of steps, but rather as focal points for exploring actors’ stratagems and tactics over time. The results reported here show that the persistency of the rhetorical process of translation pivots around controversies (Latour, 1987). Controversies were found to be essential risks within the PMS implementation: they prompted universities to problematize and engage with the PMS in the attempt to solve them, but they also undermined the possibility of achieving a socio-technical compromise. With this ongoing process of dealing with controversies, the actors’ approaches evolved over time, but also grew more heterogeneous, shaped by the role that each actor had assigned to the PMS (Modell, 2009, Townley et al., 2003 and Watkins and Arrington, 2007). Without inferring any precise rule of behaviour, this heterogeneity of actions was captured by identifying three distinctive categories of actors: strategic allies, technical warriors, and searchers. The purpose of these categories was not to provide a rigid classification, but only to represent the diversity of approaches within a spectrum actions, and of actors with louder or softer voices. All these voices, irrespective of their strength, proved essential for creating the glue which held the network together and sustained interest in the PMS. To develop our arguments, the remainder of this paper is organised as follows. First, we provide an analysis of the difficulties of implementing PMSs in the public sector. The conceptual perspective is then illustrated (Section 3), followed by a description of the research approach (Section 4). An overview of the Italian reform context introduces the presentation of results. Finally, we discuss the findings and draw some conclusions

The process of translating PMSs in public sector organisations is a field of research that has yet to be fully explored (Modell, 2009). Although previous contributions have analysed accounting and PMSs in the context of NPM reforms (see for example Bracci, 2009, Chua, 1995, Robinson, 2003, Townley et al., 2003 and Watkins and Arrington, 2007), there was a need for further work (Modell, 2009) to capture the variety of dynamics involved in translating them into operational use. To help fill this gap, this article longitudinally examines the Good Practice project, promoted in 1998 by the government during the initial NPM phase ( Moscati, 2001 and Rebora and Turri, 2008), with the aim of implementing PMSs to install a new accountability culture in Italian universities. Drawing on ANT, we sought to shed light on how universities translated the PMS over an 11-year period, highlighting two pivotal elements in the process of translation: the role controversies, and the emergence—and importance—of a diversity of actors’ approaches. From a functional perspective, an implementation is considered successful when all controversies have been solved; this study instead found that controversies represent ‘essential risks’ for the PMS: essential because they maintain interest and discussion within the network; and risks because they always challenge the possibility of achieving a socio-technical compromise. This critical reflection about the Good Practice project provides potentially useful insights for managers and policy makers undertaking PMS implementations. It suggests that controversies should not be seen as something that is necessarily ‘bad’, and therefore to be prevented or immediately resolved, but rather as useful signals indicative of the dynamicity, needs and divergences of actors in the network. Indeed, following actors’ controversies through the four stages of translations demands extensive time and effort, for which a mediator can be important not so much to impose a pre-defined view of the PMS, but to capture what is and is not negotiable. Together with the challenging role of controversies, the translation of PMSs into operational use is marked by the heterogeneity of actors involved, and the extent to which they have voice in the process. The Good Practice project made it possible not only to highlight the variety of actors and stratagems, but also to track their evolution over 11 years. To represent this broad spectrum of actors and actions, we chose to follow three categories of actors that exhibited particularly distinctive approaches: strategic allies, technical warriors and searchers. This focus enabled us to analyse in detail the relationships between actors and the PMS, and the ensuing repercussions on the process of translation. With their more powerful or weaker voices, they all contributed to the enduring experience of the Good Practice project. Strategic allies took a holistic relational approach, and looked upon both the technology and the human actors as important; though they were present in all stages, they played a predominant role in setting the goals and enrolling actors, bringing into the network controversies critical for bonding the university system. Technical warriors were instead engaged mainly with the technology, and saw the functional features of the PMS as the focal point. They played an essential role in translating the protocol, and in verifying the technical appropriateness of the PMS and its utility at the organisational level. Searchers instead represented a weaker voice within the network, that might at first glance appear not to be central to the PMS translation. However this study suggests that even uncertain, problematic actors are crucial to the translation process because they continually question the role of the PMS and its effectiveness. With their unresolved problems, searchers brought into the Good Practice network organisational and technical controversies which challenged the other actors. These results suggest some avenues for future research, to further capture the heterogeneity in the process of translations. First, they point to the utility of paying attention not just to the louder voices, champions or opponents, but also to the more silent actors or organisations. The silent and unheard help to capture the complexity of institutions and the polyphony (Arnaboldi and Lapsley, 2010) which underlies the translation of accounting techniques. Finally, our results, and specifically the centrality of controversies, suggest further analysing the roles and responsibilities of mediators. Immersed at the crossroads between actors and technologies, mediators guide the definition of negotiable and doctrinal issues of the PMS, and indirectly shape the configuration of the network, selecting and amplifying the actors’ voices, but also pushing them towards specific technological ‘solutions’.