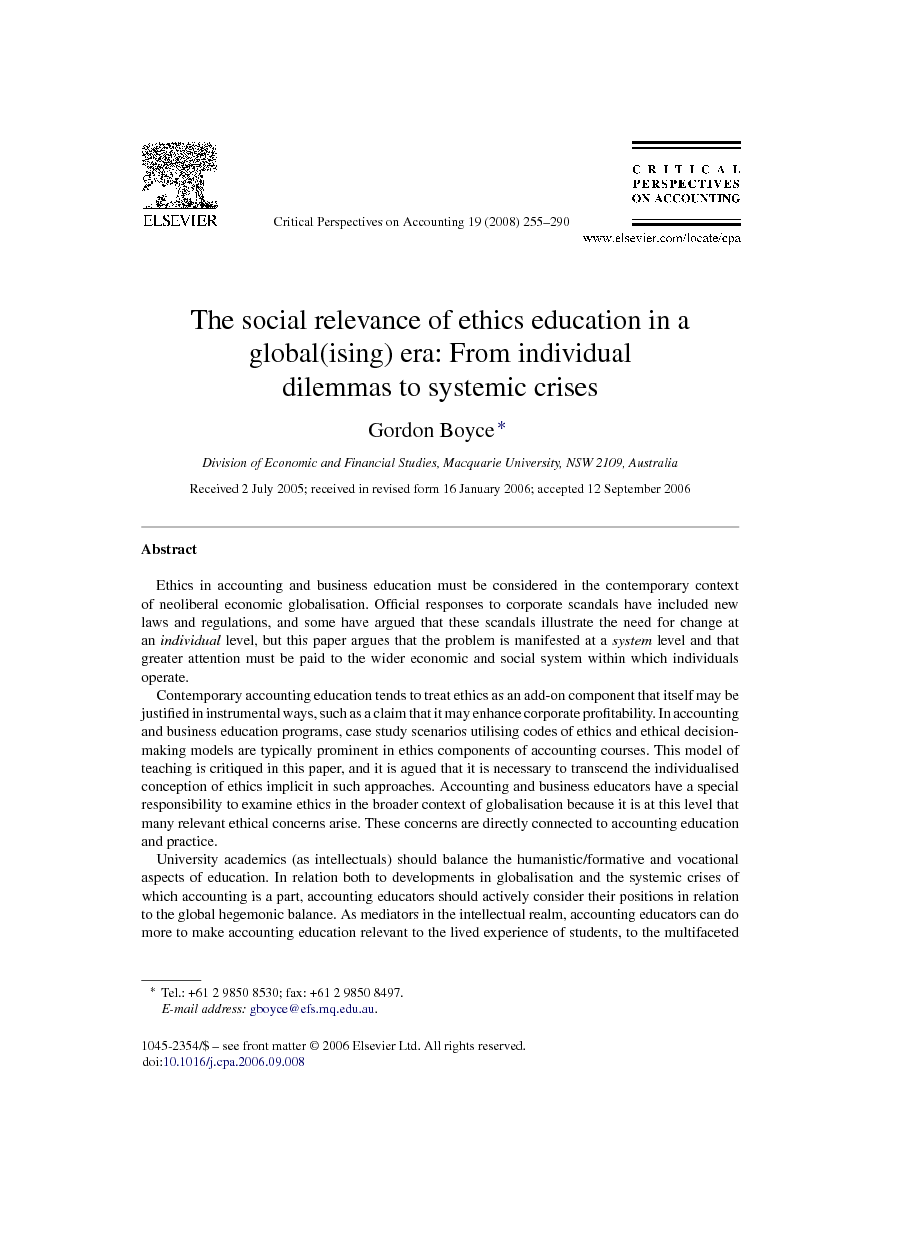 Ethics in accounting and business education must be considered in the contemporary context of neoliberal economic globalisation. Official responses to corporate scandals have included new laws and regulations, and some have argued that these scandals illustrate the need for change at an individual level, but this paper argues that the problem is manifested at a system level and that greater attention must be paid to the wider economic and social system within which individuals operate. Contemporary accounting education tends to treat ethics as an add-on component that itself may be justified in instrumental ways, such as a claim that it may enhance corporate profitability. In accounting and business education programs, case study scenarios utilising codes of ethics and ethical decision-making models are typically prominent in ethics components of accounting courses. This model of teaching is critiqued in this paper, and it is agued that it is necessary to transcend the individualised conception of ethics implicit in such approaches. Accounting and business educators have a special responsibility to examine ethics in the broader context of globalisation because it is at this level that many relevant ethical concerns arise. These concerns are directly connected to accounting education and practice. University academics (as intellectuals) should balance the humanistic/formative and vocational aspects of education. In relation both to developments in globalisation and the systemic crises of which accounting is a part, accounting educators should actively consider their positions in relation to the global hegemonic balance. As mediators in the intellectual realm, accounting educators can do more to make accounting education relevant to the lived experience of students, to the multifaceted global(ising) context in which we live, and to the capacities of graduates to act meaningfully in and on the world, individually and collectively.

We need to find ways to meld our personal choices with the micro, meso, and macro contexts within which we are situated, extending the personal to collective and social processes. Accounting educational and research praxis must extend beyond change ‘out there’ to include change to the ‘in here’ self-consciousness of actors, subjects, and their observers (Tinker and Gray, 2003, p. 751). The out-there and in-here are both needed. Critical activity in teaching and learning programs in accounting provides an arena where all academics can make a contribution and have a potential impact. Intellectual involvement with students is perhaps the most important activity to be undertaken by educators with a commitment to social change (see Freire, 1996, for example). In this domain, by starting from what is already known about the functioning of accounting, there is considerable scope for accounting academics, within the rubric of the current accounting curricular arrangements, to play a significant role in consciousness-raising (Boyce, 2004). They may thus provide the sort of intellectual mediation that facilitates the development of a society characterised by ethical behaviour and socially and environmentally sound practices.