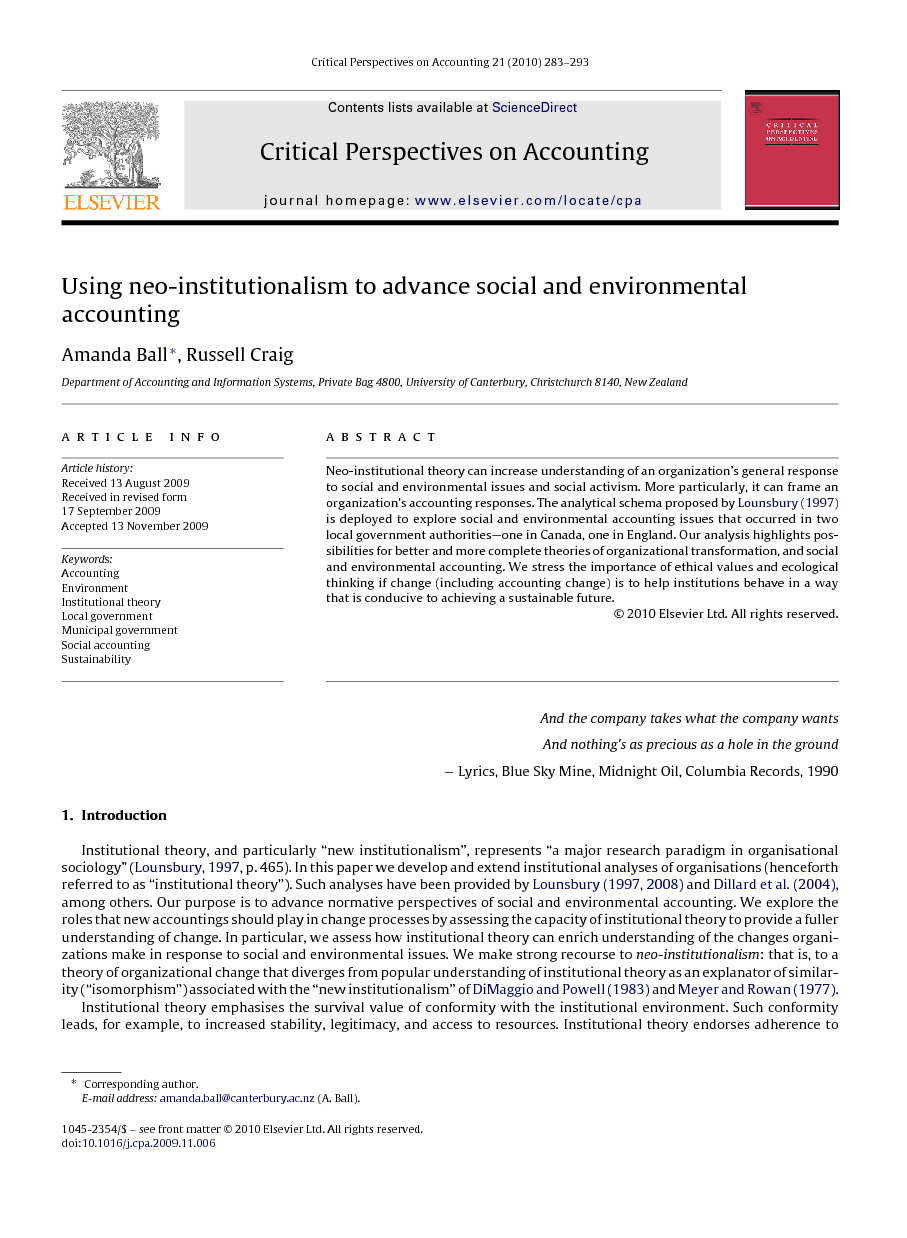 The preceding exploration supports contention by Greenwood and Hinings (1996) and Lounsbury, 1997 and Lounsbury, 2008, among others, that institutional theory can help in developing explanations of change. We now highlight several areas in which we can develop a fuller understanding of change in the context of environment and accounting, by engaging Lounsbury's four dimensional tool kit. Quadrant 1 highlights how social and environmental accounting literature under-specifies social pressures. The suggestion is that there have been taken-for-granted assumptions about the direction of public pressure; that is, whilst interests and agency are a cornerstones of accountability models, there has been little empirical work attending to this dimension. Indeed, the focus has tended to be applied to what are assumed to be fixed stakeholder interests. Future research using the macro/interests lens should pay greater attention to how political interest groups are mobilized. Additionally, there would be considerable merit in engaging the macro interests lens to situate an organization within its field of power relations. This would enhance thinking about “fracture lines” (Lounsbury, 2002a and Lounsbury, 2002b) within institutions, and be conducive to the emergence of a more nuanced understanding of social pressure in closely specified situations. Importantly, as well, is the use of the macro/interests lens to draw attention to the possibility of a perspective based on “social movements in organizations” (Lounsbury, 1997, Lounsbury, 2002a and Lounsbury, 2002b). One implication of this is that researchers should pay greater attention to the interests, beliefs, and activities of managers in organizations under scrutiny; and that they should recognise the pursuit of distinctive interests by employees despite conditions of powerful institutional constraint. If there are processes of re-institutionalisation in the context of the sustainability agenda, attention should be directed to determining which power and interests are shaping the change, and whether we can locate the processes involved historically. Desirably, the main thrust of research efforts examining the efficacy of social and environmental interventions should be located in Quadrant 2. Thus, there would be greater attention to values and interests. Quadrant 3 offers the benefit of being a means whereby change in the context of environment can be progressed. From the perspective of normative agendas on environmental accounting and change, the micro/habits lens suggests we direct attention to how organizations make sense of sustainability through new service offerings and accounting practices. Consistent with Townley (2002) (among others), what is needed is a sense-making engagement, or understanding of different rationalities within a sphere. Thus, those involved in attempts to develop social and environmental accounting research should themselves make better sense of sustainability and all that it entails, both conceptually and practically. The new institutionalism of quadrant 4 helps provide the basis of a much-needed critique of managerialist environmental accounting interventions (Gray, 2002), and of the UK Labour Party's agenda of national standards and performance indicators for local government ( Ball, 2002 and Morris, 2001). Attempts to develop social accounting normatively have had a distinctive structural position based on a fundamental concern with social change. They have tended to be influenced by Marxist intellectual tradition and a radical critique which has challenged capitalistic hegemony strongly. However, there is considerable merit in departing from critical theory to consider whether environmental accounting interventions are successful or not (Gray and Tinker, 2001). Viewing those developments in terms of macro and micro perspectives and from a theory of action perspective has many potential benefits too. Adopting the comprehensive approach advocated by Lounsbury offers a way of addressing the problems of understanding processes of institutional change and highlighting possibilities for future research. Efforts to grapple with the problems of a theory of change are notable for their abstracting processes. Nonetheless, they develop causes of variation in institutional development. From the perspective of social and environmental accounting, these are alarmingly acontextual. Two important limitations arise: first, much literature on institutionalism is set at too great a distance from social and environmental accounting; and second, decentring concerns about class and conflict are not addressed adequately. Another important issue is whether institutional theorists have accorded social and environmental accounting an air of surrogacy: that is, does the arena of social and environmental accounting simply generate just another set of questions through which to improve organizational analysis?