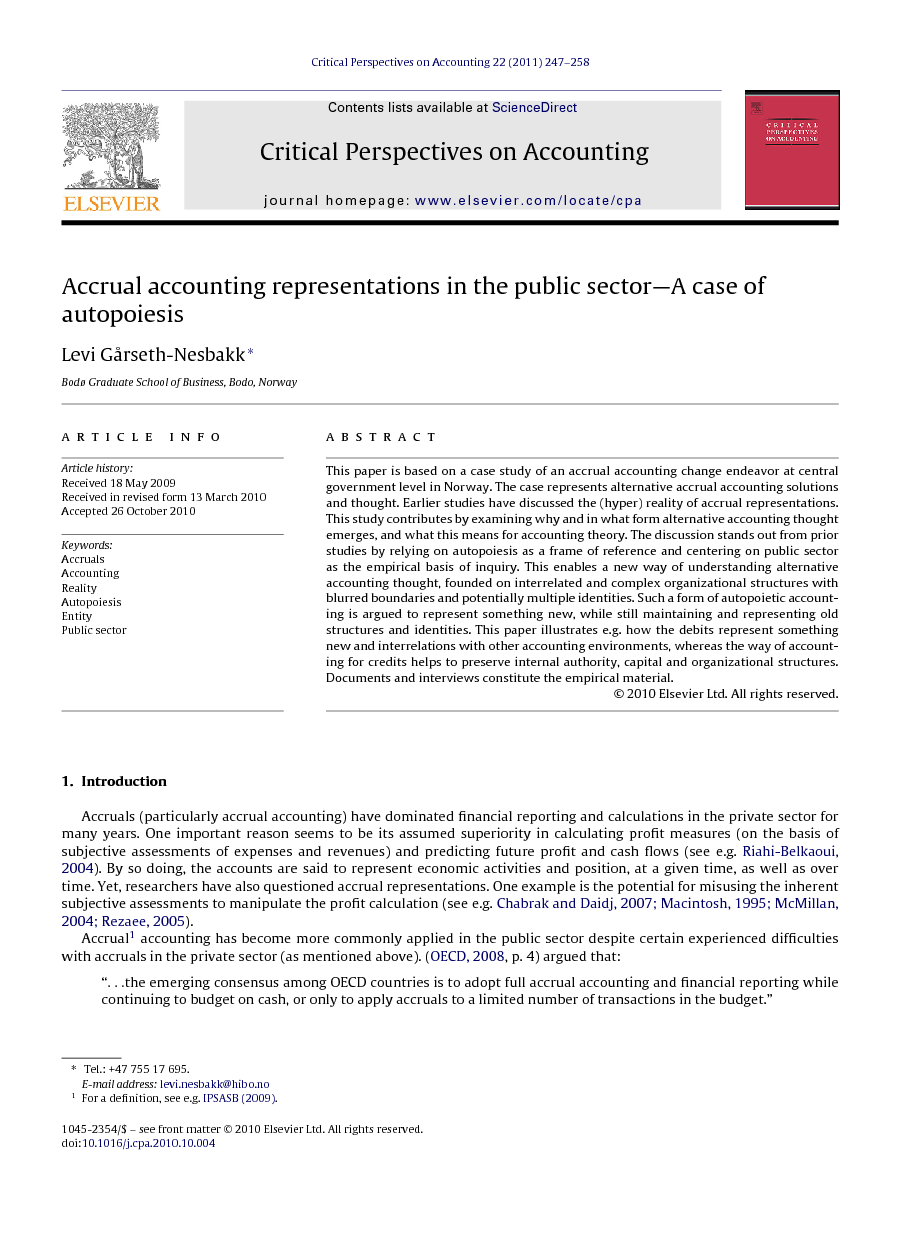 This paper is based on a case study of an accrual accounting change endeavor at central government level in Norway. The case represents alternative accrual accounting solutions and thought. Earlier studies have discussed the (hyper) reality of accrual representations. This study contributes by examining why and in what form alternative accounting thought emerges, and what this means for accounting theory. The discussion stands out from prior studies by relying on autopoiesis as a frame of reference and centering on public sector as the empirical basis of inquiry. This enables a new way of understanding alternative accounting thought, founded on interrelated and complex organizational structures with blurred boundaries and potentially multiple identities. Such a form of autopoietic accounting is argued to represent something new, while still maintaining and representing old structures and identities. This paper illustrates e.g. how the debits represent something new and interrelations with other accounting environments, whereas the way of accounting for credits helps to preserve internal authority, capital and organizational structures. Documents and interviews constitute the empirical material.

Accruals (particularly accrual accounting) have dominated financial reporting and calculations in the private sector for many years. One important reason seems to be its assumed superiority in calculating profit measures (on the basis of subjective assessments of expenses and revenues) and predicting future profit and cash flows (see e.g. Riahi-Belkaoui, 2004). By so doing, the accounts are said to represent economic activities and position, at a given time, as well as over time. Yet, researchers have also questioned accrual representations. One example is the potential for misusing the inherent subjective assessments to manipulate the profit calculation (see e.g. Chabrak and Daidj, 2007, Macintosh, 1995, McMillan, 2004 and Rezaee, 2005). Accrual1 accounting has become more commonly applied in the public sector despite certain experienced difficulties with accruals in the private sector (as mentioned above). (OECD, 2008, p. 4) argued that: “…the emerging consensus among OECD countries is to adopt full accrual accounting and financial reporting while continuing to budget on cash, or only to apply accruals to a limited number of transactions in the budget.” This shows that accruals are much applied in the public sector, but also found difficult to employ for all purposes (see also Baker et al., 2010). This further relates to a critical stance in public sector accruals research literature (illustrated by Arnaboldi and Lapsley, 2009, Carlin, 2005 and Carnegie and West, 2005), often cautioning or critically assessing the use of accruals in the public sector. It has been argued that accruals bring about unwarranted (negative) effects, whereas argued accrual benefits often do not (sufficiently) materialize (e.g. Newberry and Pallot, 2005 and Paulsson, 2006). Still, this matter appears as even more pressing when considering that some researchers have taken the critical discussion of accrual representations a bit further. For instance, when discussing the accounting profession, Macintosh and Shearer (2000) put forward Baudrillard’ ideas of simulacrum, implosion and hyperreality. Relying on (at least partly) the same frame of reference, but focusing more explicitly on the ontological status of information in accounting reports, Macintosh et al. (2000, p. 13) stated: “Our major thesis is that many accounting signs no longer refer to real objects and events and accounting no longer functions according to the logic of transparent representation, stewardship or information economics.” The debate over accrual accounting representations, not only in the private sector, but increasingly also in the public sector, signifies complexity and illustrates difficulties associated with accrual based constructions. Still, despite the criticism of accruals in both the private and the public sector, there is a paucity of research looking more closely into cases where alternative directions and accounting thought are pursued. The purpose of this paper is therefore to explore what alternative accrual accounting representations look like. In so doing, this study briefly readdresses the referred discussion on hyperreality in accounting. Still, the particular aim of this paper is not to engage in-depth philosophical discussions, but rather to contribute by examining why and in what form alternative accounting thought emerges, and what this means for accounting theory. This paper draws on insight and evidence from the public sector in Norway and its recent experience with exploring and developing accrual accounting solutions for subordinated central government agencies. The empirical material is based on document studies as well as interviews. The documents cover the time period of 2001–early 2009. Twenty-six interviews involving forty interviewees were conducted during the time period of late 2004–early 2007. However, they related to a larger research project, meaning that not all of the interviews were equally relevant to the discussions in this paper. Nonetheless, they were all oriented towards the accrual accounting pilot project in Norway. This paper continues by presenting the frame of reference, and thereafter the Norwegian case. Subsequently, the empirical material is discussed, and later concluded upon. The latter also entails suggestions for further research.

The empirical illustrations given in this case show that developing accrual accounting solutions at central government level is not a straightforward matter. In this case one ended up with (particularly credit entry related) accounting solutions deviating much from private sector accounting solutions. This reflected in part an accounting context where different accounting objectives were pursued; herein the wish for maintaining a certain governmental identity and making sure the accounting solutions reflected this. The Norwegian case reflects ambiguity arising from the accrual change endeavor (for a related discussion, see Arnaboldi and Lapsley, 2009). The ambiguity concerned e.g. the multiple areas and forms in which accrual accounting solutions could be constructed, but it also reflected a complex set of activities and ways of organizing that were to be represented. Such ambiguity and complexity that relate to challenging accounting representations/constructions have in this paper been argued to comprise a case of autopoiesis. This refers to several traits with the alternative accounting thought and solutions. For instance, the accounting solutions clearly represent something new (as e.g. represented by the more comprehensive asset side in the balance sheet statement). At the same time, the accounting solutions also show inherent signs of preserving established governmental structures and identity (which can be seen from the way of accounting for credits). The same argument applies for the way the new accounting solutions are build on top of established organizational structures. In this way the new accrual accounting solutions constitute a stabilizing mechanism. By bringing in new (accounting) elements they serve the dual function of stabilizing relations with other sectors and countries (for instance as a response to calls for harmonization), while maintaining established internal authority and organizational structures. The empirical material in this study has brought forward different implications, relating to discussions on hyperreality of accrual accounting representations, but also accounting theory. For instance, albeit the autopoietic nature of the accrual accounting representations may make them somewhat difficult to understand, they nevertheless do represent the kind of reality which the accounting standard developers set out to represent. To understand this, however, requires consideration of the accounts’ holistic nature. That is; the larger picture, herein the defined accounting objectives, the whole set of credits and debits, as well as the assumptions on which the accounting solutions rest, must be examined and understood (for a related discussion, see Falkman, 1997). The reported case illustrates the need for more accounting theorizing. Especially, more studies are needed that emphasize accounting users. The latter concerns what kinds of users to accentuate, and to learn more about what they understand as well as the way they go about reading accounting statements and interpreting various accounting solutions. For instance, interpretations risk being distorted if many tend to (over)emphasize bottom line figures. This is furthermore interlaced with the question of what government level to account for. Firstly, different accounting users are situated at each level (compare e.g. agency, ministry and the whole of government level). Secondly, tailor-made and opaque accounting solutions may cancel out in more aggregated accounts. A related discussion concerns the form and size of accounting entities (i.e. accounting entity theorizing). This furthermore corresponds to research carried out in a private sector setting (e.g. Macintosh, 2003, Macintosh, 2004 and Macintosh et al., 2009), where difficulties vis-à-vis accounting representations have been pointed out. The reported difficulties were located in, or caused by, complex and somewhat unclear organizational structures, as well as a variety of (service) production areas and products being offered. Finally though, this study has shown how the concept of autopoiesis may illuminate alternative accounting thought, -representations and -development. This frame of reference may also prove useful in other studies that are situated in different surroundings.