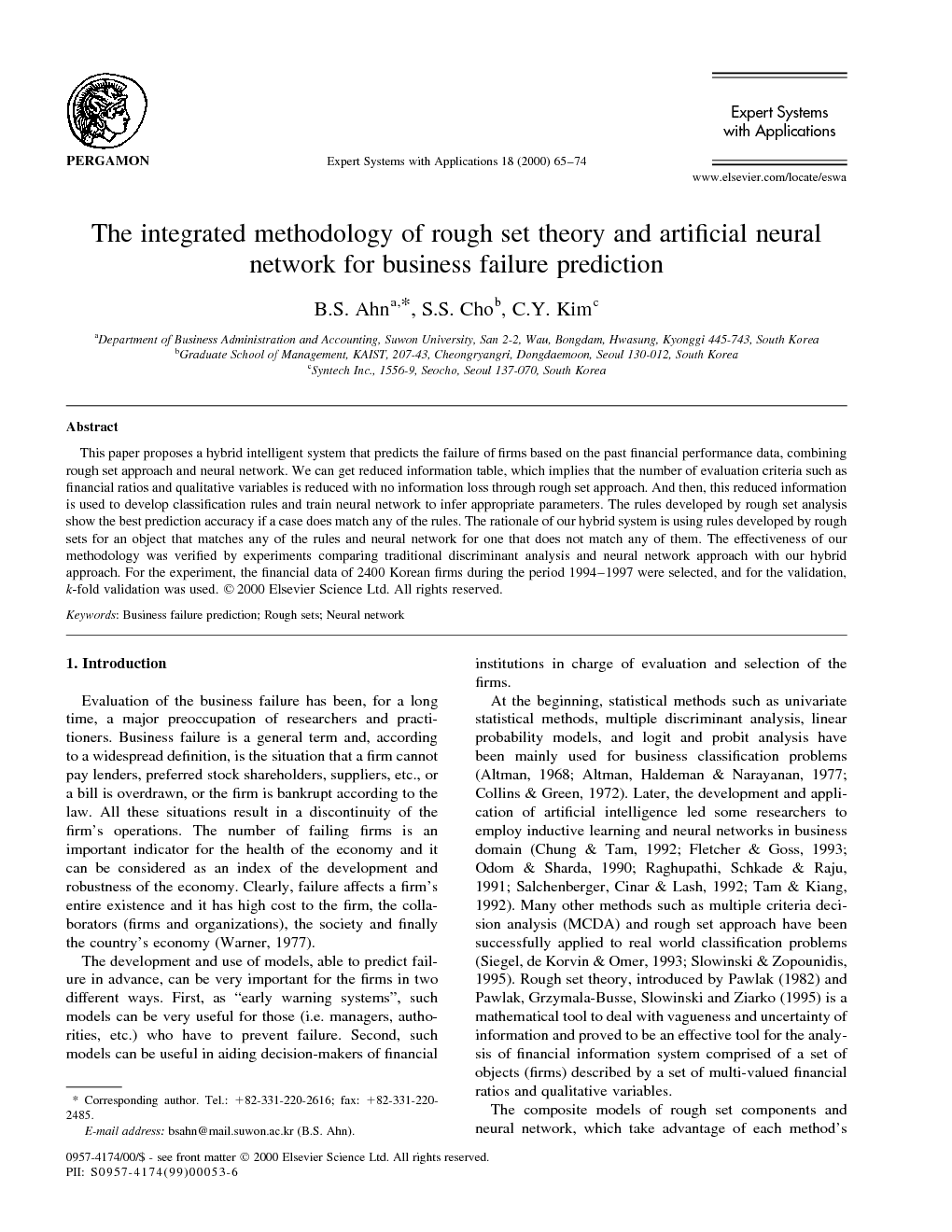 This paper proposes a hybrid intelligent system that predicts the failure of firms based on the past financial performance data, combining rough set approach and neural network. We can get reduced information table, which implies that the number of evaluation criteria such as financial ratios and qualitative variables is reduced with no information loss through rough set approach. And then, this reduced information is used to develop classification rules and train neural network to infer appropriate parameters. The rules developed by rough set analysis show the best prediction accuracy if a case does match any of the rules. The rationale of our hybrid system is using rules developed by rough sets for an object that matches any of the rules and neural network for one that does not match any of them. The effectiveness of our methodology was verified by experiments comparing traditional discriminant analysis and neural network approach with our hybrid approach. For the experiment, the financial data of 2400 Korean firms during the period 1994–1997 were selected, and for the validation, k-fold validation was used.

Evaluation of the business failure has been, for a long time, a major preoccupation of researchers and practitioners. Business failure is a general term and, according to a widespread definition, is the situation that a firm cannot pay lenders, preferred stock shareholders, suppliers, etc., or a bill is overdrawn, or the firm is bankrupt according to the law. All these situations result in a discontinuity of the firm's operations. The number of failing firms is an important indicator for the health of the economy and it can be considered as an index of the development and robustness of the economy. Clearly, failure affects a firm's entire existence and it has high cost to the firm, the collaborators (firms and organizations), the society and finally the country's economy (Warner, 1977). The development and use of models, able to predict failure in advance, can be very important for the firms in two different ways. First, as “early warning systems”, such models can be very useful for those (i.e. managers, authorities, etc.) who have to prevent failure. Second, such models can be useful in aiding decision-makers of financial institutions in charge of evaluation and selection of the firms. At the beginning, statistical methods such as univariate statistical methods, multiple discriminant analysis, linear probability models, and logit and probit analysis have been mainly used for business classification problems (Altman, 1968, Altman et al., 1977 and Collins and Green, 1972). Later, the development and application of artificial intelligence led some researchers to employ inductive learning and neural networks in business domain (Chung and Tam, 1992, Fletcher and Goss, 1993, Odom and Sharda, 1990, Raghupathi et al., 1991, Salchenberger et al., 1992 and Tam and Kiang, 1992). Many other methods such as multiple criteria decision analysis (MCDA) and rough set approach have been successfully applied to real world classification problems (Siegel et al., 1993 and Slowinski and Zopounidis, 1995). Rough set theory, introduced by Pawlak, 1982 and Pawlak et al., 1995 is a mathematical tool to deal with vagueness and uncertainty of information and proved to be an effective tool for the analysis of financial information system comprised of a set of objects (firms) described by a set of multi-valued financial ratios and qualitative variables. The composite models of rough set components and neural network, which take advantage of each method's generic characteristics, were constructed to predict a sample of bank holding patterns (Hashemi et al., 1998 and Jelonek et al., 1995). They used rough sets as a preprocessor for neural network. Using sorting rules developed by rough sets may lead to a burdensome situation where a new case does not match any of the sorting or classification rules. On the other hand, the neural network approach classifies every object by its weighting mechanism, although in a black box fashion. Jelonek et al. (1995) employed one-dimensional (1D) reduction (attribute reduction) and Hashemi et al. (1998) employed 2D reduction (attribute and object reduction). After reduction of information system they trained neural network with the reduced information system. And then, they applied the neural network to prediction. In this paper, we propose a hybrid intelligent system combining rough set approach and neural network. Rough set approach, by which redundant attributes in multi-attribute information system can be removed without any information loss, is utilized as a preprocessor to improve business prediction capability by neural network. The streamlined information system by rough set approach is fed into neural network for training. At the prediction step, we apply the rules developed by rough sets first, and then we apply the neural network to the objects that does not match any of the rules. The effectiveness of our hybrid approach was verified with experiments that compared traditional discriminant analysis and neural network approach with the hybrid approach. This paper is organized as follows. Section 2 describes classification techniques used in previous researches concerned with our paper: rough set theory and neural network, respectively. In Section 3, proposed data preprocessing algorithm by rough set and hybrid models is described. In Section 4, we analyze and compare the results of each model, and conclusions in Section 5.

The experiment results show the effectiveness of rough set approach as a data preprocessor for neural network. We proposed 2D-reduction algorithm and proved its usefulness. The reduction of information system has a great meaning for neural network in that reduction of attributes prevents overfitting problem and saves training time. Further, removing conflicting objects and train neural network with consistent cases can bring performance improvement as well as reduction of training time. The proposed hybrid models were proven to outperform discriminant analysis model and neural network model. In comparison between Hybrid Model I and II, the experiment results could not show itself that the Hybrid Model II performed better than Hybrid Model I. This was due to the fact that both models used same rule set generated by rough set analysis, and this rule component covered rather large part compared to neural network component. In our research model, firms except financial industry and different size were mixed in case data set, so we neglected the difference among industries and difference in the sizes of companies. Further, in generating rules, we strictly applied rough set theory, so there existed a possibility that rule could not be generated because of just a few extraordinary objects. With more work in dealing with doubtful region we may discover more valuable knowledge. For example, we can make some rules in rough set module such that if the percentage of conflicting object is less than 5%, we can ignore them and generate rule from those objects.