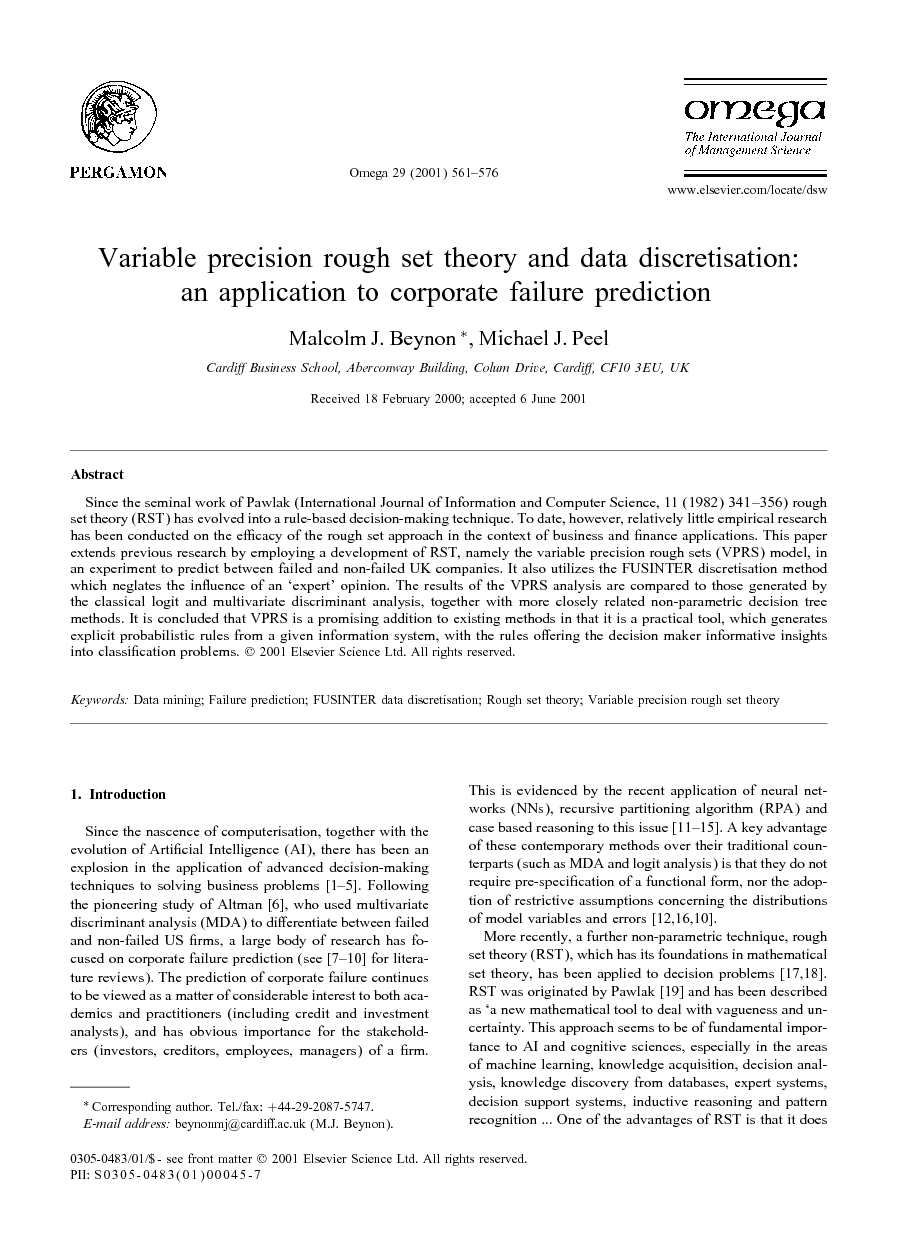 Since the seminal work of Pawlak (International Journal of Information and Computer Science, 11 (1982) 341–356) rough set theory (RST) has evolved into a rule-based decision-making technique. To date, however, relatively little empirical research has been conducted on the efficacy of the rough set approach in the context of business and finance applications. This paper extends previous research by employing a development of RST, namely the variable precision rough sets (VPRS) model, in an experiment to predict between failed and non-failed UK companies. It also utilizes the FUSINTER discretisation method which neglates the influence of an ‘expert’ opinion. The results of the VPRS analysis are compared to those generated by the classical logit and multivariate discriminant analysis, together with more closely related non-parametric decision tree methods. It is concluded that VPRS is a promising addition to existing methods in that it is a practical tool, which generates explicit probabilistic rules from a given information system, with the rules offering the decision maker informative insights into classification problems.

This paper has provided an exposition of variable precision rough sets (VPRS) model which has been developed from rough set theory (RST) as originally formulated by Pawlak [19]. Based on our experimental analysis, the paper has added to the literature in terms of demonstrating the application of VPRS to an important business decision problem, corporate failure prediction. The results of the empirical analysis were encouraging. The use of the FUSINTER method for data discretisation (together with a least square method of nearest rule calculation for classification), mitigated the requirement of the input of a human expert—which may be deemed undesirable by potential users of VPRS, since the use of human expertise may be impractical, relatively costly and may introduce an unacceptable level of subjective bias into the analysis. Compared to classical statistical methods, and more closely related non-parametric decision tree techniques, the VPRS rules when applied to FUSINTER discretised variables, were found to predict with a reasonable degree of accuracy in training and holdout samples. In addition, it was demonstrated that the logit models, which incorporated the discretised variables, outperformed those based on continuous variables. This may well stem from the fact that the FUSINTER method has the added desirable property of eliminating the influence of outliers.16 As is common with experimental research, our results perhaps raise as many questions as they answer. What is clear, however, is that VPRS, building on RST, offers an innovative approach to rule induction, knowledge discovery and management classification problems. Moreover, in a failure prediction setting, VPRS has a number of desirable properties, in terms of information quality and the formulation of explicit rules (which can be assessed by the user for logical interpretation and consistency), and which can be utilised in expert systems—with NASA, for example, currently using applications in this field. As with decision tree techniques, ceteris paribus, a clear benefit to users of VPRS is the ability to interpret individual rules in a decision-making context (as opposed to interpreting coefficients in conventional statistical models). Hence VPRS generated rules are relatively simple, comprehensible and are directly interpretable with reference to the decision domain. For example, users are not required to possess the technical knowledge and expertise associated with interpreting classical models. These VPRS characteristics are particularly useful to decision makers,17 who are interested in interpreting the rules (based on factual cases) with direct reference to the outcomes they are familiar with—for example a bank's decision whether or not to grant credit, or in respect of auditors’ materiality judgements (see, e.g. [61]). Although classical statistical methods often rely (particularly in corporate failure studies) on relatively ‘crude’ methods of variable selection (e.g. stepwise procedures), and the selection of optimal stopping criteria for existing non-parametric decision tree techniques are still evolving, further research in respect of optimal VPRS β-reduct and rule selection criteria is clearly warranted. In addition, the VPRS results presented in this paper are experimental, and do not aim to be definitive in terms of demonstrating the superiority of the new technique over existing methods. Further research is therefore required on these issues, together with an investigation of the asymptotic and sampling properties of VPRS models. Furthermore, the potential loss of information to the user when continuous data are discretised to facilitate RST and VPRS analysis, is an additional issue which is worthy of further attention. It is hoped that the research presented in this paper will stimulate additional work on these important topics.