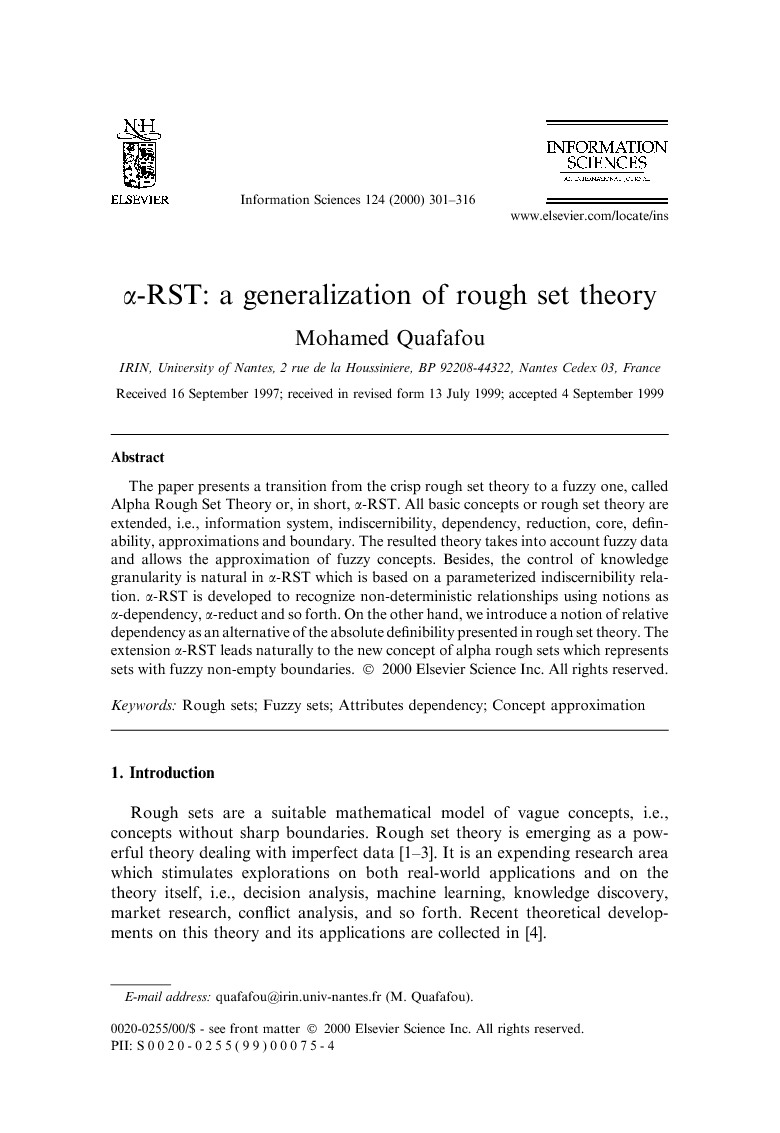 The paper presents a transition from the crisp rough set theory to a fuzzy one, called Alpha Rough Set Theory or, in short, α-RST. All basic concepts or rough set theory are extended, i.e., information system, indiscernibility, dependency, reduction, core, definability, approximations and boundary. The resulted theory takes into account fuzzy data and allows the approximation of fuzzy concepts. Besides, the control of knowledge granularity is natural in α-RST which is based on a parameterized indiscernibility relation. α-RST is developed to recognize non-deterministic relationships using notions as α-dependency, α-reduct and so forth. On the other hand, we introduce a notion of relative dependency as an alternative of the absolute definibility presented in rough set theory. The extension α-RST leads naturally to the new concept of alpha rough sets which represents sets with fuzzy non-empty boundaries.

Rough sets are a suitable mathematical model of vague concepts, i.e., concepts without sharp boundaries. Rough set theory is emerging as a powerful theory dealing with imperfect data [1], [2] and [3]. It is an expending research area which stimulates explorations on both real-world applications and on the theory itself, i.e., decision analysis, machine learning, knowledge discovery, market research, conflict analysis, and so forth. Recent theoretical developments on this theory and its applications are collected in [4]. Rough set theory assumes that information systems contain only crisp data and any feature (attribute) of any object (example) has a precise and unique value. However, real-world data are generally imprecise, tend to be noisy, contaminated by errors, and values for attributes are often missing. To overcome the problem of uncertain data, Slowinski et al. discuss in Ref. [5] four sources of uncertainty; discretization process [11], imprecise data, missing value and multiple descriptors, and they propose a generalization of the classical indiscernibility relation to handle uncertainty caused by multiple descriptors. On the other hand, Ziarko proposed an extension of rough sets, called variable precision model of rough set theory (VPRS), to take into account non-deterministic relationships and to identify strong rules [6] and [7]. Other extensions to standard rough set theory have been suggested in Refs. [8], [9] and [10]. In this paper, we present a new extension of rough set theory, called α-RST, where all basic concepts of rough set theory, i.e., information system, indiscernibility relation, dependency, and so forth, are generalized. Fuzzy sets are used to discretize continue attributes but α-RST is developed to approximate fuzzy sets. On the other hand, the control of knowledge granularity is natural in α-RST because it is based on a parameterized indiscernibility relation. Another feature of α-RST is the notion of α-dependency, i.e., a set of attributes depends on another with a given degree in the range [0, 1]. This notion may be seen as a partial dependency between attributes. We have also introduced notions as α-reduction, α-definability and approximations of fuzzy sets that are also fuzzy. Finally, α-RST is to allow the control of the universe partitioning and the approximation of concepts. In this paper we present extensions of the basic concepts of rough set theory. Section 2 presents a generalized information systems. Section 3 introduces the aggregation operator and states the new description of an object of the universe. A parameterized indiscernibility relation based on a similarity threshold is defined in Section 4. The notion of α-core, using extensions of dependency and reduction concepts, is defined in Section 5. Section 6 analyses the notion of definability and proposes a new definition of definability, called α-definability, which may be seen as a relative definability in contrast with the absolute definability in rough set theory. Section 7 is dedicated to approximations of fuzzy concepts and their properties. At the end of this section, the new concept of Alpha rough sets immerges, i.e., sets with a fuzzy non-empty boundary. In Section 8, we discuss some important issues through related work and we conclude in Section 9.

In this paper a new extension of rough set theory, called α-RST, has been presented. α-RSt offers a suitable framework for dealing with uncertain data and for approximation of fuzzy concepts. It allows the control of knowledge granularity and takes into account non-deterministic relationships. The user can have different views of its data by varying different parameters in the range [0,1]. We continue the development of α-RST by studying the relationship between our approach and related work developed by both rough sets and fuzzy set communities. We are also developing different applications on learning and knowledge discovery using α-RST.