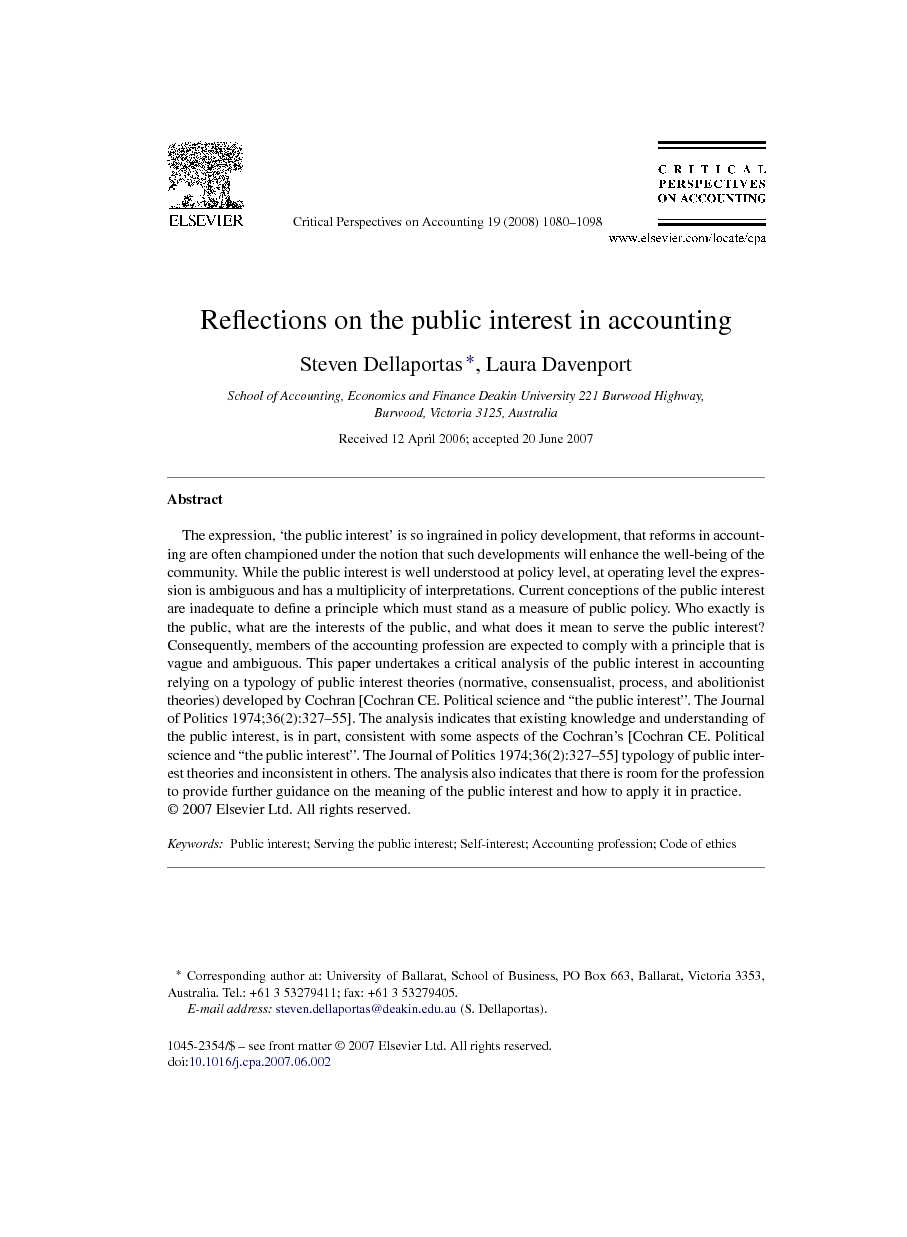 Sociological studies on professionalism in accounting are dominated by the functionalist view which centres on a checklist of attributes or key criteria that distinguish professions from non-professions. Greenwood (1975) identified five distinct characteristics that set apart professions from other occupational groups.1 Embedded in these characteristics is the notion that a profession's founding and continued being relies on performing services not for its own interest but for the public good (Abercrombie et al., 1994, p. 335). According to this view, professions are created because of a genuine human need. A profession's social obligation to serve the public is paralleled by its enhanced occupational status. In return for this enhanced status, members of the profession agree to undertake their work with the public interest in mind (Carey, 1965, p. 376). Therefore, at the heart of a profession is a commitment to serve and protect the public interest (Bivins, 1993, p. 118; Briloff, 1986, p. 1; Canning and O’Dwyer, 2001, p. 727; Mitchell et al., 1994, p. 40). An orientation to serve the needs of the public is a critical factor that sociologists use to distinguish professions from other occupations (Freidson, 1993, p. 19). The functionalist view of professionalisation assumes that there is a natural harmony between individual interests and the interests of society as a whole. However, the functionalist view has been challenged by critical researchers adopting self-interest rationales in understanding the nature of professions. The interactionist perspective (also referred to as the conflict model) views the profession as an occupational monopoly that seeks to further its self-interest (Bédard, 2001). According to this view, the high social and economic status enjoyed by the profession is the result of obtaining a monopolistic position which is maintained by controlling entry through educational requirements (Lindblom and Ruland, 1997). Unfortunately, members use their expertise and authority to abuse the trust that society has placed in them, most often to “advance their own interests at the expense of those they serve” (Frankel, 1989, p. 110). Perhaps it is for this reason that the ‘heart’ of a profession is a commitment, first and foremost, to serve the public interest. However, research in the profession's disciplinary enforcement shows primacy of private interest over public interest (Bédard, 2001, p. 430; Canning and O’Dwyer, 2001 and Parker, 1994). Therefore, according to the interactionist perspective, the public interest is advocated only in that it supports the profession's self-interest. The sociology of professions, discussed only briefly in this paper, highlights the centrality of the public interest to the existence of a profession like accounting. Behaviour contrary to the public interest, real or apparent, can have devastating affects. Consider the case of Arthur Andersen who collapsed in a scandal for its perceived failure to protect the public interest. Andersen was convicted in 2002 for obstruction of justice for shredding documents relating to the collapse of the Enron. The conviction was overturned by the Supreme Court in 2005, however by this time Andersen lost nearly all of its clients. Andersen's greatest foe was not the courts but the public who lost trust in a firm that had built its reputation on integrity. This case demonstrates quite dramatically how the profession relies on the assumptions of trust and how accounting firms can squander their social status (McMillan, 2004). It is contention of this paper that enhancing public trust begins with understanding the public interest and its implications and not simply stating it.