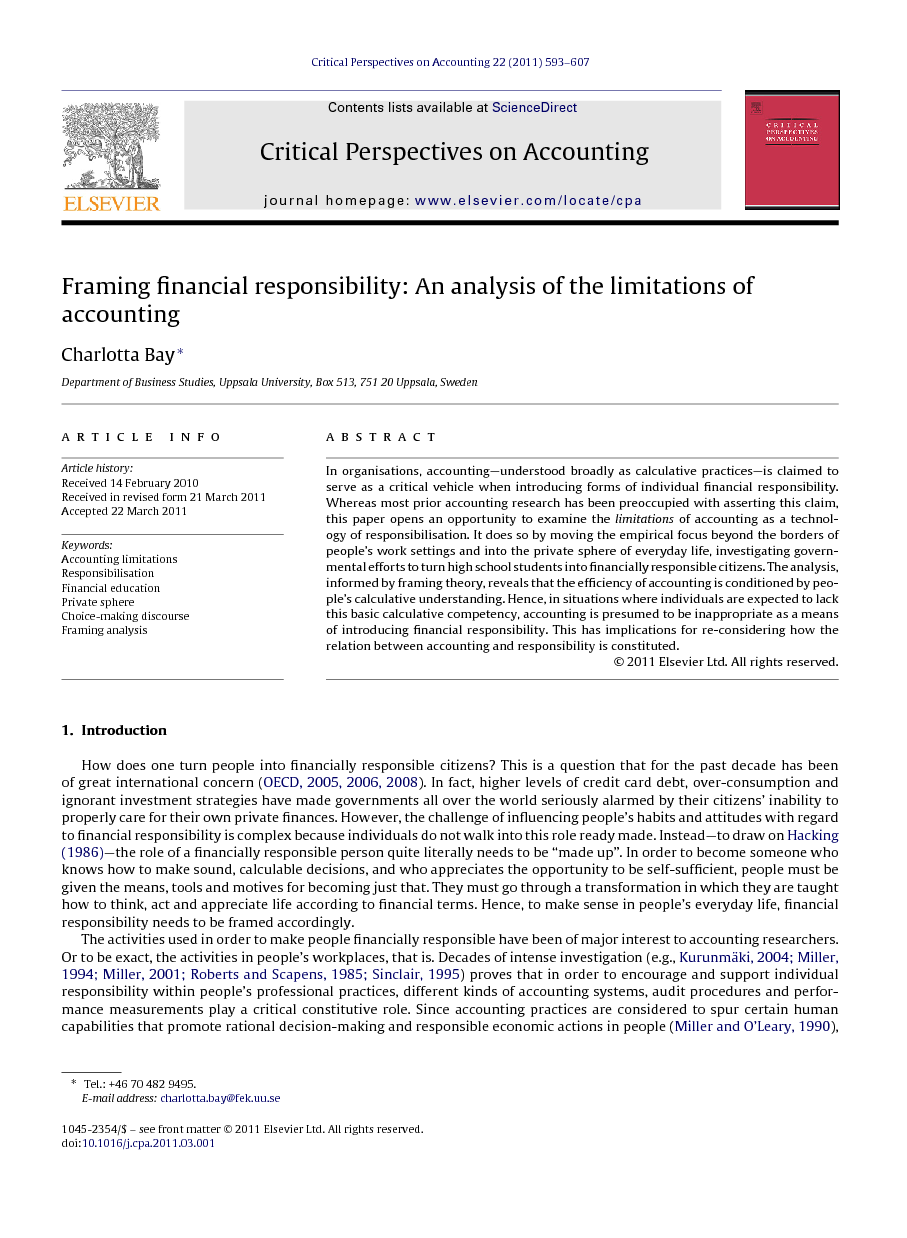 In organisations, accounting—understood broadly as calculative practices—is claimed to serve as a critical vehicle when introducing forms of individual financial responsibility. Whereas most prior accounting research has been preoccupied with asserting this claim, this paper opens an opportunity to examine the limitations of accounting as a technology of responsibilisation. It does so by moving the empirical focus beyond the borders of people's work settings and into the private sphere of everyday life, investigating governmental efforts to turn high school students into financially responsible citizens. The analysis, informed by framing theory, reveals that the efficiency of accounting is conditioned by people's calculative understanding. Hence, in situations where individuals are expected to lack this basic calculative competency, accounting is presumed to be inappropriate as a means of introducing financial responsibility. This has implications for re-considering how the relation between accounting and responsibility is constituted.

However well established within people's work settings, this paper is concerned with examining the relevance of accounting as a means to individualise responsibility in people's own private finances. By addressing this issue, the paper seeks to contribute to the accounting literature in two ways. The first concerns the empirical level of investigation. Studying the financial responsibilisation of people at their personal level of life serves as a response to what Hopwood (1994), Miller (2007) and Jeacle, 2009 and Jeacle, 2010 among others call for: taking accounting research beyond the organisational borders of investigation and putting it in an everyday social context. As most prior accounting literature has been preoccupied with studying the activities and phenomena taking place within organisations, this paper contrastingly targets the sphere of people's personal financial management—a field of investigation that for long has been disregarded and poorly examined (Llewellyn and Walker, 2000). Second, the empirical findings add insights into how the utility of accounting is presumed to be limited in the sense that it is preconditioned by the abilities of its potential users. As such, they problematise the direct transformative capacity of accounting and the role it has been given as a technology of responsibilisation. Miller and O’Leary (1987) state that accounting owes the potential to produce financially responsible individuals. This paper does not oppose to such a claim but demonstrates that it is believed to serve as such only in so far as people see the relevance of accounting as supportive for making decisions. If not, accounting needs to be activated, or as Munro puts it “brought to life” (Munro, 1993: 256). This is to be done by taking a detour (Catasús, 2010), or perhaps a step back. In this paper, it is argued that before accounting practices can be introduced to people, they must be endowed with a choice-making mindset. A choice-making discourse is thus claimed to serve as a precondition for people to eventually become appreciative of accounting as a means for responsible decision-making. If such discourse is not initially in place, it needs to be initiated. An issue for future research would be to further investigate whether kindred responsibilisation processes change in relation to other everyday milieus and mundane practices. If accounting, as Hopwood suggests, “becomes more influential in everyday affairs” (1994: 301), such research would advance and add important nuances to our understanding of the specific conditions accounting is mobilised (or not) as a mode of everyday intervention.