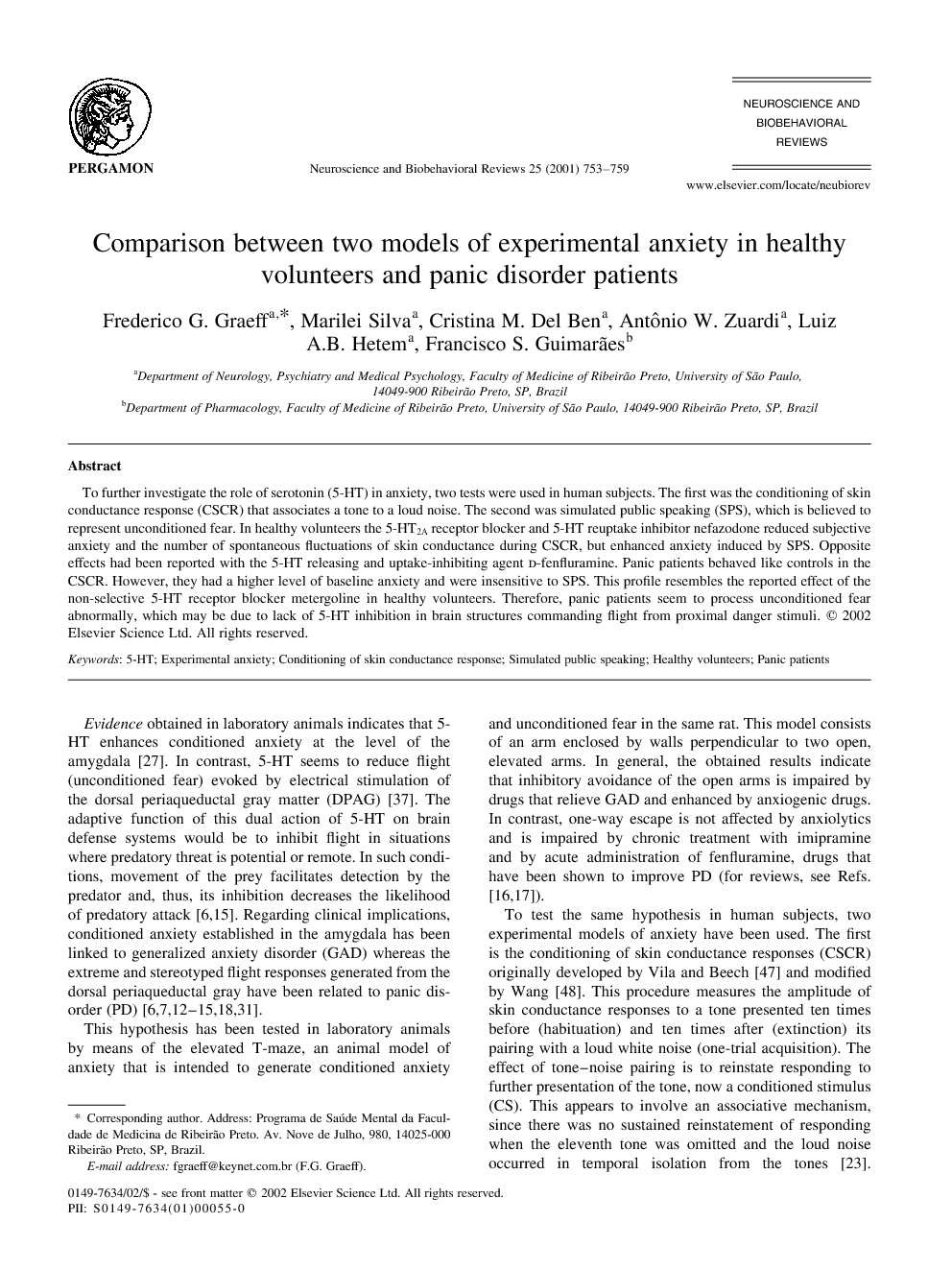 To further investigate the role of serotonin (5-HT) in anxiety, two tests were used in human subjects. The first was the conditioning of skin conductance response (CSCR) that associates a tone to a loud noise. The second was simulated public speaking (SPS), which is believed to represent unconditioned fear. In healthy volunteers the 5-HT2A receptor blocker and 5-HT reuptake inhibitor nefazodone reduced subjective anxiety and the number of spontaneous fluctuations of skin conductance during CSCR, but enhanced anxiety induced by SPS. Opposite effects had been reported with the 5-HT releasing and uptake-inhibiting agent d-fenfluramine. Panic patients behaved like controls in the CSCR. However, they had a higher level of baseline anxiety and were insensitive to SPS. This profile resembles the reported effect of the non-selective 5-HT receptor blocker metergoline in healthy volunteers. Therefore, panic patients seem to process unconditioned fear abnormally, which may be due to lack of 5-HT inhibition in brain structures commanding flight from proximal danger stimuli.

Evidence obtained in laboratory animals indicates that 5-HT enhances conditioned anxiety at the level of the amygdala [27]. In contrast, 5-HT seems to reduce flight (unconditioned fear) evoked by electrical stimulation of the dorsal periaqueductal gray matter (DPAG) [37]. The adaptive function of this dual action of 5-HT on brain defense systems would be to inhibit flight in situations where predatory threat is potential or remote. In such conditions, movement of the prey facilitates detection by the predator and, thus, its inhibition decreases the likelihood of predatory attack [6] and [15]. Regarding clinical implications, conditioned anxiety established in the amygdala has been linked to generalized anxiety disorder (GAD) whereas the extreme and stereotyped flight responses generated from the dorsal periaqueductal gray have been related to panic disorder (PD) [6], [7], [12], [13], [14], [15], [18] and [31]. This hypothesis has been tested in laboratory animals by means of the elevated T-maze, an animal model of anxiety that is intended to generate conditioned anxiety and unconditioned fear in the same rat. This model consists of an arm enclosed by walls perpendicular to two open, elevated arms. In general, the obtained results indicate that inhibitory avoidance of the open arms is impaired by drugs that relieve GAD and enhanced by anxiogenic drugs. In contrast, one-way escape is not affected by anxiolytics and is impaired by chronic treatment with imipramine and by acute administration of fenfluramine, drugs that have been shown to improve PD (for reviews, see [16] and [17]). To test the same hypothesis in human subjects, two experimental models of anxiety have been used. The first is the conditioning of skin conductance responses (CSCR) originally developed by Vila and Beech [47] and modified by Wang [48]. This procedure measures the amplitude of skin conductance responses to a tone presented ten times before (habituation) and ten times after (extinction) its pairing with a loud white noise (one-trial acquisition). The effect of tone–noise pairing is to reinstate responding to further presentation of the tone, now a conditioned stimulus (CS). This appears to involve an associative mechanism, since there was no sustained reinstatement of responding when the eleventh tone was omitted and the loud noise occurred in temporal isolation from the tones [23]. Therefore, it is assumed that this model generates conditioned anxiety, related to GAD. The second model is the simulated public speaking (SPS) test elaborated by McNair et al. [32], in which the subject is requested to prepare a speech and then talk in front of a video camera, the performance being recorded in videotape. Anxiety and other subjective states are assessed at different phases of the experimental session through self-rating scales. Fear of speaking in public is the most common social fear found in epidemiological studies [11] and [42], being rather constant across gender, race and age [36]. In addition, the SPS test has been shown to provoke anxiety in healthy volunteers, irrespective of trait anxiety level, while another experimental model of anxiety, the stroop color test, was anxiogenic only in persons with high trait anxiety [35]. For these reasons, the SPS test is believed to mobilize unconditioned fear mechanisms. Although in terms of face validity SPS is similar to social anxiety disorder rather than panic, the pharmacological profile of the test seems to correlate with PD, as it will be discussed later. The following sections present a brief review of pharmacological evidence with drugs affecting 5-HT that have been assayed in healthy volunteers. Only drugs that have been tested with both the CSCR and the SPS tests are analyzed here. Also, an investigation comparing the response of panic patients and normal controls to the same experimental models will be described.

The pharmacological results reviewed here and elsewhere [7] and [17] support the view that the CSCR and the SPS tests generate different emotional states. The conditioned anxiety induced by the former model seems to be enhanced by 5-HT and related to GAD, whereas SPS-induced anxiety is likely to be unconditioned, inhibited by 5-HT and related to PD. In addition, the low sensitivity of panic patients to the SPS [9] indicates that they process unconditioned fear abnormally. This may be due to lack of 5-HT inhibition on neurons of the DPAG that command defense reactions to proximal threat [6], [13], [15], [17], [18] and [31]. Overall, the evidence discussed above testifies to the usefulness of experimental models of human anxiety for studying the neurobiology of anxiety disorders.