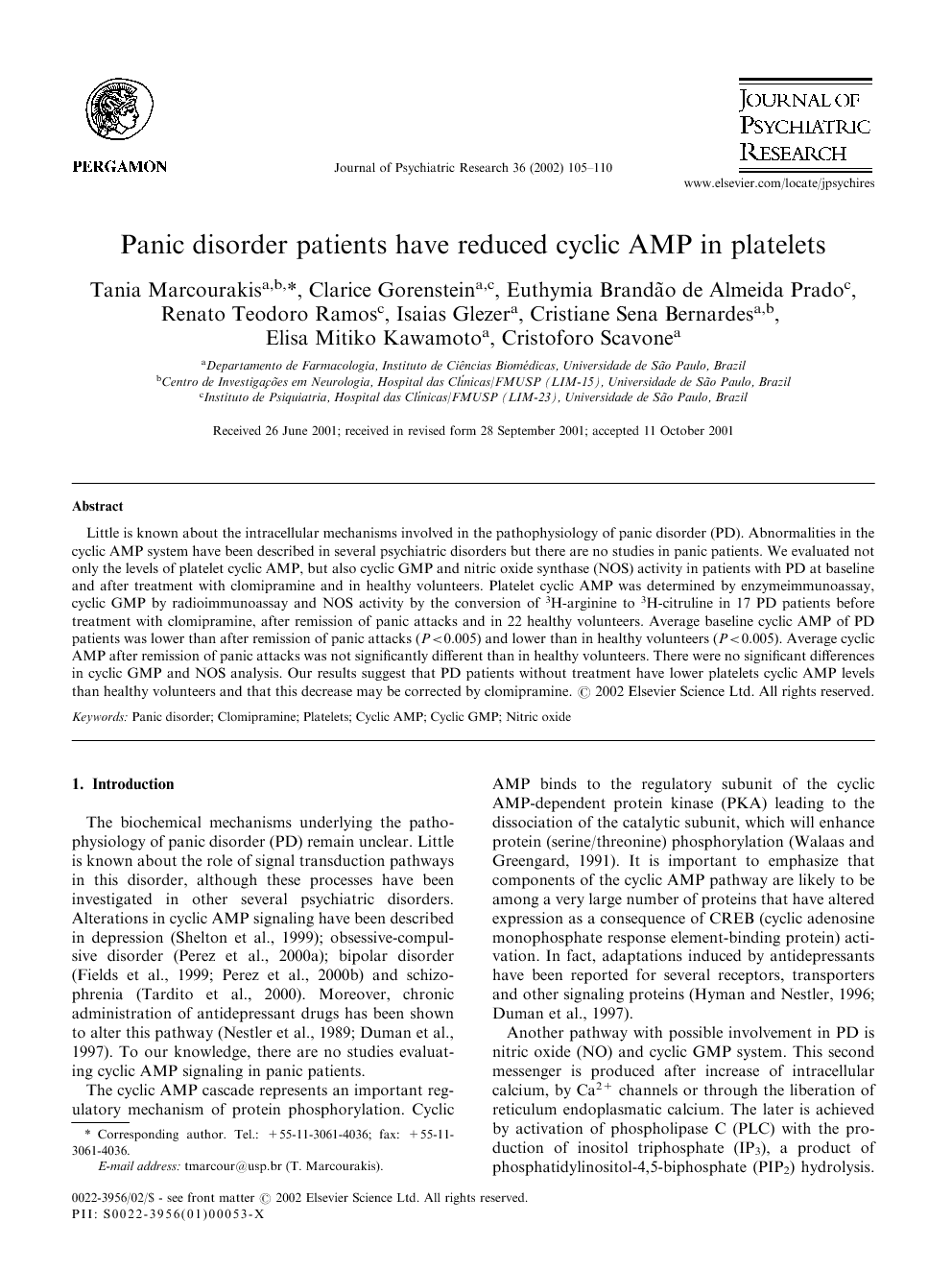 The biochemical mechanisms underlying the pathophysiology of panic disorder (PD) remain unclear. Little is known about the role of signal transduction pathways in this disorder, although these processes have been investigated in other several psychiatric disorders. Alterations in cyclic AMP signaling have been described in depression (Shelton et al., 1999); obsessive-compulsive disorder (Perez et al., 2000a); bipolar disorder (Fields et al., 1999 and Perez et al., 2000b) and schizophrenia (Tardito et al., 2000). Moreover, chronic administration of antidepressant drugs has been shown to alter this pathway (Nestler et al., 1989 and Duman et al., 1997). To our knowledge, there are no studies evaluating cyclic AMP signaling in panic patients. The cyclic AMP cascade represents an important regulatory mechanism of protein phosphorylation. Cyclic AMP binds to the regulatory subunit of the cyclic AMP-dependent protein kinase (PKA) leading to the dissociation of the catalytic subunit, which will enhance protein (serine/threonine) phosphorylation (Walaas and Greengard, 1991). It is important to emphasize that components of the cyclic AMP pathway are likely to be among a very large number of proteins that have altered expression as a consequence of CREB (cyclic adenosine monophosphate response element-binding protein) activation. In fact, adaptations induced by antidepressants have been reported for several receptors, transporters and other signaling proteins (Hyman and Nestler, 1996 and Duman et al., 1997). Another pathway with possible involvement in PD is nitric oxide (NO) and cyclic GMP system. This second messenger is produced after increase of intracellular calcium, by Ca2+ channels or through the liberation of reticulum endoplasmatic calcium. The later is achieved by activation of phospholipase C (PLC) with the production of inositol triphosphate (IP3), a product of phosphatidylinositol-4,5-biphosphate (PIP2) hydrolysis. Ca2+ activates constitutive nitric oxide synthase (NOS), a calmodulin dependent enzyme, producing NO. NO acts on soluble guanylyl cyclase with the formation of cyclic GMP which in turn can activate the cyclic GMP-dependent kinase (PKG) involved in phosphorilation processes (Wang and Robinson, 1995). Plein and Berk (1999) have investigated platelets Ca2+ levels in panic patients after stimulation with serotonin and thrombin, in order to evaluate serotonergic involvement in this disorder. They found Ca2+ increase with thrombin but not with serotonin stimulation. In order to clarify the role of those mechanisms in the pathophysiology of panic disorder, this study explores (1) the involvement of platelets NO, cyclic GMP and cyclic AMP in this clinical condition and (2) the effect of the treatment with clomipramine, an effective drug in this disorder (Gentil et al., 1993).