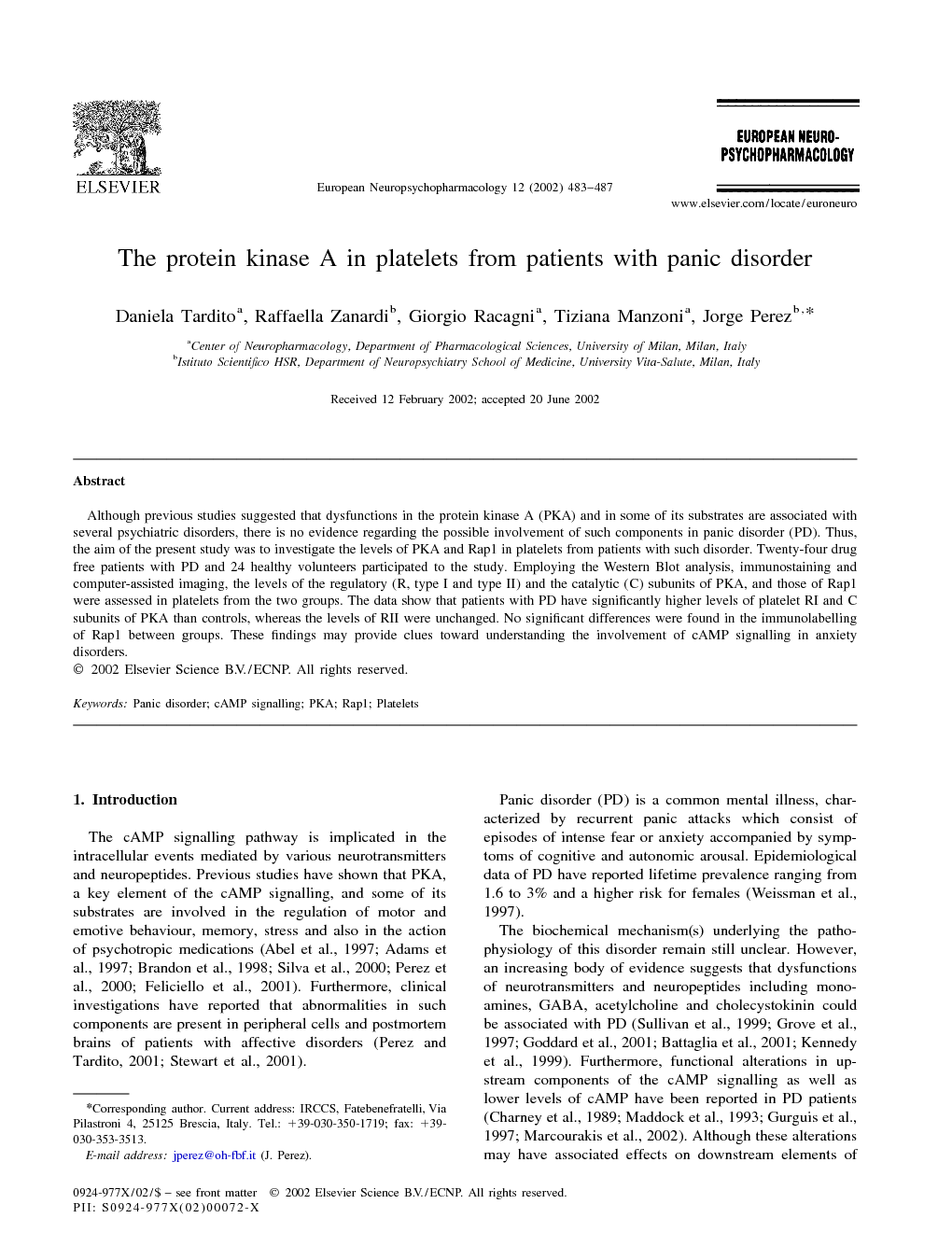 Although previous studies suggested that dysfunctions in the protein kinase A (PKA) and in some of its substrates are associated with several psychiatric disorders, there is no evidence regarding the possible involvement of such components in panic disorder (PD). Thus, the aim of the present study was to investigate the levels of PKA and Rap1 in platelets from patients with such disorder. Twenty-four drug free patients with PD and 24 healthy volunteers participated to the study. Employing the Western Blot analysis, immunostaining and computer-assisted imaging, the levels of the regulatory (R, type I and type II) and the catalytic (C) subunits of PKA, and those of Rap1 were assessed in platelets from the two groups. The data show that patients with PD have significantly higher levels of platelet RI and C subunits of PKA than controls, whereas the levels of RII were unchanged. No significant differences were found in the immunolabelling of Rap1 between groups. These findings may provide clues toward understanding the involvement of cAMP signalling in anxiety disorders.

The cAMP signalling pathway is implicated in the intracellular events mediated by various neurotransmitters and neuropeptides. Previous studies have shown that PKA, a key element of the cAMP signalling, and some of its substrates are involved in the regulation of motor and emotive behaviour, memory, stress and also in the action of psychotropic medications (Abel et al., 1997, Adams et al., 1997, Brandon et al., 1998, Silva et al., 2000, Perez et al., 2000 and Feliciello et al., 2001). Furthermore, clinical investigations have reported that abnormalities in such components are present in peripheral cells and postmortem brains of patients with affective disorders (Perez and Tardito, 2001 and Stewart et al., 2001). Panic disorder (PD) is a common mental illness, characterized by recurrent panic attacks which consist of episodes of intense fear or anxiety accompanied by symptoms of cognitive and autonomic arousal. Epidemiological data of PD have reported lifetime prevalence ranging from 1.6 to 3% and a higher risk for females (Weissman et al., 1997). The biochemical mechanism(s) underlying the pathophysiology of this disorder remain still unclear. However, an increasing body of evidence suggests that dysfunctions of neurotransmitters and neuropeptides including monoamines, GABA, acetylcholine and cholecystokinin could be associated with PD (Sullivan et al., 1999, Grove et al., 1997, Goddard et al., 2001, Battaglia et al., 2001 and Kennedy et al., 1999). Furthermore, functional alterations in upstream components of the cAMP signalling as well as lower levels of cAMP have been reported in PD patients (Charney et al., 1989, Maddock et al., 1993, Gurguis et al., 1997 and Marcourakis et al., 2002). Although these alterations may have associated effects on downstream elements of cAMP signalling, no evidence is available regarding the involvement of such components in PD. Thus, the aim of this study was to assess the levels of PKA and Rap1 in patients with PD.